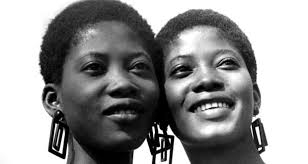 The Lijadu Sisters, Taiwo and Kehinde Lijadu, are identical twin sisters from Nigeria who were an important music duet from the mid-1960s to the 1980s. They achieved success in Nigeria and had modest influence in the United States and Europe. They were notable for being a West African version of the Pointer Sisters who mixed Afrobeat sounds with jazz and disco, according to one source. Since the late 1980s, they retired from the music scene. The Lijadu Sisters produced a handful of albums showcasing their tight harmonies and inventive incorporation of synthesizers and modern pop forms into funky Afro-beat grooves.

Born on October 22, 1948 in Jos, the Lijadu sisters who are second cousins of Fela Kuti began singing at an early age. The talent was nurtured by their mother, who bought music records by artistes such as Aretha Franklin, Miriam Makeba, Ray Charles, among others. “We sing together everyday. It’s a natural thing. We come from a musical background of poets and they sing in church. When you grow up in that kind of environment it tends to rub off on you,” they told The Fader in an interview in 2011.

Taiwo and Kehinde Lijadu grew up in Ibadan and were given musical direction in the early stage of their career by Lemmy Jackson, a music producer. The twins, who have been inseparable since birth, make music in English and other African languages.

After signing a contract with Decca Records in 1969, they released their first album titled ‘Iya Mi Jowo’ (‘Mother Please’). In 1972, the sisters performed at the 1972 Munich Olympic Games alongside ‘Salt’, a band which consisted of Ginger Baker, whom the sisters met in 1971. Describing their music, the sisters told The Fader that “Whatever we do as singers, we have to think of what we will say that will gladden people’s heart”.

It took them seven years to drop their second album titled ‘Danger’ under Decca/Afrodisia. The following year, 1977 they released their third album which they titled ‘Mother Africa’. They kept the fire burning by releasing their fourth album ‘Sunshine’ under Afrodisia imprint in 1978. In 1979, the twins dropped their fifth album ‘Horizon Unlimited’, before going on a five-year break to later come back in ‘1984’ in ‘Double Trouble’ and their final album in 1997 ‘Orere Eligjigbo’ under a new record company, ‘Shanachie’.

The sisters suffered a setback in 1996, when Kehinde suffered spinal injuries after she fell down in their Brooklyn apartment where they lived on the first floor. Due to the complications, the Lijadu sisters had to stay out of public eye but would later resurface in 2011 to work with Knitting Factory Records.