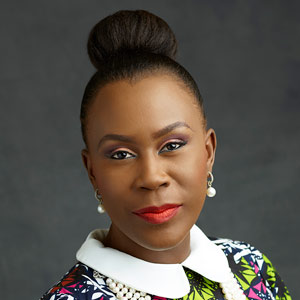 Tara Fela-Durotoye, a Nigerian makeup artist and lawyer, was born on the 6th of March 1977 at St. Nicholas Hospital, Lagos to John Ejegi Sagay, a Commissioner at the Service, Nigeria and Felicia Omaghomi.

The couple separated when she was eight months old; and being a polygamous home, she was brought up by her stepmother, Modupe Agnes Sagay. She started her education at Command Children School, Victoria Island and proceeded to Nigeria Navy Secondary School, Ojo, where she was a boarder. In form 5, she was made the Sanitary and Welfare Prefect. She graduated from the Lagos State University, with a degree in Law and proceeded to establish the House of Tara International.

She is married to Fela Durotoye, a business strategist and corporate activator, chief executive officer of Visible Impact. They have three sons, Mobolurin, Demilade & Morolaoluwa.

Fela-Durotoye is the managing director and Creative Director of House of Tara International, a Nigerian makeup company. The organisation has grown from a small make-up business started as an undergraduate in the Faculty of Law, Lagos State University in 1998 into a franchise enterprise with three main lines of business: the Make-up Studio, the Makeup School and the Tara product line comprising beauty products and professional make-up kits.

She is the founder and CEO of House of Tara International sand creator of the Tara Orekelewa Beauty range, Inspired Perfume and the H.I.P Beauty range.

In a series of firsts, she also launched the first bridal directory in Nigeria in 1999. In 2000, she facilitated the first-ever series of bridal seminars, drawing for the first time in Nigeria celebrated professionals in the bridal industry to speak to brides. She established the country’s first make-up school in 2004, and also launched the Tara product line, comprising a range of professional tool kits (such as make-up boxes, brushes and purses) for make-up artists and a wide range of make-up products including eye shadows, eye liner, lip gloss, foundation and powders. House of Tara today has franchises spread across Nigeria (branches in Lagos, Ibadan, Port-Harcourt and Abuja) and with emerging footprints on the West African coast in Benin, Ghana and Senegal.

Tara was also the brain behind the 2014 Makeup in Nigeria Conference (MINC), the first ever gathering of makeup professionals in Nigeria.

She is a graduate of the prestigious Stanford SEED Transformation Program and this has aided her work as a mentor for thousands of young women across Africa and a standout entrepreneur. Recognition has not been slow in coming – in 2013, she was listed as one of 20 Young Power Women in Africa by Forbes with the World Economic Forum also naming her as a Young Global Leader.

Unsurprisingly, the House of Tara, her flagship business has under her supervision won a kit full of awards including but not limited to the Right Vision Movement Award Creativity & Productivity Makeover Outlet of the year 2006, The Africa SMME Award presented in South Africa, the Entrepreneur of the Year award 2007 and the Creative Business Award of the Year, Success Digest 2008.

Her life’s work has been profiled on several international platforms including New York Forum Africa (NYFA), France24, Africa 24 by Reuters, Bloomberg and CNN’s African Voices, a weekly show that highlights Africa’s most engaging personalities, exploring the lives and passions of people who are shaping change in Africa.

Some of Fela-Durotoye’s national and international awards include:

• Entrepreneur of the Year (The Future Awards)
• Young Person of the Year 2007 (The Future Awards)
• Best Makeup Artist (Fashion and Style magazine)
• Award for Excellence in the Beauty Sector 2006(City People magazine)
• Pioneer Award for Beauty 2006. (Fashion and Style Award)
• Young Entrepreneur of the Year (Lagos Enterprise Award)
• Wedding Planner Honorary award for mentoring other make artists, January 2008
• Award for excellence (beauty), city people
• 1st lady award for Women empowerment
In its own right, House of Tara International has won a number of awards including
• Right Vision Movement Award Creativity & Productivity Make over Outlet of the year 2006.
• The Africa SMME Award presented in South Africa and the Entrepreneur of the Year award.2007
• Creative business award of the year, success digest 2008