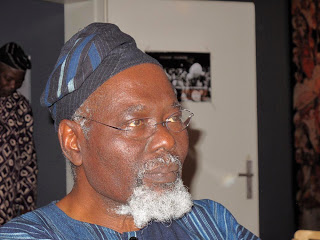 Professor Rowland Ola Abiodun is a John C. Newton Professor of Art, the History of Art, and Black Studies at Amherst College, Amherst, Massachusetts, USA. He is the author of Yoruba Art and Language: Seeking the African in African Art (2014), What Follows Six Is More than Seven: Understanding African Art (1995); and co-author of other books on Yoruba arts and culture. In 2011, he received the Leadership Award of the Arts Council of the African Studies Association in recognition of his excellence, innovative contributions, and vision in the fields of African and Diasporic Arts. He was a consultant for and participant in Smithsonian World Film, Kindred Spirits: Contemporary Nigerian Art.

Professor Rowland Ola Abiodun was born on July 25, 1941 in Owo, present day Ondo State. He attended high school at Government College Ibadan, Oyo State, Nigeria (1955-1960), and received his B.A. in Fine Arts with First Class Honors at Ahmadu Bello University, Zaria, Nigeria, in 1965. Professor Abíọ́dún went on to the Master’s program in Art History at the University of Toronto, Toronto, Ontario, Canada. He wrote a thesis on “The Origin of Ife Naturalism” in 1969. His early childhood was strongly influenced by traditional story tellers in his hometown, and he was also immersed in the Yoruba myths of creation and transformation. Legends of Ile-Ife accompanied by religious tradition made up his cultural education.

His exposure to traditional education in Yoruba art and culture fostered the direction of his lifelong research. Immersion in Yoruba language, artistic concepts, and belief systems enabled Professor Abíọ́dún to engage the philosophical notions at the heart of the Yoruba worldview. His thorough dedication to the study of African art is encapsulated in his written works, which convey his research in a format accessible to both insiders and outsiders to the field. Through all of these works Professor Abíọ́dún aims to directly engage his art subjects without inadvertently silencing or leaving out altogether, the voices of their creators and users.

A Yoruba culture bearer and an art historian, Professor Abíọ́dún centralizes the Yoruba language and culture as critical components of his research methods for the study and deeper understanding of Yoruba art. Starting with his earliest publications such as “Naturalism in ‘Primitive’ Art: A Survey of Attitudes” (1975), and “Ifa Art Objects: An Interpretation Based on Oral Traditions” (1975), his search for the interrelationship of verbal and visual arts has progressed with his most recent publication, Yoruba Art and Language: Seeking the African in African Art (2014).

His recent publication is simultaneously a work of art history, archaeology, and anthropology. He presents new insights into Yorùbá art and material culture by examining them through the context of Yorùbá language and praise poetry. The book encompasses decades of research and its reception reflects Professor Abiodun contribution to the field of African Art Studies both as an illuminating work and as a challenge to current research methodologies.

His book, Yoruba Art and Language: Seeking the African in African Art, merges the methods of art history, archaeology, and anthropology. It offers new insights into Yorùbá art and material culture by examining them within the context of the civilization’s cultural norms and values and, above all, the Yorùbá language. It begins by establishing the importance of the concepts of oríkì, the verbal and visual performances that animate ritual and domestic objects, such as cloth, sculpture, and dance; and àṣẹ, the energy that structures existence and that transforms and controls the physical world.

Through analyses of representative objects, Professor Abiodun demonstrates how material culture expresses the key philosophical notions at the heart of the Yorùbá worldview. He also draws on his fluency and prodigious knowledge of Yorùbá culture and language to dramatically enrich our understanding of Yorùbá civilization and its arts. His latest work includes a companion website with audio clips of the Yorùbá language, helping the reader better grasp the integral connection between art and language in Yorùbá culture.

Given his prominence in the field of African Art, Professor Abíọ́dún has been interviewed for various documentaries and television programs. Prominently, he worked as a Smithsonian World Film Consultant and Participant in relation to Kindred Spirits: Contemporary Nigerian Art (1990). He was also interviewed by the BBC for the World Service program, first for the “Art of Africa” series on the theme, “For Our Mothers and Gods across the World”, in 1998 and later for “The History of Africa” series focusing on the arts. In 2000, PBS interviewed Professor Abíọ́dún for “Religion and Ethics” with particular reference to the “Art and Oracle” exhibition at the Metropolitan Museum of Art, New York (2000).

Prof. Rowland Abiodun started his teaching career at the then University of Ife (now Obafemi Awolowo University, Ile-Ife) where he lectured for over 25 years. As one of the pioneers in Yoruba Studies, he was deeply involved in promoting the culture and language as scholars from different parts of the world streamed into and out of Ife in the heyday of the birth of modern African scholarship.

A die-hard academic, Professor Rowland Abiodun has co- authored several publications on different aspects of African Art and Culture. He is a well-sought-after keynote speaker on Black Studies worldwide. His contributions to African Art have earned him a good number of honours, accolades and scholarship awards.

Prof, as you will be turning 80 on July 25, 2021, DAWN Commission wishes you a happy birthday in advance.

You are an AKINKANJU!!!