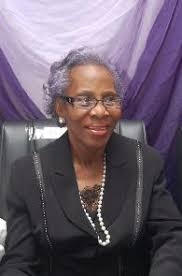 …the First Female Professor of Medicine in Nigeria

Professor Oyinade Olurin can truly be described as a woman who, in spite of being born with a silver spoon in her mouth, has still become, through her own effort, an achiever and pioneer in her professional field of ophthalmology. Oyinade was born in Ijebu-Ode, Ogun State, Nigeria, on the 2nd of February, 1934 to the well-known family of Chief and Mrs. Timothy Adeola Odutola. Her father was a prominent Nigerian industrialist and philanthropist with a passion for education, who had been honoured with the Order of the British Empire (OBE) by King George VI as far back as 1948. The Nigerian Government had followed suit with an OFR (Order of the Federal Republic) in 1966 and a CON (Commander of the Order of the Niger) later in 1982.

Oyinade was the sixth of Chief Odutola’s 27 children and had her early education through home tutoring before she was sent to the CMS Girls’ School, Ijebu-Ode. Her secondary education commenced in 1945 at the C.M.S. Girls’ School, Lagos, which later became known as Saint Anne’s School on relocation to Ibadan. She proceeded from there to the Westonbirt School, Tetbury in Gloucestershire, England for her ‘A’ Levels in 1952. In 1953, Oyinade was admitted to the University of Bristol Medical School to study medicine, a career she chose following her various childhood contacts with patients and doctors in Nigerian hospitals. She must also have been influenced in her choice of profession by her mother who was a nurse. She graduated with a medical degree (MB.Ch.B.) in 1959. She would return to the same University of Bristol years later for a Masters of Surgery degree (Ch.M.) in 1975.

After completing her first degree, she returned to Nigeria and was employed by the University College Hospital (UCH), Ibadan, where she did her house job in Medicine and Surgery, 1959-1960. She worked at the UCH until 1961 when she got married and travelled with her husband, first, to work in the State Hospital in Akure and then later to Cardiff in Wales at the Cardiff Royal Infirmary in 1962.

Professor Olurin had a most productive academic career during which she initiated and completed research on various pressing problems in Ophthalmology in Nigeria, among which are the following: the pattern of eye diseases in Nigerians; causes of blindness in primary glaucoma (a major cause of blindness in Nigeria). As head of department of Ophthalmology for close to two decades, she encouraged younger colleagues in research activities and her unique style of teaching at the undergraduate level encouraged many to go into the specialty of ophthalmology. She retired in 1986 and set up her private ophthalmology practice in Ibadan with her clinic appropriately named Vision House Clinic.

In the course of her career as an Ophthalmologist, she not only rose to the very top, she also succeeded in winning many laurels in her field. She holds a Masters’ degree in Ophthalmology and acquired many prestigious professional fellowships in the field of medicine: D.O. (England), F.R.C. Ophth. (Fellow of Royal College of Ophthalmology) UK; Fellow of the Royal College of Surgeons, FRCS (Ophthalmology), and Fellow of the West African College of Surgeons, (FWACS). She has also encouraged many women to come into the field of medicine as practitioners and to discuss issues which are relevant to their practice in this field. In recognition of her efforts, she was elected the President of the Medical Women Association of Nigeria.

Her interest, however, spanned other fields than Medicine. Like her father before her, Professor Olurin also has a flair for business where she is successfully holding her own as director or chairman in many companies. She is Chairman of the Board of Consolidated Breweries PLC; Board Chairman, Nexans Kabelmetal Nigeria, PLC; Board Chairman, Odutola Holdings Ltd and Crown Products Limited; and Board member of Unichem Nig. Ltd.

She has also spared time to give voluntary service for the development of her community through her membership of \]
‘/and active participation in many non-governmental organisation. She is, for instance, a founding member, and past President of Zonta International, Ibadan Chapter, and Patron of the Nigerian Society for Information, Arts, and Culture (NSIAC).

With her contributions in these fields has come due recognition: she is a Fellow of Tai Solarin College of Education, Ogun State, a gold medalist of the University of Lagos; she was appointed the Matron of YWCA Catholic Church, Ijebu-Ode, as well as that of Rev. Mellon Methodist Church, Sagamu. To cap it up, the Nigerian government recognized her achievements and contributions to national development by conferring on her the national award, Officer of the Federal Republic (OFR).

Oyinade was married to Professor Olaofe Olurin, who was also a retired professor of Surgery of the
University of Ibadan. They are blessed with three children who have made their mark in their own
professional fields, two of them are indeed ophthalmologists like her.