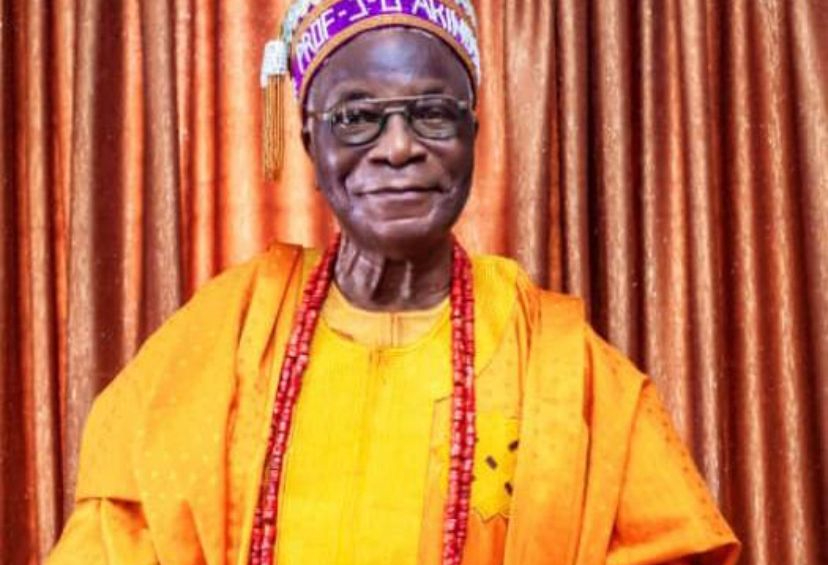 The Development Agenda for Western Nigeria (DAWN) Commission joins the family, friends and other well-wishers across the globe in celebrating with the famed oral & maxillofacial surgeon Professor Joel Ajani Oyekunle Akinosi.

Akinosi was born in Ishaga Onlado, along Ota/Badagry Road via Atan in Ado Odo/Ota Local Government Area of Ogun State. When viewed from all perspectives, the story of Professor Oyekunle Akinosi resonates with brilliance and determination. He was a brilliant student, right from his days in the primary school, All Saints Primary School, Araromi Orita, very close to Atan in Ado Odo/Ota Local Government Area of Ogun State. The same thing happened at the prestigious Abeokuta Grammar School, where he had his secondary school education between 1947 and 1952. But for his determination to succeed in life, his journey to the top would have been truncated after his secondary school education. His father died while he was still in the primary school, making secondary school a ‘community effort’ of sorts, where his uncles from both parents’ sides took over the sponsorship.

“My father died when I was still in the primary school,” he begins. “Then, the funding of my education became a joint effort of my uncles who did whatever they could do to help me buy books and paid my school fees. My mother was responsible for my feeding. It was through the joint efforts of my uncles from both sides of the family that I was able to go to secondary school.”

After secondary school, Akinosi was not under any illusion about the need to search for an employment to forge ahead in life. He was lucky to have secured one with the Federal Ministry of Education, as a clerk. Though he had to ride his bicycle from downtown Mushin to his Ikoyi office every day, he had his eyes set on furthering his education. He believed that through education, he had a brighter future. He registered for evening classes in King’s College, Lagos; and he used part of his little salary to pay his fees. He had enrolled to sharpen his knowledge in three science subjects -Physics, Chemistry and Biology.

Armed with good grades from Abeokuta Grammar School, where his contemporaries included the late Ooni of Ife, Oba Okunade Sijuwade; former Managing Director, Nigeria Hotels, late Chief Samuel Alamutu, among others, luck smiled on him when he was awarded a scholarship by the then Western Region Government in 1956 to read dentistry in the United Kingdom.

Akinosi, who recollects with sense of triumph and excitement, stresses:

“I first enrolled at Norwich City College for my ‘A’ Levels in October 1956. Because of the evening classes I had at King’s College, Lagos, I was almost ready for the examinations. I wrote a test and due to my brilliant performance, the school authorities said I should move to the second year. So, that was how I was ahead of my colleagues who got the same scholarship with me.”

As if to show that his performance during the test was not an accidental advantage, at the end of his ‘A’ Levels, he passed all the four papers excellently. So, in 1957, he was admitted to the London Hospital Medical College (University of London).
Using himself as an example, he states:

“Don’t ever give up on anything you want in life. If you don’t succeed the first time, try the second time, even the third time. When I was applying for the scholarship, I made three attempts before I succeeded. You have to be determined to succeed in life.”

From the first year, Akinosi, who was the only black student in dentistry in the institution, began to win laurels. He won the university’s prize for elementary clinical dentistry in 1958. After his first degree, due to his outstanding performance resulting in his graduation ahead of schedule, he was allowed by the Western Region Government to proceed to postgraduate studies in dentistry. Akinosi specialised in oral and maxillofacial surgery at the Royal London Hospital Medical College, Whitechapel, The Royal West Middlesex Hospital, Isleworth, UK; and finally at the Institute of Postgraduate Dental Surgery (Eastman Dental Institute), University of London. He was successful in the final fellowship examinations of both the Royal Colleges of England and Edinburg in November and December respectively in 1965; and thus became the first Nigerian to acquire such qualifications in oral surgery.

Talking about his area of specialization – oral and maxillofacial surgery – there are over 16 different specialties in dentistry. Professor Akinosi calls it a special area in dentistry which handles the treatment of patients involved in road accidents with impact on their face, head and neck. It also caters to patients with cancer of the mouth, cheeks and lips. Again, it handles deformities like the cleft in children (split lips).

When he returned to Nigeria in 1966, he was the only one in Nigeria with that specialty. He was employed as a lecturer in the University of Ibadan, specifically in the University College Hospital, where he lectured medical students. He worked as a Grade 1 lecturer from 1966 to September 1969. During that period, the first dental school in black Africa (University of Lagos Dental School) had been established, and the school was keen on having him. This was how he came to the College of Medicine, University of Lagos, where he worked till he retired in 1991.

After his retirement, Akinosi seemed not to be tired yet; according to him, there were still more grounds to cover in the field of medicine. He got an employment on contract as a consultant oral surgeon in Saudi Arabia. Due to his excellent performance, after three years, he was promoted to the position of the medical director in the hospital. After working for another three years, he was appointed overall supervisor of all the hospitals in the Qassim Region of Saudi Arabia from 1997 to 1999. Like a star that keeps shining wherever it appears, Akinosi recorded a number of feats even in foreign land. Since his return to Nigeria, he has been contributing immensely to the health sector.

Professor Akinosi who is now a nonagenarian still remains humble despite his world-renowned achievements in the realms of oral & maxillofacial surgery and dentistry as a whole. Even after decades of retirement, he is still highly sought for his knowledge, life experiences, moral values, anecdotes and unrelenting sense of humour. As a renowned national and international scholar and practitioner, the world has benefitted immensely from his brilliance, diligence, forthrightness and service to humanity.

Professor Akinosi, who has been married to Olubunmi since October 1, 1960, says the marriage has survived thus far based on what he calls the “principles of tolerance and understanding.”

We, at DAWN Commission, celebrate one of Nigeria’s finest-ever surgeons and wish him good health as he enjoys his well-deserved rest.

You are an AKINKANJU!!!