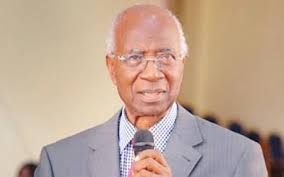 DAWN Commission mourns the passage of the foremost Professor of Medicine who died in Ibadan on Monday, June 15, 2020 at the age of 87 after a brief illness.

Professor Akinkugbe was born in Ondo capital of Ondo State in South Western Nigeria on 17th July, 1933.  His father, who was a chemist, belonged to an impressive family tree in Ondo traceable and connected in some distant past to the marble rich clan of Igbeti in Oyo State.

He grew up in a Christian home, his father being a people’s warder at St. Stephen’s church and a synod delegate for several years.  The regular routine of school, choir practice, Sunday’s Devotional Worship, Sunday school, evening service and other such engagements, left him with little time for frivolities after school.  However, whenever the opportunity presented itself, young Oladipo never failed to enjoy his juvenile frisk and frolic.

Professor Akinkugbe entered Ondo Boys High School in 1944 when science subject teacher. Inspired by physics, chemistry, biology and mathematics notes belonging to a boy who was attending another school outside of Ondo, young Oladipo decided to take entrance examination into Government College, Ibadan.  He made it to the interview stage, where he narrowly missed the admission.  His dreams seemed shattered, but providence came promptly to his aid as one of the admitted fee-paying students could not take up his own offer.  He was then called up from the waiting list.

Professor Akinkugbe had a smooth sail through GCI, where he established himself as an undisputed leader in science subjects.  After a brilliant secondary school career, he took entrance examination and gained admission into the University College Ibadan in 1951, to begin his study of medicine.

Here he proved himself, once again as a serious student, balancing academics with social and extra-curricular activities.  After passing his second MB examination in 1955, he was posted to University of London [the Royal London Hospital] for his clinical studies, where in 1958, he obtained his MBBS of London without any stress.  After completing a six-month internship at the London Hospital, Professor Akinkugbe then embarked on numerous short programmes in different institutions, expanding his knowledge and experience, and obtaining a diploma in Tropical Medicine and Hygiene from the University of Liverpool in 1960.

Being a Western Region Government scholar, Professor Akinkugbe came back to Nigeria in 1961 and took appointment with Government Specialist Hospital, Adeoyo, Ibadan.  But later that year he went back to England to do his Dphil. programme in Oxford.  On successful completion, he returned to Nigeria to take up lectureship at the Department of Medicine University of Ibadan in January 1965. Thus began Professor Akinkugbe’s brilliant academic career during which he became Professor of Medicine in 1968, Dean, School of Medicine between 1970 – 74 and Head of Medicine in 1972.

Taking special interest in Hypertension and Kidney diseases, he made tremendous contributions in these areas.  He attended over one hundred National and international Professional, scientific, educational and health conferences, in the past forty years, in all the continents of the globe.  He made presentations in many of these conferences.  Published many authoritative works, and received numerous awards.

He was a member and fellow of over twenty international organizations, societies and institutions. He was a recipient of the National Honour of Cote D’Ivoire.  Within Nigeria, Professor Akinkugbe was Foundation Chairman, Joint Admission and Matriculation Board [JAMB]; Principal and Foundation Vice Chancellor, University of Ilorin; Vice Chancellor, Ahmadu Bello University Zaria; Planning Committee Chairman, Ondo State University; Planning Committee Chairman, University of Abuja; Pro-Chancellor and Chairman of Council, University of Port Harcourt.   He was also instrumental to the opening of the famous hypertension and renal clinics at the University College Hospital, Ibadan.

Late Prof. Akinkugbe will always be remembered for his pioneering roles and contributions to the medical sector, especially the distinguished leadership he provided as Chairman of various academic and medical institutions. To each appointment he brought a very high degree of knowledge, skill, thoroughness, dedication and above all integrity and transparency.

He was an outstanding professional and scholastic role model.

May his soul rest in perfect peace.