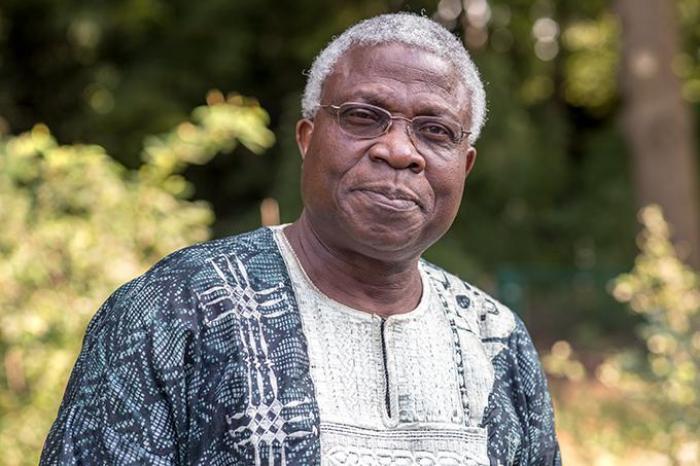 Professor Niyi Osundare was born in 1947 in Ikere-Ekiti, Ekiti State, Nigeria. He is a prolific poet, dramatist and literary critic, essayist, and media columnist. He was educated on three continents: B.A. (Honours) from the University of Ibadan, Nigeria, M.A. from the University of Leeds in England, and Ph.D. from York University, Toronto, Canada. The wide and varied exposure accruing from this has proved very useful for his writing and teaching careers.

He has always been a vehement champion of the right to free speech and is a strong believer in the power of words, saying, “to utter is to alter”. Osundare is renowned for his commitment to socially relevant art and artistic activism and has written several open letters to the former President of Nigeria (Olusegun Obasanjo), whom Osundare has often publicly criticised.

Professor Niyi Osundare has authored 18 books of poetry, two books of selected poems, (with individual poems in over 70 journals and magazines across the world), four plays, a book of essays, and numerous monographs and articles on literature, language, culture, and society. He regards his calling as a writer and his profession as a teacher as essentially complementary.

His areas of specialization are African Literature, Literature of the African Diaspora, Literary Stylistics, Sociolinguistics, and Creative Writing. In 2005, he was selected Fellow of the Nigeria Academy of Letters (NAL), the country’s highest Academy for the Humanities. About his passion for teaching, he has this to say: “For me, the classroom is a vital space inhabited – no, lived – by students and teachers as partners, even collaborators, in a process of intellectual and social inquiry and exchange …. I strive to be the kind of teacher who challenges and inspires…”

For his creative works, Osundare has received many prizes and awards: the Association of Nigerian Authors (ANA) Prize, the Cadbury/ANA Prize, the Commonwealth Poetry Prize (which he won on two different occasions, 1989 and 1994), the Noma Award (Africa’s most prestigious book award), the Tchicaya U Tam’si Award for African Poetry, and the Fonlon/Nichols Award for “excellence in literary creativity combined with significant contributions to Human Rights in Africa”. He was the recipient of the 2014 Nigerian National Merit Award, Nigeria’s highest recognition for distinguished academic and creative achievement.

He has carried out readings and performances of his works in many parts of the world, and his poems have been translated into French, Italian, Slovenian, Dutch, Spanish, Japanese, Arabic, Korean, and Serbian. In 2016, he was awarded the Doctor of Letters (D.Litt.) honoris causa, by his alma mater, the University of Ibadan, Nigeria. He has also been a recipient of honorary doctorates from the Universite de Toulouse-le Mirail in France and Franklin Pierce University in Rindge New Hampshire, USA. He was a columnist for Newswatch, a prominent Nigerian newsmagazine; he maintains a weekly poetry column (Lifelines) in Nigeria’s Sunday Tribune, and is a frequent newspaper, radio, and television commentator on current affairs. In June 2016, he was installed the pioneer Chair of the Advisory Board of the new Ibadan Literary Society (ILS), based in Ibadan, Nigeria.

The Niyi Osundare International Poetry Festival (NOIPOFEST), an annual festival of poetry readings, scholarly conferences, and literary/cultural outreach, which takes place in Nigeria each May, was established in honour of Dr Osundare in 2015.

Most recently, Dr. Osundare is one of two African writers (the other being Syl Cheney Coker, the eminent Sierra Leonean poet and novelist) selected by the American organization, Dialoguetalk, for a major feature documentary entitled The Poets. The filming took place in May 2016 in Sierra Leone (Coker) and Nigeria (Osundare).