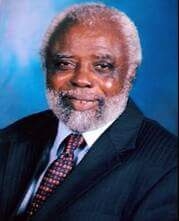 The First Professor of Architecture in Nigeria and Sub-Saharan Africa

Born to parents from Ekiti State, Adeyemi on 27th February 1937, he attended four different primary schools across various states before concluding his basic education in Ekiti State. His secondary education was completed at Christ’s School Ado-Ekiti in 1956. In 1963, he obtained a degree in architecture from Ahmadu Bello University. In 1965, he got his master’s degree from Columbia University. This was followed by another masters in Urban Planning from New York University in 1973. His PhD thesis was on Kaduna Capital Territory and Metropolitan Lagos: An Analysis of Administrative and Institutional Framework for Urban and Planning and Development and was completed in the same institution by 1974.

He started his lecturing career at Ahmadu Bello University in 1969, where he rose through the ranks to become the dean of faculty of environmental design in 1976. He was made a professor at the university the previous year. In 1982, Ekundayo went on sabbatical to University of sheffield as a visiting professor. In 1988, Ekundayo was appointed Deputy Vice Chancellor of Federal University of Technology Akure. Between 1999 and 2002, he was selected as Ag. Vice Chancellor of the school. In 2004, he came out of retirement to become the dean of College of Science and Technology and distinguished professor in Covenant University.

In a 2008 study titled Meaning and Relevance in Nigerian Traditional Architecture: The Dialectics of growth and Change, Adeyemi attempted to correct the misconception that Africans dwelled in “unstructured, isolated bush communities with little appreciation of the aesthetics in town design” by providing understandings on what shaped the ancient traditional architectures of buildings across the main ethnic groups in Nigeria, while providing insight and an holistic view on African buildings of old.

A 2014 paper titled Characteristics of Early Ecclesiastical Architecture in Lagos State in Nigeria by Adeyemi in Journal for Cultural and Design Studies noted that the period between early 1850s till the late 1920s started a major structural era in the kind of buildings designed in Nigeria. The study analyzed the five most important Christian facilities that was built during the period, while taking into consideration their distinctive properties. The findings from the publication was that the buildings were designed with minimal inputs, ideas and comments from nationals and the mechanism employed has changed over the years from what is being used today.

A Nominated Speaker at the African World Congress of the International Union of Architects in Cairo (1985) he was also a key participant, Conference on Architectural Education in the Islamic world organised in Granada, Spain in April 1986. He is also a Nominator for the Aga Khan Award for Architecture and he also represented the Africa Union of Architects in the UN Economic Commission Expert Group meeting on Regional Human settlements in Addis Ababa in 1983.

Professor Adeyemi is a fully registered Architect by the Architects Council of Nigeria (ARCON), a Fellow of the Nigeria Institute of Architects (NIA), and of the Association of Architect-Educators in Nigeria (AARCHES) He was a founding Council member of ARCON (1970-84) and also a founding Council member of the Africa Union of Architects (AUA). He has held several awards which include the Fellowship of the United States Agency for International Development (USAID) and of the Africa- America Institute (AAI).

Over a period of active academic pursuits, spanning thirty-three years before retirement he has mentored several junior colleagues who have later become senior academics including professors. In the time spent in Zaria and Akure, he has supervised hundreds of Master’s degree theses, more than twelve Ph. D Theses, two of which are in universities outside Nigeria, namely, Cambridge University, and the University Dundee, Scotland.

Professor Ekundayo Adeyinka Adeyemi is regarded as the first professor of architecture in Nigeria. He is also reported as being the pioneer academic to attain professorship in architecture in Sub-Saharan Africa.
DAWN Commission celebrates you Sir.

You are an Akinkanju!!!