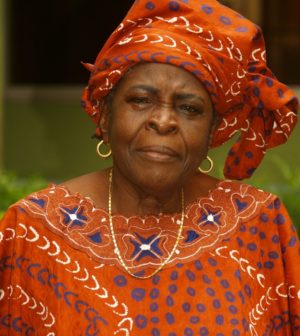 Guru of Women’s History and Development

In the history of Nigeria, there has been quite a number of truly outstanding women who have distinguished themselves in their various fields of human endeavor. Professor Bolanle Awe-a distinguished scholar, a feminist, an educationist par excellence-is one of such women. She was born on 28th January, 1933 in Ilesa, Osun State. Her father Pa Samuel Akindeji Fajembola of Alafara Oje, Ibadan, Oyo State was a manager with the famous John Holt & Co., a shipping and general merchandise company with a branch in Ilesa. Her mother, Mosebolatan, an Ijesa lady, was a professional teacher among the first set of girls to be trained in united Missionary College, Ibadan. The parents had met in Osogbo and on her father’s transfer to Ilesa, the young Bolanle was born there.

Bolanle spent the first eight years of her life in the big, bustling town of Ilesa, which was noted at the time for its active commercial life largely dominated by Lebanese and Ijesa traders operating in its famous main street, Adeti. With parents who could be regarded as well educated in the context of the standards of those days, she had no problems whatsoever with schooling, and was enrolled as a pupil in Holy Trinity Primary School, Omofe, Ilesa in 1939.

She continued her primary school in St. James’ School, Oke-Bola, Ibadan, where she passed out in 1945. For her secondary education, she gained admission in 1946 to C.M.S. Girls’ School, Lagos, the oldest of such schools for girls in Nigeria. Founded in 1869, the school was the first to field female students for the West African School Certificate and to teach science subjects. The school was later relocated from Lagos to Ibadan, and is now the famous St. Anne’s. She was among the first set to graduate from that school in 1951.

After successfully graduating from St. Anne’s, the next port of call which most of them in her class took for granted in those days, was moving on to a tertiary institution for further education. She secured a place in a public school, the Perse School for Girls in Cambridge where, from 1952 to 1954, she studied English, History and Latin for her Advanced Level Certificate. Thereafter, she was admitted to St. Andrews University, Scotland, where she read for a degree and graduated in History in 1958. Subsequently, she went on to do postgraduate work for a doctorate degree at the University of Oxford, as a student of one of its component Colleges, Somerville College, the oldest female College in Oxford. She spent two years there from 1958 to 1960 and later obtained a D.Phil (Doctor of philosophy) degree in History of the university in 1964.

On her return to Nigeria in 1960, she joined the Department of History, University of Ibadan on 1st October, 1960 as an Assistant Lecturer, thereby becoming the first Nigerian woman to be formally appointed a lecturer in a Nigerian tertiary institution. However, in 1967, she moved to the University of Lagos when her husband transferred his services from the University of Ibadan to that University. She got appointment in its School of African and Oriental Studies where she taught history to the students in the Department of History, and General African Studies, a compulsory course to all students of the university.

In December 1969 she came back to Ibadan when her husband again decided to return to the University of Ibadan as a Professor and Head of his former department. She was now appointed a Senior Research Fellow in the Institute of African Studies of the University where she was eventually promoted to Professor of Oral History in 1976. She would later serve as the Director of that Institute from 1983 to 1991. She became the founding Chairperson of its Women\’s Research and Documentation Centre (WORDOC), which was established in 1985, the first of its kind in Nigeria and designed to serve as a resource centre/library for the study of women in Nigeria and other parts of the globe.

Professor Bolanle Awe retired from the University in 1995 after some 35 years of meritorious service during which long stay, she had the privilege of learning about the workings of that University in all its facets-as a teacher and researcher, as part of the management and policy making, and as a unionist having been a member and, at one time, president of the Academic Staff Union (ASUU), University of Ibadan chapter.

Professor Bolanle Awe spent short spells away from the university system as a Commissioner for Education and, later, of Trade, Industries and Cooperatives in Western State, 1975-1978. She was also the founding Chair of the Nigerian National Commission for Women, 1990- 1992, which later served as the nucleus for the current Ministry of Women Affairs and Social Development. From 1994 to 1999, she served as the founding Country Director of John D. and Catherine T. MacArthur Foundation, an American Foundation which has been supportive, first, of reproductive health and rights of women, and is now actively involved in the development of higher education in Nigerian universities-notably, University of Ibadan, University of Port Harcourt, Ahmadu Bello University, Zaria and Bayero University, Kano.

She was the first National Secretary, Nigerian Association of University Women, 1962-1963; Secretary of the National Council of Women\’s Societies, Western Region Branch, 1971-1973. She was also a member of the founding committee of the International Federation for Research in Women’s History. That committee aimed at highlighting the hitherto often neglected contribution of women and putting their role in the development of their society into proper perspective. A notable example in this regard was Iyalode Efunsetan Aniwura who had been much vilified in oral traditions as in popular drama. Her biography by Professor Awe redeemed her image as one of the chiefs who contributed in no small measure to lbadan’s military greatness in the nineteenth century.

Apart from such extra-curricular activities, she served at various times on different government committees, councils of government boards and parastatals, the last being that of the Council of the University of Nigeria, Nsukka, where she was Chairperson and Pro-Chancellor. She was Chairman, Governing Council, University of Ilorin Teaching Hospital, Yeye’motan of Ibadanland. She was a Member of Council, Ajayi Crowther University, Oyo. Among her many awards are the following: National Honour of Officer of the Federal Republic of Nigeria (OFR) in 1983; and Honourary D. Litt., Bells University of technology Ota, Ogun State in 2012.

Professor Bolanle Awe has published extensively on the history of Ibadan, as well as in the area of oral history and women\’s studies. She is married to Emeritus Professor Muyiwa Awe and they are blessed with children and grandchildren.

DAWN Commission celebrates you for your outstanding achievements.