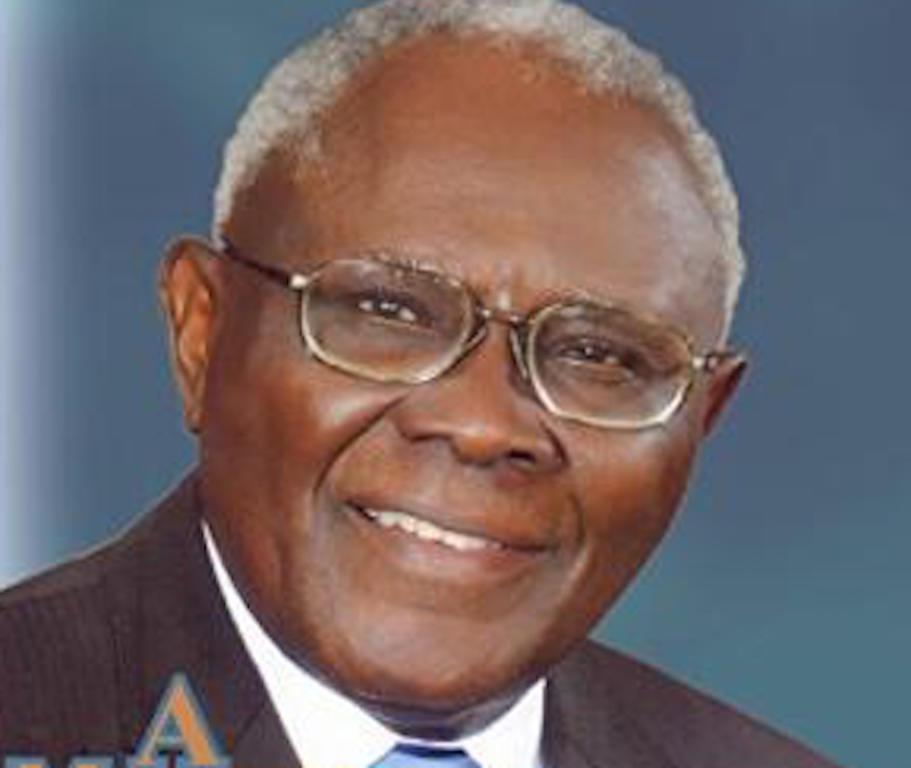 DAWN Commission commiserates with families, friends and associates of a disciplinarian, a man of unimpeachable pedigree, a first-class nationalist, scholar and one of our greatest assets in academia, Prof. Akin Mabogunje, who died on Thursday, August 4, 2022.

Akin Mabogunje is the first Nigeria’s Professor of Geography who served the University of Ibadan, as Head of the Department and Dean of Faculty of the Social Sciences among many other administrative leadership roles. Mabogunje has contributed significantly to the academic literature of contemporary geography, development, rural-urban migration, urbanization, and environmental challenges in Nigeria and Africa as a whole. For his academic and intellectual contributions to the country, Mabogunje was one of the earliest recipients of the Nigerian National Order of Merit, the first African to be President of the International Geographical Union, and the first African to be elected as a Foreign Associate of the United States National Academy of Sciences.

Professor Akinlawon Ladipo Mabogunje was born 90 years ago to late Pa Joseph Omotunde Mabogunje, a retired UAC official, and Madam Janet Adeola Mabogunje, a trader. Young Mabogunje had his elementary education at the Holy Trinity School and the United Native African Church School in Kano (1935-1941) and Central School Mapo Ibadan in 1942. His secondary education was at the famous Ibadan Grammar School (1943-1948).

His tertiary education began at the then University College, Ibadan where he earned a Bachelor of Arts (General) through the Egbe Omo Oduduwa scholarship, which he won in 1949 and earned B.A General degree in Geography in 1953. Not satisfied, Professor Mabogunje proceeded to the University of London where he earned a B. A (Hons.) degree in 1956; a Master’s and a Ph.D. degree in Geography in 1958 and 1961 respectively.

Professor Mabogunje started his professional career as a lecturer at the University of Ibadan in 1958. He became a senior lecturer in 1964 and a professor of Geography in 1965. Thus, at the tender age of 34 years and within seven years of joining the University staff, he had reached the highest level of his profession. This is a record which has been impossible to equal or break not only in the Department of Geography, in particular, anywhere in Africa, but also in the Social Sciences in general.

This distinguished scholar, who is often referred to as ‘the father of Geography and Social Sciences in Nigeria’, is the recipient of about 20 Honours in various academic, professional and administrative fields both at the national and international levels.

He received the following prizes and recognitions;

At the University of Ibadan, he was Head of Department of Geography (1972-1975); Dean Faculty of the Social Sciences (1968-1970) and Director, Planning Studies Programme (1972-1981). He was a member of Senate (1965-1981) and Chairman of many Senate and Council Committees where his contributions to the development of the University of Ibadan were enormous.

At the National level, he had served in various capacities both in the public and private sectors of the Nigerian economy. He was a member of the following prestigious post;

At the international level, Professor Mabogunje has also held many important positions either as a member, Chairman or President of about a dozen organizations. Among the most notable ones are being Vice-President of the International Geographical Union (IGU) (1980-1992), an organization of which he later became the First African to be President (1980-1984). He was also Vice-President, Governing Council for Pan African Institute for Development (1972-78); Vice-President, Governing Council for Pan-African Institute for Development, Douala Cameroon (1978-1984); Chairman, International Committee for Overcoming Hunger in the 1990s (1988-1994); Visiting Research Fellow, World Bank, 1990; Member, Executive Committee, Senior African Leadership Forum (1992-date); Adviser to the Secretary General, United Nations Second Conference on Human Settlements (1994-1999).

He has published many book chapters, journal articles, conference papers, solicited papers, technical reports, books and monographs in locally and internationally outlets among which includes:

As for journals, articles or book chapters, one cannot but mention a few such as System Approach to Rural-Urban Migration (1970); Manufacturing and the Geography of Development in Tropical Africa (1973); Towards an Urban Policy for Nigeria (1975); Growth Poles and Growth Centers in Regional Development of Nigerian (1978); The Dilemma of Rural Development in Africa (1981); A New Paradigm for Urban Development (1992); The Environmental Challenges in Sub-Saharan Africa (1995); and Preparing African Cities for the Bond Market (1998).

Professor Mabogunje has consulted for all levels of government in Nigeria, the Local, State and Federal levels on diverse topics of development. At the international level, his contributions are all notable having consulted for such varied organizations as the United Nations Research Institute for Social Development in Geneva; International Council for Scientific Unions; the International Labour Organization (ILO); the Population Council, New York; the African Studies Association; UNCHS; UNDP and UNESCO, among others.

Professor Mabogunje has served in several capacities, which include;

Here in Nigeria, anybody that has been acquainted with the field of geography and where it is applied, particularly in areas of regional and town planning, must have come across Mabogunje. He has been the dominant national figure in the field. His books on the subject have been widely read in universities as well as in secondary schools. Across the continent here, he is reputed to be the first black African to earn a PhD in the subject and also the first to become a Professor of Geography, thus earning the sobriquet, the Father of African Geography.

What is unique about Prof. Mabogunje and why he is so admired is the way he carries his massive knowledge of geography into the realms of general human concerns. And it was exactly this that he brought to the realization of Abuja as a Federal Capital City (FCT). When the military regime led by General Murtala Mohammed decided in 1975 to shift Nigeria’s capital, Lagos, to a more central location in the country, the government found that it knew very little about the virgin land that constituted most of the new area. Professor Mabogunje was tasked with leading the team of scientists mostly from the universities that scoured the area to provide vital information on the ecological condition of the new territory. This information included flora and fauna, land use, census of the human population, people to be displaced, range of their assets and compensation to be paid, etc.

It was a back-breaking two-year assignment that would take him to the wilderness that later become the FCT, on a regular weekly basis from his base in Ibadan. Interestingly he had hands of assistance from Commander Murtala Nyako, then Military Governor of a freshly created Niger State who gave him a base in Minna and attached a senior administrative officer, Awwal Ibrahim as anchor and guide. In a few years ahead Awwal Ibrahim was also to become the civilian Governor of Niger State in 1979 and is today the Emir of Suleja. Obviously, it is the success of this intense preparatory work that is clearly evident in what is Abuja today.

Professor Mabogunje has always been a bridge of sorts between the university and the locals in the city, the town and gown, with a vision to use his knowledge of geography in the service of rural communities and the nation in general. His advice, in that regard, is always highly valued by successive governments of the federation. He is reputed to be the brain behind the creation of the Directorate of Foods, Roads and Rural Infrastructure (DFRRI) in 1986 which was set up to provide social and economic infrastructure in the rural areas. He remained a key player in DFFRI until 1990 when another of his ideas metamorphosed into the Board of Community Banks.

Professor Mabogunje is a tireless promoter of community banking, touring all nooks and corners of the country. The idea caught on like bush fire, and by the time he resigned from the Board in 1994 over 1300 community banks had been established all over the country. Today those community banks have become the cornerstones of micro-finance banks. Thereafter he was very much sought after to chair commissions, committees and panels which in one way or the other were always associated with urban and regional planning.

The Presidential Technical Committee on Land in Nigeria which he has been chairing since 2009 is probably still an outstanding assignment. Professor Mabogunje has received far too many awards in his lifetime to allow mention in this short piece. But the foremost should be that of the Vautrin-Lud Prize of 2017. It is the highest honour in the field of geography and is highly coveted. It is probably why it is referred to as The Nobel Prize of Geography. Since the prize was instituted in 1991, Professor Mabogunje is the first African to be named a recipient. Now, the FCT where he did a lot of the ground-breaking work, should be counted among those that have honoured him.

As a renowned national and international scholar, the world has benefitted immensely from his brilliance, diligence, forthrightness and service to humanity.

Western Nigeria and its people will never forget the role he played as a member of several committees that later birthed the Western Nigeria Development Agenda which culminated into the setting up of DAWN Commission by Governors of the States of Western Nigeria (SoWN). Together with other likeminds, Prof. Mabogunje has consistently provided intellectual capital to consolidate democracy in Nigeria and has also been very active in driving reforms and improving performance within the public sector. He has also worked hard to put the issue of restructuring on the national front burner and he continues to be at the forefront ofr the struggle for true federalism.

Prof. Akin Mabogunje was an embodiment of intellectualism, dedication, hard work, and the community spirit; ever willing to give back his intellect, time and resources for the greater good of humanity. He was a man of impeccable character and an outstanding gentleman.

May his gentle soul rest in peace.