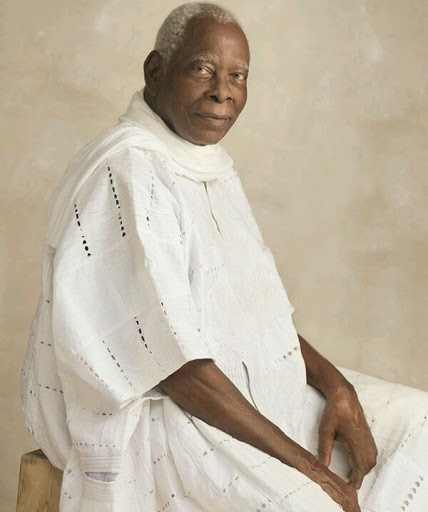 The Quintessential Master Artist and Educator

Widely regarded as one of Nigeria’s most celebrated contemporary artists, Yusuf Grillo has led a prolific career that has shaped the discourse of modern art in the country. Emerging to prominence and international recognition in the 1960s and 1970s, Grillo’s work is deeply influenced by the characteristics of traditional Yoruba philosophy and sculpture. As a member of the Zaria Arts Society, popularly known as the Zaria Rebels, Grillo combined his training in the Western representational style with a focus on Nigeria’s unique and rich artistic history. He is particularly known for the specific use of the color blue in his paintings, a reference to adire and resist-dye textiles used in Nigeria.

Born in 1934 in the cosmopolitan city of Lagos, Yusuf Grillo grew up in the core Lagos metropolis; an urbane settlement historically christened Brazilian Quarters. Grillo’s grandfather was one of the returnees from Brazil to their African homeland after the abolition of the slave trade. Most of the returnees came back to West Africa with specialised skills, broader world view and western education. The Brazilian Quarters in Lagos therefore became an arena for the convergence of Yoruba cultural practices, manifesting in seasonal religious festivals, rites and rituals. It was within this mix of socio-cultural diversity that Yusuf Grillo grew up.

Suave, urbane and cosmopolitan, Yusuf Grillo was brilliant and multi-talented. By the time Grillo enrolled for higher study in Fine Arts in Zaria in 1956, he was far more exposed to the undercurrents of creativity than most of his schoolmates. The school curriculum was imported from the Royal Art School and replete with colonial imprints. Propelled by the prevalent wind of independence in the late 1950s, the radical members of the Zaria Art Society, of whom Grillo was a prominent member, took academic liberty to explore indigenous themes.

They also incorporated formal characteristics of African art and craft traditions into their synthetic style. Four of the Zaria Art Society members, including Yusuf Grilllo, were to become very famous in later years due to their diverse creativity and exemplary commitment to the development of contemporary Nigerian art. Grillo stood out as a great painter with a distinct capacity for excellent draughtsmanship. He equally demonstrated versatility as a competent sculptor, muralist and stained glass designer. The superstructure of Yusuf Grillo’s artistic creativity is built on a solid conceptual foundation that is cast with the finest alchemy of talent and intellect. A phenomenal genius, Grillo is gifted with a sixth sense that enables him to effortlessly envision life’s complex dimensions. He continually searches for the ideal, the novel and the experimental in art. He engages diverse materials and methods to interpret seemingly simple and profane subject matter that are actually coded in complex humanistic philosophies. Grillo is one of the artists that appropriately defined modern African art as a synthesis of the old and the new. The old was the indigenous cultural artistic practices of Africa, while the new was the Eurocentric stylistic variables that were promoted by the West all over African countries, especially during the colonial years of the twentieth century.

The Zaria Art Society, founded by a group of young art students in the late 1950s in the present day Ahmadu Bello University, Zaria, Nigeria, became epochal with their theory of Natural Synthesis, which guided their art practices after graduation. Members including Yusuf Grillo were not held hostage by the popular European conceptual art paradigms. Rather, they individually explored their indigenous cultures and appropriated its inherent art styles to suit modern artistic tendencies.

Yusuf Grillo interrogates the traditional style of Yoruba carving and translates the forms into two-dimensional paintings, using excellent draughtsmanship to achieve schematic images that are seemingly arrested in restrained motion. The forms, often classified as Stylised Naturalism, have elongated figural images cast in elegant poses. He creates overlapping planes both in the foreground and the background of the composition. The figures and images are made to resonate with a sublime effusion of mauves.

As a member of the Zaria Art Society, his interest in the interrogation of indigenous ideals was kindled by like-minded colleagues. He experimented with Cubist forms, using bolder geometric shapes. His use of angular structures found appropriate correlation in the Yoruba wood carving style. He successfully domesticated the Western naturalistic style by employing motifs of Yoruba traditions in his paintings. Typical of his formal characteristics is the use of Yoruba dresses, which accounts for the peculiar sartorial elegance of his figures. Relics of culture such as traditional drums, ritual staffs and appurtenances, and icons of royal and economic motifs constantly manifest in his paintings.

The themes of his works are often derived from everyday human conditions but exemplified within a Yoruba indigenous context. His use of colour is mature, tamed and cool. He lavishes shades and tints of violet, green and blue in selected portions of the composition, thereby not only creating thematic emphasis, but also generating profound textural and visual aesthetic qualities. Yusuf Grillo is a master of compositional arrangement. He orchestrates series of geometric planes in his pictures both as forms and as design elements. He fuses the fore-figures with the background through a seemingly innocent tonal differentiation or hard edge demarcation. He obliterates visual partitions by unifying his compositions with suggestive ambivalent structures. Back in his schooling days in Zaria, a lecturer had hinted that Grillo’s paintings looked like stained glass because of the linear angularity of planes that defined his pictorial compositions. This triggered his interest in stained glass, coupled with the continuous tutelage under Paul Mount, Grillo’s respected mentor in art. Paul Mount was a British multi-talented artist who introduced informal art lessons into Yaba College of Technology in the 1950s. He handed the lessons over to Grillo in 1962 when he and some of the expatriate staff relocated to Europe due to the post independence indigenisation policy in Nigeria. After attending a training workshop in Bradford in Britain to learn more about stained glass techniques, Grillo adapted the techniques to suit more readily available materials such as plexiglass.

He is now the most famous stained glass designer in Nigeria, having done many splendid installations in various churches. In spite of being a devout Muslim, Grillo grasps biblical concepts with ease and interprets the commissioned themes with a recognizable imprint of his painting characteristics. Grillo thus started a series of stained glass paintings that were conceptually and stylistically generated from his paintings. Grillo certainly did not spin out stained glass copies of the paintings; his intellectual and innovative faculty is too superior for self-imitation. He transformed the painting elements and principles into a more technical and overwhelming method of production. The translucent nature of glass added to the glow of his subtle use of colours.

Perhaps the most enduring legacy Grillo bestowed on contemporary Nigerian art is his faithfulness to Yoruba culture without ossifying traditions. He represents a creative bridge that filled the transitory gap between dynamic Yoruba wood carving traditions and contemporary Yoruba art. His works are creatively expedient, original and modernist in outlook. Apart from creatively adopting and modernising the traditional wood carving style, Grillo also celebrates the sartorial comeliness of Yoruba attires. He always selects appropriate indigenous dresses to enhance his thematic relevance. The range of garments used by Grillo includes casual, ceremonial, ritual, religious and royal dresses.

He particularly extols the virtues of women by depicting them in fashionable clothing. He even creatively adapts the typical Yoruba attires by modernising the design to suit the various ambiences of human attitude and character. For example, Grillo exaggerates and elongates sizes, styles, folds and knots of the head gears and clothes worn by some imprudent and impudent ladies. The backgrounds of Grillo’s paintings are deliberately geometrised using a simple and complex interface of structural rectangles, squares and triangles. Subdued forms of local architecture commonly found in urban towns and cities in Yorubaland are indirectly implied.

Grillo uses the principles of convergence and dispersal to create three-dimensional illusions by harmonising both areal and linear perspective points. Even in the use of colour, Grillo’s inspiration comes from the Yoruba chromatic tradition. He derives his colour schemes primarily from blue, purple and green and merely accentuates contrast by selecting the correlates in the colour wheel. Grillo valourises purple even in its imbued royalty and makes mauves more sensitive to our affective domain. Any observer of Yoruba culture will immediately notice the tonal affinities of Grillo’s pigments with the indigo dyes and its derivative shades of purple and green.

It is also observable that Grillo’s colours also identify with the Yoruba Aso Oke type, which often comes in strips of Prussian blue and deep purple. Yusuf Grillo’s subject matter is generated from everyday life events around him. He is also fond of making social or religious comments by alluding to biblical or Islamic stories. His religious conceptualisation of themes is interpreted both in content and form with the matrix of Yoruba visualisation. He makes puns in a humouristic manner by engaging day to day issues with poetic commonalities.

The titles of his works are often slangs and expressions that are derived from street usage. As a devout Muslim, Grillo equally explores Islamic themes from both the faith and the practice perspective. His creative adaptation of themes situates the universal in the local, while the indigenous is also made global. He espouses a humanistic philosophy that recognises human beings as social animals with a generic attitude to life. Grillo uses Yoruba culture as a humanising pedestal to unify divergent races, religions and societies.

His comportment is replete with wisdom and piety while discussing philosophical and religious mysteries. His heart is as immaculate as the white dresses he always wears. With his unique contributions to the development of contemporary Nigerian art and art education, it will surely be written of him that “a creative genius walked this contemporary path”.

We wish you more years of creativity to the world.