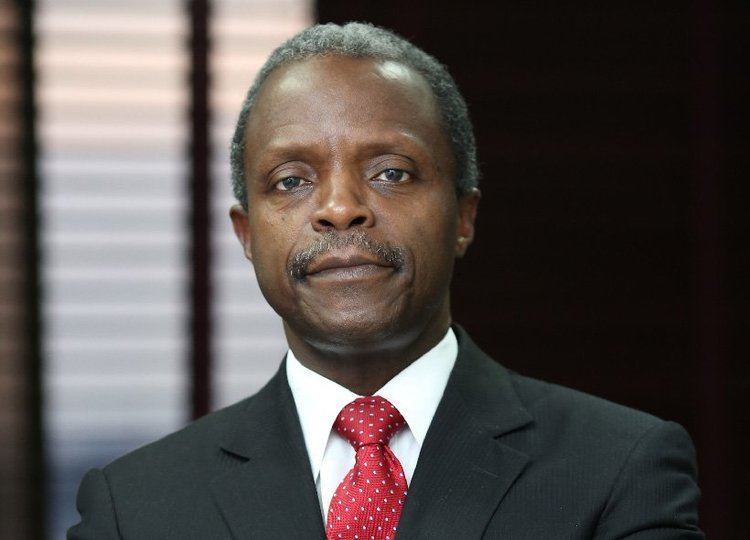 DAWN Commission celebrates the Vice President of the Federal Republic of Nigeria, Professor Yemi Osinbajo, SAN, GCON on the occasion of his 63rd Birthday Anniversary on Sunday, 8th March, 2020.

Oluyemi Oluleke “Yemi” Osinbajo, SAN, GCON, a Nigerian Politician and Lawyer, is the current Vice President of the Federal Republic of Nigeria. He was sworn into office on the 29th day of May, 2015. He is also a Senior Advocate of Nigeria, Professor of Law and until his inauguration as Vice President, a Senior Partner with SimmonsCooper Partners, a commercial law practice.

Yemi Osinbajo was born into the family of Opeoluwa Osinbajo on 8 March 1957, Creek Hospital, Lagos. Osinbajo is married to Dolapo (née Soyode) Osinbajo, a granddaughter of Chief Obafemi Awolowo. They have three children – two daughters, Damilola, Kanyinsola and a son, Fiyinfoluwa Osinbajo.

Yemi Osinbajo was educated at Corona Primary School, in Lagos. Between 1969–1975, he attended Igbobi College Yaba, Lagos, where he was the winner of the State Merit Award (1971); the School Prize for English Oratory (1972); Adeoba Prize for English Oratory (1972-1975); Elias Prize for Best Performance in History (WASC, 1973); School Prize for Literature (HSC, 1975); and African Statesman Intercollegiate Best Speaker’s Prize (1974). Thereafter, he studied for his undergraduate degree at the University of Lagos between 1975-1978 when he obtained a Second Class Upper Degree in Law. Here, he also won the Graham-Douglas Prize for Commercial Law.

In 1979, he completed the mandatory one-year professional training at the Nigerian Law School whereon he was admitted to practice as a Barrister and Solicitor of Nigeria’s Supreme Court. In 1980, he attended the London School of Economics & Political Science, where he obtained a Master of Laws degree. From 1979–1980, Osinbajo served the compulsory one-year youth service as a legal officer with Bendel Development and Planning Authority (BDPA), Bendel state. In 1981, he was employed as a law lecturer at the University of Lagos, Nigeria. From 1983 to 1986, he was Senior lecturer of Law at the University of Lagos. From 1988 to 1992, he was an Adviser (legal advice and litigation) to the Attorney-General and Minister of Justice, Bola Ajibola. Osinbajo began lecturing at the age of 23. From 1997 to 1999 he was made Professor of Law and Head of Department of Public Law, University of Lagos.

From 1999 to 2007, Osinbajo was Member of Cabinet, Lagos State Ministry of Justice, also Attorney-General and Commissioner for Justice. From 2007 to 2013 Osinbajo was once again employed as a Professor of Law, Department of Public Law, Faculty of Law, University of Lagos.

In 2007, Osinbajo was made Senior Partner, Simmons Cooper Partners (Barristers and Solicitors), Nigeria. Osinbajo was also a Senior lecturer at the Lagos State University.

Other past roles include: Until 2015, Yemi Osinbajo was the Pastor in charge of the Lagos Province 48 (Olive Tree provincial headquarter) of The Redeemed Christian Church of God.

After the formation of the All Progressives Congress (APC) in 2013, Yemi was tasked, with other notable Nigerians, to design and produce a manifesto for the new political party. This culminated in the presentation of the “Roadmap to a New Nigeria”, a document published by APC as its manifesto if elected to power. The highlights of the Roadmap included a free school meal plan, a conditional cash transfer to the 25 million poorest Nigerians if they enroll children in school and immunise them. There were also a number of programs designed to create economic opportunities for Nigeria’s massive youth population.

On 17 December 2014, the presidential candidate of the All Progressives Congress, retired General Muhammadu Buhari, announced Osinbajo as his running mate and vice-presidential candidate for the 2015 general elections. On 31 March 2015 Buhari was confirmed by the Independent National Electoral Commission (INEC) as the winner of the presidential elections. Thus Osinbajo became the Vice President-elect of Nigeria. They were both sworn in on 29 May 2015. On 17 August 2017 VP Yemi Osibanjo described hate speech as a form of terrorism.

Yemi Osinbajo assumed office after taking oath of office on 29 May 2015 at the Eagle Square, Abuja. As the Vice President of the Federal Republic of Nigeria, he is expected to oversee the economic planning team and report, as well as make recommendations, to the president who takes the final decision.

Because of his legal background and antecedents as a commissioner for justice in Lagos state for eight years, many expect that he will contribute a great deal to the much needed reform of the judicial system at the national level. During the 2014/2015 campaigns of the All Progressives Congress (APC), Yemi Osinbajo held numerous town hall meetings across the country as against the popular rallies that many Nigerians and their politicians were used to. One of his campaign promises, which he has recently reiterated, was the plan to feed a school child a meal per day. Beyond feeding the school children, he has emphasized how this plan had created jobs for those who make it happen.

President Muhammadu Buhari wrote a written declaration on May 9, 2017 to the president of the senate and house of representatives on his decision to embark on a medical trip, the letter was read on the 9 May 2017 at plenary of both houses, senate and house of representatives respectively. Vice president, Professor Yemi Osinbajo was conferred the acting president during president Buhari’s medical leave. On 7 August 2018, Osinbajo fired the State Security Service boss, Lawal Daura for illegal invasion of the National Assembly by armed and masked operatives of the department. Daura was replaced with Matthew Seiyefa.

In January 2019, Osinbajo criticized the fact that social media is currently “under multi-jurisdictional regulation”. He called for more collaboration among nations to reach a convention to regulate social media and counter hate speech. On 2 February 2019, Osinbajo’s helicopter crashed in Kabba, Kogi State. He survived and delivered a previously-scheduled campaign speech after the crash. In the speech, he said he was “extremely grateful to the Lord for preserving our lives from the incident that just happened. Everyone of us is safe and no one is maimed.”

On May 29, 2019, he took his oath of office to begin his second term at Eagle Square in the capital of Abuja.

Following the Federal Government’s decision to close the nation’s land borders in October 2019, Osinbajo explained that the government did so to gain the attention of other nations to the importance of policing the borders. He argued that China and other nations were smuggling in products, including agricultural ones, undermining the Nigerian economy and threatening Nigerian agriculture. By closing the borders, Osinbajo said that the government was helping protect the economy and Nigeria’s producers and farmers.

In October 2019, Osinbajo criticized the government’s proposed social media regulations, stating he did “not think that government. regulation is necessarily the way to go.” Instead, he asked citizens to take more active steps to police social media. He stated that citizens and leaders, both political and religious, “owe a responsibility to our society and to everyone else, to ensure that we don’t allow it to become an instrument” of war. He also warned people against using social media to spread “religious disinformation”, which could lead to conflict and war.

During a visit on 3 November 2019 to Daura, the Emir of Daura, Faruk Umar, called Osinbajo “the most trustworthy Vice President of Nigeria” and thanked him for his loyalty to President Buhari’s administration. The Emir gave him the title of Danmadamin Daura, the highest traditional title in the emirate. President Goodluck Jonathan conferred on Osinbajo the Grand Commander of the Order of the Niger on May 28, 2015.

He is a member of the following professional bodies:

Professor Yemi Osinbajo, who clocked 63 on Sunday, March 8, 2020, has been described by many as a dandy of diction, a well of wisdom, a proboscis of brilliance, a totem of intellect, a tendon of integrity, an exemplar of excellence, an edification of dignity and above all, a PATRIOTIC Yoruba man.