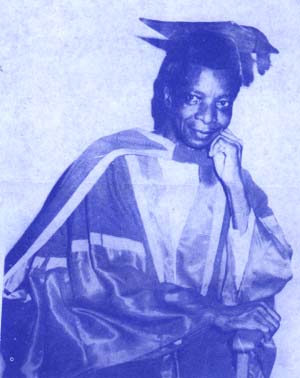 The 1st Professor of Mathematics in Nigeria

Dr. Adegoke Olubummo, with James Ezeilo and Chike Obi, was one of a trio of black (indigenous) mathematicians who pioneered modern mathematics research in Nigeria. He pioneered the establishment of the Forum for Functional Analysis and its Applications and the Nigerian Mathematical Society. Many of his Ibadan students went off to earn the doctorate in mathematics; e.g., T. O. Adewoye, Olusola Akinyele, S. K. Assiamous, V. A. Babola, the Senator S. O. Iyahen, E. O. Oshabi, and O. Popoola.

Professor Olubunmo, who passed on at the age of 69, was apparently the most renowned son of his community during his lifetime and yet was very humble. He was part of the league of eminent Ekiti academics that brought prominence to their fatherland and contributed to the respect accorded the Ekiti for their scholarship and academic brilliance in the history of Nigeria.

He loved his root, home town and associated with them as evident in being among the 1st set of Ekiti elites abroad who built befitting country houses in their respective home towns as far back as 1960s.

Adegoke Olubunmo was the son of the honored first literate Olorin of Orin, H.R.H. Oba William Adekolawolu Olubunmo II and Olori Abigael Osarayi Olubunmo. As a child of parents of high honor, he received an excellent education at Methodist schools in which he worked (Ifaki Methodist School) as a pupil teacher in 1937.

He was born in the early 1920s into a royal family in Orin-Ekiti. He attended Methodist Primary School, Ifaki-Ekiti and concluded his Standard Six at Christ’s School, Ado-Ekiti in 1936/37 which included his name among the 1st set of the foremost school in Ekiti. His quest for higher education did not stop as a Methodist trained and certificated teacher, he proceeded to Freetown and Timbuktu for further studies. How he made the journey to Sierra Leone still remains an unresolved mystery to most of his associates.

A product of Fourah Bay College where he met Chief Michael Adekunle Ajasin who was instrumental to his coming to Imade College Owo in 1949 where he worked as a Mathematics and English teacher. Among his students at Imade College was a retired Chief Judge of Ondo State, Justice Adeloye.

In 1951 Professor Olubunmo traveled to Britain and within five years he returned to Nigeria as a PhD holder in Mathematics. Before the turn of a decade he became the first Professor of Mathematics in Nigeria. A testimony of his scholarship and successful academic exploits. His students attested to the fact that punctuality was his hallmark, coupled with brilliance embedded with humility and forthrightness.

He was indeed an embodiment of decency, who imparted convention of respectable behavior to the people around him and this he did by example and certainly not by precept.

To this writer it was a privilege growing-up to know the erudite Professor Olubunmo as a devoted person to his true friends as evident in his condolence message to the family subsequent to the transition of Chief D.O. Adetunmbi, I quote: “Accept my sympathy on the transition of a man I know was very close to you as a father and friend.

You can all take consolation in the certain knowledge that your father lived a truly wonderful life in all respects. For my part, I count myself most fortunate to be numbered among his friends, to have shared his experiences, his joys and sorrows and his deep friendship, sincerity and loyalty for over fifty years. May his great soul rest in peace”

Professor Olubunmo was someone with strong passion for traditional ceremonies and cultural events. He was strict yet kind and approachable. Every opportunity he had he was always bringing his nucleus family to Ekiti to enable them interact with his siblings, relations and family friends. He was inclined to planning his visits to Ekiti such that it afforded him the opportunity to see some annual traditional festivals in his community and environs.

There were few instances when his family came to join his very close ally the Adetunmbis to see Ikosun and Okorobo festivals at Ifaki as far back as 1960s. He had a very liberal disposition to life which explained his inter-tribal marriage to his beloved wife of Calabar origin. Like every other mortal he had his own share of low periods when he lost his devoted wife and mother of his three brilliant children in the late 1970s.

He was a pleasant family man who was blessed with and survived by Yewande, a First Class product of University of Ibadan, under the age of 20 years, Ronke, Gboyega a software Engineer based in USA and Mrs Olubunmo who took care of him until his transition. He retired from the University of Ibadan to take up an appointment with his budding home state institution, Ekiti State University, Ado-Ekiti where he served meritoriously until his transition in October 1992 and his body was laid to rest on November 14 1992.

All three of Adegoke Olubummo’s children are mathematicians. His daugher, Yewande Olubummo, is currently in the United States of America in the capacity of an assistant Professor of Mathematics at Spelman College.