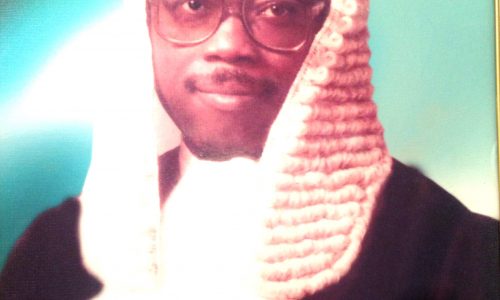 Prince Bolasodun Adesumbo Ajibola was born on March 22, 1934, in Owu near Abeokuta, to the Owu royal family of Oba Abdul-Salam Ajibola Gbadela II, who was the traditional ruler of Owu between 1949 and 1972. He attended Owu Baptist Day School and Baptist Boys’ High School both in Abeokuta between 1942 and 1955. He obtained his Bachelor’s degree in Law, LLB, at the Holborn College of Law, University of London between 1959 and 1962 and was called to the English Bar at the Lincoln’s Inn in 1962.

He returned to Nigeria to practise law, specialising in Commercial Law and International Arbitration and soon added the high professional plume of Senior Advocate of Nigeria, SAN, in 1980. It was largely due to his efforts during that period that the practice of Arbitration and Alternative Dispute Resolution, ADR, became composite parts of Nigerian legal practice.

By 1984, the task to lead the Nigerian Bar Association, NBA, naturally fell on him. His brilliant performance as NBA president caught the attention of the then military President of Nigeria, General Ibrahim Babangida who appointed him Attorney General and the Minister of Justice of Nigeria from 1985 to 1991. In his six years tenure as minister, Ajibola was reputed as the only public servant that never collected salary from government. While serving as Attorney General, he appointed Professor Yemi Osinbajo, now Vice President of the Federal Republic of Nigeria, as his Special Assistant.

Thereafter, he threw his wig into the highly competitive ring for a seat on the International Court of Justice, World Court. Prince Ajibola went through the laborious selection process and became a judge of the court from 1991 to 1994. He had actually threaded that road behind late Justice Teslim Elias whom he understudied as a guide. It is on record that he was in the habit of writing not less than 80 pages of judgments per night as a world court judge. As a judge, Ajibola had his way with words and was also a maverick of idioms and proverbs. Oftentimes, his judgments and opinions were backed by the rich Yoruba proverbs.

Ajibola exited the international court and took up a position in 1994, as a member to the Permanent Court of Arbitration with respect to the court’s deliberations on the land dispute between Nigeria and Cameroon. Not surprisingly, it was only him and Justice Koroma of Sierra Leone that ruled favourably for Nigeria out of 15 Judges when judgment was passed on October 22, 2002.

His sterling performance at these various roles earned him the award of  Knight of the British Empire by Her Majesty Queen Elizabeth II and the honour, Commander of the Federal Republic, CON.

In spite of his crowded international commitments, Prince Ajibola accepted to serve as chairman of the panel set up by the Plateau State Government to probe the 2008 Jos riots. His far-reaching conflict containment recommendations at the end of the panel, is still a reference point for conflict resolution across the world.

In 1999, he was again sent back to the global scene, this time as Nigerian Commissioner to the United Kingdom. He also doubled as an ad hoc Judge to the World Court on the hearing of the case between Nigeria and Cameroon over Bakassi Peninsula.

During his time in the UK, he visited the country’s biggest Islamic Centre at Leicester and, being a religious person himself, he decided to make a replica of the Centre in Nigeria hence, upon resigning his position as High Commissioner and returning to Nigeria, he established the Islamic Movement for Africa (IMA), which he planned to use as umbrella body for all the projects, programmes and activities that he would involve himself with in retirement, which would enable him to continue to give back to the society that made him and also to humanity.

Prince Ajibola’s life has not only been about Nigeria and the world, his community service impact is equally far-reaching. During his tenure as Governor, Gbenga Daniel appointed him as Chairman of the 50-member star-studded Ogun State Elders Consultative Assembly. Ajibola gladly accepted the position and utilized his ebullient clout to form a high level advisory, consultative and collective ombudsman for the practice of good governance in the State.

Perhaps, one of Ajibola’s most cherished legacies is Crescent University, Abeokuta, a private university he founded in 2005 through a parent body, Islamic Mission for Africa, to impact not just knowledge but good moral conduct on youth. Because of his commitment to the enthronement of excellent morals in youths, Prince Ajibola sold virtually all he had to found the university. That University and International Model College, a secondary school which he also founded, is by far one of the biggest success stories of Nigeria’s educational system.

He is bold, outspoken, courageous and kind-hearted. His leadership and human relations skills are without compare and his patriotism and nationalism are beyond reproach. This unique role model whose life is a study in academic, brilliance, courage, perseverance, persistence, patience, patriotism, enterprise, focus, humility, selflessness, modesty, human decency and moral rectitude is indeed a book for all ages and all generations. He was the editor of Nigeria’s Treaties in Force from 1970 to 1990 and All-Nigeria Law Reports from 1961 to 1990. He has authored over 20 books and various papers and articles on a range of legal subjects.

In an attempt to give insight into what royalty really means, an unknown author once wrote: “A crown! What is it? It is to bear the miseries of a people. To hear their murmurs, feel their discontents, and sink beneath a load of splendid care.” That insight perhaps is the closest description of the man, Prince Bola Ajibola. Though born into royalty, the Olori Omo Oba of Owu Kingdom has spent virtually all his royal life serving humanity and dispensing justice.