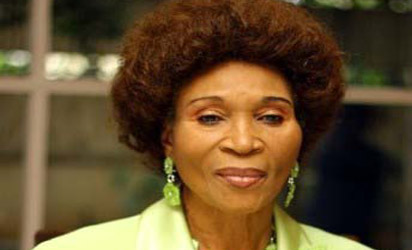 Otunba Ayora Kuforiji Olubi, a Nigerian Noblewoman, a Banker and a former Federal Minister of Commerce, Joins the League of Octogenarians today!

Otunba Ayora Kuforiji Olubi is a renowned Economist, a Chartered Accountant, a Banker, a Chartered Secretary and an Environmentalist.

She is, today, celebrated as one of the most successful women in the Banking industry. This is indeed a laudable feat as the patriarchal society we live in encourages female marginalisation whereby women are regarded as only being good for the kitchen, and the banking industry, on the other hand, is a highly male-dominated one.

Blessed with a sprawling physical structure, admirable facial features that blend with rare intelligence, Otunba Ayora can best be described as a woman of substance as no one has been in doubt as to the fact that she has earned herself a place in Nigeria’s business pantheon. She has achieved more “firsts” than most people can imagine as she has an entrepreneurial spirit and she is no doubt a resilient woman of fervent ambition.

Born on September 28, 1936, she had a sheltered life like any growing up child from an upper-middle class family. Interestingly, rather than get carried away with her family opulence, her childhood and adolescent years prepared her for the life ahead.

As she noted, it was the period of tutelage for her either traditionally, on the home front with her parents or with the people she lived with to acquire more knowledge or prepare her educationally for the future. That also facilitated the laying of the foundation for her as a person, what she wanted to be in life and what she wanted to do, all which combined to condition her life generally.

Otunba Ayora began her career as a Grade-II teacher at Zawan Girls Catholic Primary School in Jos, where she rose to become the headmistress at age 19, a feat she attested to was as a result of her brilliance in school.
Her quest to acquire more knowledge made her to jettison the teaching job as she proceeded to the University of London where she did her A Levels and also graduated with a degree in Economics in 1963. In 1964, she became a fellow of British Chartered Institutes of Company Secretaries, ACIS.

Thus, immediately after her degree in accountancy, she entered into the banking profession and scaling through the ladder to the top of the profession, a feat which made her the first female chairman of a leading financial Institution, United Bank for Africa Plc in 1984.

As a woman of many firsts, diligence and hard work, Otunba Ayora Chaired and served on the boards of many companies. She was the first Nigerian woman to be CEO of a multinational company, VYB Industries Limited and the first female Chairman of a public company quoted on the Nigerian Stock Exchange, Bewac Plc.

She served on the board of the National Institute of Social and Economic Research (NISER) from 1980 to 1983. She was also the first woman to preside over the Institute of Chartered Accountants of Nigeria (ICAN) when she was appointed its 25th President from 1989 to 1990. While she was in the office she introduced the Accounting Technicians Course.

She was the first chairman of Ogun, Osun River Basin Development between 1976 and 1980.She was also the Vice Chairman, National conference on Nigerian foreign policy from 1990 to 2000, member National Sport commission 1986 to 1989. She was a foundation member and chairman, Lagos State Education endowment fund (1988–1999).
Otunba Ayora was a deputy chairman & Hon. Federal commissioner for Ogun state at the revenue mobilization. In 1993, she was appointed Minister of Commerce and Tourism in the Interim National Government headed by Chief Ernest Shonekan.

Then, she was noted for her diligence and hardwork as she had to stay up till 2.am in her office treating files.
Otunba Ayora, has been a woman, who loves making a difference in all spheres. Her passion for the well-being of women and children led her to establish a foundation called Ayora Trust Foundation which is a multi-faceted foundation for education, religion, arts, mediation and various charitable works.

The foundation was formally established about five years ago, but before then, she had done a lot of undocumented charity works, as she decided to establish it formally so as to leave a legacy for her children as they get on in years, and in so doing they would know what to do when she is gone to great beyond. As it is, all her children are trustees of the foundation.

As a shining example to Nigerian women of the depth and height that feminine gracefulness and assiduity can reach, indeed, she can be described as a firm woman.

While it is obvious that a lot of women carve in under intimidations from their male counterparts in the course of their career, Otunba Ayora never allow male chauvinism to make her give up. For instance, looking at her achievements, recalling that gender discrimination, which she regrettably said exist in the corporate world, she noted that she had a way of confronting such attitude from men.

According to her, “I do my best to show that I have the intelligence and the intellect to hold on to my position. That’s why I always advise people to be sure they merit whatever position they are given.”

In an effort to strengthen the presence of Nigerian women in business, Otunba Ayora found the Society of Women Accountants of Nigeria. One of the people very close to her, former President Olusegun Obasanjo once described her life as “a shining example of the rich dividends available to those who persevere in the pursuit of their dreams and are willing to pay the price of diligence, hard work and determination”.

The President further described her as “a role model to Nigerian youths, especially girls and young women who desire to make something worthwhile of their lives”.

She has represented Nigeria on many international fora: between 1990 and1999. She was Nigeria’s representative on the World Business Council for Sustainable Development (WBCSD) and in 2003, she was an Honorary Ambassador of the UNIFEM (United Nations Development Fund for Women).

Apart from her enviable role in the finance sector, she has a lot of publications to her credit. Her publications include: the female Entrepreneur and Financial Management for Survival 1987, Civil service reform in a developing Economy 1988.

The corporate Woman, a marginalised group, problem and Strategies for success, vide public enlightenment programme of the institute of Directors 1989; Technical education as a catalyst for technical cooperation and Economic growth in developing Countries 1992 and co-author of Changing Courses.

Otunba Ayora has accrued several awards and honours which include: Doctor of Business administration from Enugu State University of Science and Technology, 1997, Doctor of Laws, LLD (Honoris Causa), Bayero University, Kano State, 2004, Doctor of letter (Honoris Causa) , Olabisi Onabanjo University, Ago Iwoye Ogun State 2006. Other honours and awards include the National award of member of the Order of the Niger in 1979, for her contributions to management education and socio- economic Advancement of Nigeria.

She was conferred with the award of Order of the Niger (OON) in 2002, award of certifi cate of Merit by the United Nations Decade of Woman, 1980, Award for Excellence from the University of Benn’s Skonit Club in 1988, honorary Grammarian of CMS 1988 by CMS grammar school, award of Excellence by Brigade of Nigeria, 1992, International award of Excellence for outstanding entrepreneurial achievements, MIT, Cambridge, MA, USA. 1992.

She was also a recipient of 2002 conferment award for Woman of achievements under the auspices of the Woman development centre, Abuja, 2005.

Otunba Ayora hold many chieftaincy titles from different geo-political zones of the country. In early 1990, she was conferred with the title of Ahaneji- Agamba 1 of Isu-Nkwere (meaning the name that goes to places or opens doors). She is also the Asiwaju Iyalode of Ibadanland, Suada of Egba, Igbokodo-Okeona, Lika of Ikija from the quarters where her paternal grandmother came from.

She was also honoured in Efik as Adaidake- Egburutu, one of the highest chieftaincy titles that can be given to anyone in that land.
According to her, it was in recognition of some of the developmental processes she undertook in that community then.

She is indeed an amazon and an epitome of excellence.
We wish you many more years in good health even as you celebrate your 80th birthday.