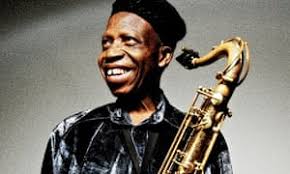 Orlando Julius is a Nigerian musician, singer, songwriter and multi-instrumentalist. He is credited as one of the first musicians to fuse US R&B into traditional highlife music, creating his own influential Afrobeat sound during the mid-‘60s. Fondly called OJ by his friends and admirers, Orlando Julius Aremu Olusanya Ekemode, is, indeed, the last of Nigeria’s titans in the highlife music genre, which he has modernised to Afro-soul.

An indigene of Ijebu-Jesha in Osun State, Orlando was born in Ikole-Ekiti to a family of merchants on September 22, 1943. He started his music career at the elementary school in Ikole-Ekiti where he learned how use some musical instruments such as drums, flute, bugle. He played drums and flute for the school band, as well as for a local group known as Mambo Dance Band. His father’s sudden death at the beginning of his high school informed his movement to Ibadan in the 50s where he started to learn music. In keeping with the tradition of the time, he started an apprenticeship with Ademola Haastrup (aka. Jazz Romero), one of the brightest horn players in Nigeria at the time. Orlando first landed a job with Romero’s band playing trap drums. He was not only impressed with the band’s organisation but also judged it to be the one of the best equipped in the country for musical instruments.

During that period, Chief Obafemi Awolowo was the premier of Western Region and due to unavailability of a school of music in the Region he caused his party, Action Group (AG) to establish one at the party’s secretariat at Oke-Ado, Ibadan. This provided a great opportunity for up-and-coming musicians to practice their skills and become professionals. Julius was taught there on various instruments and attributes his success as a musician to the persisting influence of his experience in Ibadan.

In early 1958, he went to Ondo  with Haastrup to start the Modupe Dance Band. He played drums with the band whilst continuing to learn saxophone and, in June 1958, he played the alto saxophone for the first time on stage. Towards the end of 1958 the band moved on to Akure and were renamed as the Flamingo Dandies Band. After a short time, Orlando decided to move back to Ibadan to gain more experience.

Relocating back to Ibadan, Orlando returned to the Action Group band and began to travel frequently between Lagos and Ibadan. In Lagos, Orlando played in Nyingifa‘s band while, in Ibadan, he played with Rex Williams at the Mayflower Club. In 1959, Orlando landed a job with Eddie Okonta and his Top Aces band at the Central Hotel and Paradise Club, a major step for Orlando in his career. While playing with Eddie Okonta, Orlando had the opportunity to welcome Louis Armstrong to Ibadan. Within Eddie Okonta’s band, Orlando was appointed the horn arranger and parts scorer and enjoyed a fruitful period, playing on WNTV, Ibadan’s ‘First In Africa’ and touring extensively across Nigeria.

In 1960, after the Nigerian Independence celebrations, Orlando traveled to Ijebu-Ode to work with Y.S. Akinibosun’s Right Time Dance Band and worked with them for over six months. Thereafter, he moved to Ilesha where he joined the late Dr. I.K. Dairo’s band. In those days, he was able to arrange some songs for the band, which included Salome, Mo F’ara Mi Fun E, and many others. Moving up, he later established a 10-piece band, Orlando Julius & His Modern Aces and the band performed regularly at Independence Hotel, Oke-Bola, Ibadan. With the band, he was able to release his first 45 single, titled: Jaguar Nana and it was released by Phillips Records in 1963. Lots of singles and extended albums were also recorded by Phillips Records.

By 1963, Orlando had started forming his Modern Aces band in Ibadan. The name Modern Aces was chosen because of Orlando’s unique style and modernisation of highlife music. The new band played in parties, universities, clubs and weddings and began to build a significant following nationally. In mid-1964, following the success of ‘Jagua Nana’, Orlando was signed to play a weekly weekend show on WNTV in Nigeria, produced by Segun Shofowote. During this time, he met and worked with Ambassador Segun Olusola and many other TV producers including Orlando Martins. Orlando was then contracted to play on the Bar Beach Show on Channel 10 in Lagos, where he worked with producer Art Alade and others.

In 1967, Orlando changed his band’s’ name to Afro-Sounders, essentially an expanded version of the Modern Aces featuring new members. The new big band played many shows across Nigeria, Benin and Ghana and recorded two further albums for Phillips in Lagos: ‘Orlando’s Idea’ and ‘Ishe’, each evolving its own sound as changes and new sounds propelled forward the Lagos music scene. These albums featured a heavier, funkier highlife fusion, responding to rock, psychedelia and the raw funk sounds coming in from the USA. The band scored further hits between 1968 and 1970 with ‘Alo Mi Alo’, ‘Home Sweet Home’, ‘Psychedelic Afro Shop’ and ‘James Brown Ride On’ among others.

In 1972, at the invitation of his label, Polydor, Orlando travelled to Western Germany, Switzerland and the USA on recording deals. Orlando’s band continued to play at home in between tour dates with regular gigs at Club Chicago in Surulere, Gondola night club, Bata Koto and many others in Lagos.

In 1974, he returned to USA after recording the ‘Disco Hi-Life’ album for Jofabro, featuring Dora Ifodu. He worked in Washington DC with Melvin Deal as Artist-In-Residence at the city’s colleges and universities and soon formed his own new band, Umoja. He later worked with Hugh Masekela in the writing and production of ‘The Boys Doin’ It’ (1975) and ‘Colonial Man’ (1976), including the tracks ‘Ashiko’, ‘Excuse Me Please’ and ‘A Person Is A Sometime Thing’.

From the song ‘Going Back To My Roots’ which included the bass and guitar riffs from ‘Ashiko’, Julius echoed the theme of the song by adding a Yoruba chorus, translated as “let us remember where we came from”. The song was a landmark, the first time that a Nigerian artist had recorded in his own language with a leading American artist. The song became a hit on U.S. commercial radio and a subsequent cover by London-based group Odyssey took the song to number 5 in the US charts.  Around this time, Orlando appeared in the film ‘Roots: The Next Generation’

In 1978, Orlando moved back to the Bay Area near San Francisco. To further his knowledge in the recording field, he studied audio engineering and production in Bear West Studios and also studied film production at the Berkeley Film Institute. Orlando also attended Laney College in Oakland for photography, television production and further music courses. While studying he was still performing, teaching American musicians about world beat rhythms and Afro Beat music and, under his tutelage, many world beat bands formed in the Bay Area and San Francisco including Big City, Freaky Executives, Zulu Spear and more.

Between 1980 and 1983 at the Scarab Club in Berkeley, California, Orlando and his band would feature musicians from different popular groups including Sheila E, Coke and Pete Escovedo. He continued to play live on the same bill as John Lee Hooker, B.B. King and Art Blakey at the Keystone Corner in San Francisco. He also played in colleges, clubs and festivals with his friend Prof. C.K. Ladzekpo from Ghana, a professor of music at U.C. Berkeley.

In 1984, Orlando returned home to Nigeria to begin recording his album ‘Dance Afro Beat’ at EMI Studios in Lagos, eventually releasing it through Shanachie in the US. Following successful sales, Orlando returned to Nigeria to release the album in his homeland and create some accompanying videos. With the videos for the tracks ‘Adara’ and ‘Dance Afro Beat’ (recorded in the Osun Shrine and at Badagry beach respectively), Orlando set the pace for music videos in Nigeria, setting a new, high professional production standard.

In 1994 Orlando moved to Nashville, Tennessee to work with Ambrose Campbell. Whille based in Nashville, Orlando produced the television programme ‘Afrobeat Videos’, presenting African music videos on a local Nashville channel. Orlando constructed his own warehouse recording studio, Afro Beat Studios, and recorded the album ‘The Legend Continues’. Disney released the movie The Lion King later that year and Orlando and His Nigerian All-Stars were invited to play for the launch event in Florida.

Yearning to return home, Orlando moved back to Nigeria in December 1998. By 1999, Orlando had set up a new recording and rehearsal studio in Surulere, Lagos, and recruited musicians to form a new incarnation of his Nigerian All-Stars. By 2001, Western audiences had begun to wake up to Orlando’s illustrious career. UK label Strut reissued the 1966 album ’Super Afro Soul’ before other labels including Soundway and Vampi Soul began releasing his Afro Sounders recordings, all spreading the word on OJ’s pioneering influence.

Back home, Orlando spearheaded The Nigerian Musicians Forum with the help of Eko FM and LTV8 to tackle the problems of the nation’s ailing music industry. The forum openly discussed the issues of piracy, mechanical fees, professionalism, past problems and solutions. He also recorded movie soundtracks for Wale Fanu’s ‘Owo Blow’, Tunde Kelani’s ‘Saworoide’ and Tunji Bamishigbin’s ‘Eku Ida’ among many others. Passionate about reviving highlife music, he also recorded albums for Nigerian legends including Fatai Rolling Dollar and Alaba Pedro, guitarist from Roy Chicago’s band.

Orlando moved to Ghana in 2003 after playing a concert at Panafest (the long-running Pan-African Historical Theatre Project). He set up a studio in Accra and recorded his most recent album there, ’Longevity & Reclamation’ and later moved back to Nigeria in 2008.

Other recent projects have included recordings with Hot Casa signing Setanta including a cover of his classic ’Ijo Soul’ and sessions with young musicians in Nigeria for a British Council project in association with Soundthread. He also performed his first ever gig in the UK in September 2013 with The Heliocentrics for Afri-Kokoa at London’s Rich Mix venue.

Orlando Julius is married to Latoya, who he met in the 90s through Ambrose Campbell in Los Angeles, USA, when he needed a good singer and dancer.