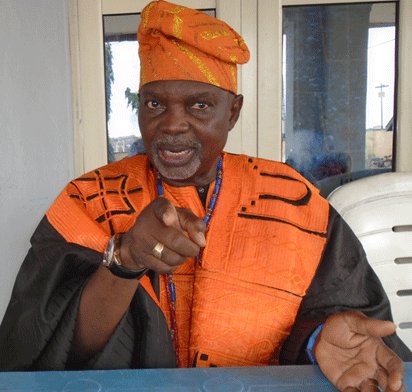 Oloye ‘Lekan Alabi, is a Journalist, an Author, a PR Consultant, a Syndicated Columnist and a Motivational Speaker. He is the Agba Akin Olubadan of Ibadanland and Cultural Ambassador of the National Museum,Ile-Ife. He was born on October 27, 1950 in Ibadan, Oyo state.

Oloye ‘Lekan Alabi was the Guest Speaker at the 9th Edition of the DAWN Yoruba Historical Conversations which held on Friday, 27th April, 2018

He attended African Church Grammar School, Apata Ganga, Ibadan (1964 to 1969). He was a class teacher at St John’s Anglican Primary School, Akinajo near Arulogun, Ibadan from 1971 to 1972, from where he took employment as the first Editorial Assistant at Onibonoje Press Limited, Ibadan.

In 1973, he was employed by the Sketch Publishing Company Limited, Ibadan as a Reporter/Writer/Reader Grade 2. He became the company’s youngest and first dual columnist, also in Nigeria.

He went to the famous College of Journalism, ‘Fleet Street’, London in 1976 and did his graduation in 1978. He came back to Sketch and resigned from it to join Nigerian Television Authority (NTA), Ibadan. He was there from 1978 to 1982. In 1982, when the present Broadcasting Corporation of Oyo State Television was established – it was then known as Television Service of Oyo State – He was one of the pioneer editorial staff, when the station started transmission on October 30, 1982. He was the first reporter to appear on the Channel and also the first chairman of the station’s chapel of the Nigerian Union of Journalists (NUJ). In 1983, he was seconded as a Press Secretary to the late Chief ‘Bola Ige, then Governor of old Oyo State(today’s Oyo and Osun States).

Oloye Alabi, was recalled from his sack in 1984 by the new Military Governor of Oyo State, then Lt-Col Oladayo Popoola. It will be recalled that Dr Omololu Olunloyo of the NPN, who FEDECO declared the winner of the 1983 governorship election in Oyo State, sacked many civil and public servants accused of being ‘Bola Ige/UPN loyalists.
He was Press Secretary from 1983 to 1989. So, he served four governors, three military officers and one civilian, for a period of six years.
In recognition of his professionalism and loyalty, the governments of the owner-states of Odu’a Investment Company Limited, in 1989, appointed Oloye Alabi the first Public Affairs Manager of the conglomerate. After 17 years of dedicated service to the Yoruba economic patrimony, he voluntarily retired from the Odu’a Group in 2006, as the first General Manager, Corporate Affairs.
Oloye Alabi is the Chairman of the Adegoke Adelabu (Penkelemesi) Foundation and the Yusufu Olatunji (Baba lEgba) Foundation.

He is a Trustee of the Adekunle Fajuyi Foundation, D. O. Fagunwa Foundation, Duro Ladipo Foundation, among others. In 2013, he was conferred with an honorary Doctor of Letters degree by Achievers University, Owo, Ondo State.
Oloye Alabi is married and blessed with adorable children and grandchildren.