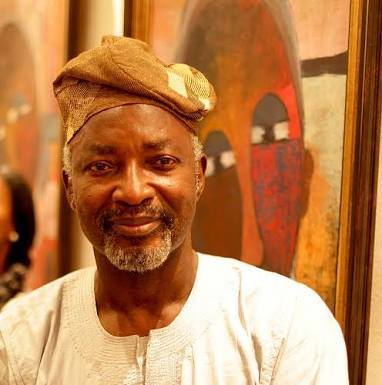 Muraina Oyelami is a prolific painter and is described by many as a poetic painter with a romantic touch. Oyelami’s works are a representation of his experiences, stories, folktales and landscapes.

76 year old Oyelami is known by many as a master painter and by others as a great performing artist. He began his career 52 years ago, precisely in 1964. Muraina is one of the original products of the famous Osogbo Art Movement.
Described as a poetic painter with a romantic approach, his works reflect composition and meaning. His varied and enormous list of credits include Studio Museum in Harlem, New York, Staatlichen Kunsthalle, Berlin, Museum of African Art, Smithsonian Institute, Washington DC., and Institute of Contemporary Arts, London to mention a few.

Muraina Oyelami was born in Iragbiji in 1940. He began his career as an artist at the age of 24 in 1964 as one of the original products of the famous Osogbo Art School initiated by Professor Ulli Beier and his wife Georgina Beier.
He studied Technical Theatre specialising in Theatre Design at the Obafemi Awolowo University, Ile Ife where he later taught traditional music from 1975 to 1987. Osogbo is an idyllic town in Western Nigeria. This was the site of an art experiment.

The idea was to bring together young, creative people without formal art training and encourage them to paint from the heart.
The experiment was such a success that today Osogbo has become the centre of an art movement in Nigeria, with an ever-growing group of artists.

Oyelemi was one of the first set of Osogbo artists. Before then Oyelami was also a founding member of the late Duro Ladipo Theatre Company as an actor and musician. He toured with the group to the Berlin Festival of Art in 1964 and the first Commonwealth Arts Festival in the United Kingdom in 1965.

He took on the ideas of the experiment – to create art from the inner mind without the restraint of formal training – and became the most visible and most successful of the Osogbo artists. Of his lack of formal training he says, ‘If we had gone to a university art school, we would not have been able to develop the inner eye so early.

Too many things would have been imposed upon us and it might have taken us years to free ourselves from that education.’ He also composed and directed the music for Wole Soyinka’s famous ‘Death and the King’s Horseman’ at the Royal Exchange Theatre, Manchester, England.

Muraina Oyelami has exhibited his works and performed traditional and fusion music throughout Europe, Asia, Africa, Australia and USA. His varied and enormous list of credits include Guest of the Chopin Academy of Music in Warsaw, Poland, Artist in Residence and Fellow of the National Black Theatre in Harlem, New York and Guest Professor in African Studies at the University of Bayreuth, Germany, link Bridge of Faculty of Health Sciences, Obafemi Awolowo University (O.A.U.) Ile-Ife in 1975 and on Wema Bank Plc. (Iragbiji Branch) in 1983.

On February 14th, 1993, he was installed as Eesa of Iragbiji.
Muraino Oyelami is today the chief of his village -a few miles outside Osogbo. He still paints and has exhibited widely in Nigeria and in America.