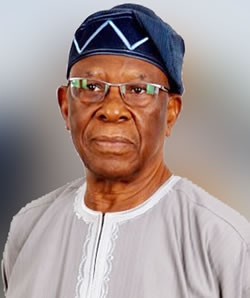 Michael Ade-Ojo, OON was born in Nigeria, 80 years ago, on the 14th of June 1938 to two modest parents. At a very young age, he became a street vendor, and started selling charcoal, food, & firewood to help make ends meet.

He thereafter undertook an 18-month course at the School of Agriculture, Akure after which he had a brief working stint as a laboratory technician in the Ministry of Agriculture, Moore Plantation, Ibadan before proceeding to the University of Nigeria, Nsukka, UNN, in September 1961, where he studied Business Administration and graduated with a Second Class Upper Division in June 1965.

After his graduation, he joined the work force at CFAO motors; a French distribution company. This same company had paid the tuition for his last two years in the university.

In 1966, while still working as a salesman for CFAO motors, he successfully sold 20 trucks to the Electricity Corporation of Nigeria, but to his dismay, his manager took credit for the sale, which led to a protest by Michael, followed with him losing his job by the end of the year.

After his ousting at CFAO motors, he moved on, and got a job at British Petroleum (BP). Within three months of his employment, he increased the sales of his local division by 25%. But just as he was unfortunate with his previous employment, his new boss took credit for the outstanding growth, and this left him aggrieved and lost in thoughts.

While in Lagos, Nigeria, during his annual British Petroleum (BP) holiday, he decided to take a daring step to approach the RT Brisco Group; an importer and distributor of trucking and automobile equipment. He made them an offer to sell their equipments for a commission on every successful sale.

After careful consideration, the RT Brisco Group decided to give him a trial. In just four months after he sealed the deal with Brisco, he sold about 40 cars. The commissions earned from the total sales, were overwhelmingly higher than his yearly salary at BP. This motivated him to quit his job, and pursue his dreams.

In 1971, he started the company, Elizade Independent Agencies (EIA), with his wife, Elizabeth Wuraola Ojo. The name Elizade, was derived from both his wife’s name, Elizabeth, and his name, Ade. His company focused on the distribution of automobiles in Nigeria, especially Japanese cars.

Today, his conglomerate consists of Toyota Nigeria Limited, RT Briscoe Nigeria, Elizade Auto Land, Classic Motors Limited, Crow Motors Nigeria Limited, Elizade University, Okin Travels Limited, and a host of other investments. He’s also on the board of directors of several Nigerian banks and other companies such as Ecobank, First City Monument Bank, and SMT Nigeria Limited (the official distributors of Mack trucks, Volvo trucks, & Volvo Construction Equipments).
His love for the economic development in Nigeria has led him to build a vehicle assembly plant which was completed in November 2015 for assembly of Toyota and JAC vehicles.

He has invested about $50m in the plant which is capable of assembling 40,000 units of cars, light trucks and mini buses per year. His group of companies contributed about N200billion to the economy of Nigeria from 2005 to 2015 in terms of Customs duties, VAT, company income tax, education tax excluding the personal income taxes of the management and staff.

Ade Ojo is gradually transforming his native town Ilara-Mokin from a village to an economically vibrant town through his various community development projects. These include the construction of 8.5km Ilara-Mokin township roads with side shoulders and drains at a cost of N205 million in 2005 as well as his financing of the Shield Micro Finance Bank Limited.

He has also assisted a substantial number of indigenes through economic and financial empowerment. Little wonder he was awarded the prestigious chieftaincy title of “Aare Ataiyese of Ilara-Mokin” by his people in 1992 and in 2007 was awarded the Asiwaju of Imesi-Ile, the home town of his late wife, Chief (Mrs) Elizabeth Wuraola Ojo. In January 2010 he was conferred with yet another prestigious chieftaincy title of Baaloro of the Source, Ile-Ife by the late Ooni of Ife, Oba Okunade Sijuade.

A disciplinarian and stickler for details, Ade Ojo never takes ‘No’ for an answer. He insists that every problem has a solution and holds tenaciously to his unchanging principles of hard work, honesty and integrity, which have seen him through turbulent times. A patriot and a lover of culture, Ade Ojo has continued to demonstrate his love for his country and culture at all times. His passion for the sustenance of Yoruba culture motivated him to establish Oodua Creations Limited, a garment manufacturing outfit which specializes in traditional and corporate wears with the use of Nigerian Fabrics. This has won international awards at various times. He is also an ardent lover and supporter of education.
Apart from donations to various educational projects, he set up the Ade-Ojo Scholarship Scheme in 1991 from which more than one hundred and twenty students have benefited. In realization of the dearth of skilled technicians and artisans in the country, he and his late wife decided to arrest the situation by proposing to establish Elizade Polytechnic, which was conceived as a skill acquisition centre where technical and entrepreneurial skills could be imparted to youths from all parts of Nigeria and beyond.

DAWN Commission has chosen to celebrate you Chief Michael Ade-Ojo, as you officially join the league of Octogenarians.