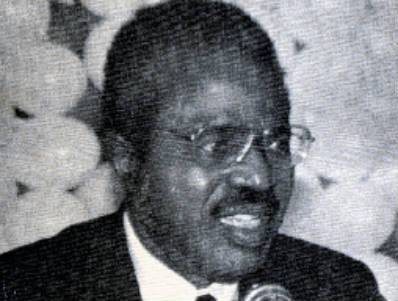 Akinola Aguda (1923–2001) was a Nigerian jurist and a former Chief Justice of Botswana. Prior to becoming Chief Justice, he was a lawyer and a Judge in the High Court of Nigeria under the old Western Region of Nigeria.
He was also the First Indigenous African to Head the position of Chief Justice in Botswana.

Judge Aguda was born in Akure to the family of Elijah Aguda and Deborah Fasu, a prominent Anglican couple in Akure. He studied at St David\\\’s Primary School, Akure, for primary education and left for the Government College, Ibadan for secondary education. Originally, he wanted to be a doctor or an engineer but his mind was not quite into Chemistry, a crucial subject necessary to pass medical school. He left medical school after the first year and tried teaching but on the advice of Obafemi Awolowo, he changed his mind and decided to enrol in a Law school. He studied Law at the University of London, and was called to the bar in 1952.

By dint of hard work in his private studies and one year residence at the LSE, he sat for and passed the LL.M degree examination in 1959. During his one year study at the London School of Oriental and African Studies he submitted and successfully defended his Doctoral thesis on “Mens-Rea in Nigerian Law”. He was, in between, admitted to the Honourable Society of Lincolns Inn in 1949 where he read for and passed the Bar Final Examination in 1951.

Throughout his legal career, he was known as a Cerebral Jurist and Lawyer, who embraced radicalism especially during period of military rule in Nigeria. It is believed this may have resulted in his exclusion as a member of the Supreme Court of Nigeria.

After completing his studies, he entered private practice in the chambers of the distinguished Nigerian lawyer, Ayo Rosiji but later transferred to the legal department of the Western Region of Nigeria, and became the Pupil Crown Counsel. Soon thereafter, he was made Crown Counsel in 1955 and in 1968, he became the acting solicitor general of the Western region. On February 3, 1972, he was appointed the first African Chief Justice of Botswana, concurrently; he was also a judge of the Court of Appeal of Swaziland, Botswana and Lesotho. After, leaving the Supreme Court in 1975, he returned to Nigeria and continued his judicial career as Chief Judge of Ondo State.

He was president of the Nigerian Society of Criminology from 1969 to 1979, vice president, African Institute of Private International Law from 1972, vice president, Nigerian National Society for Rehabilitation of the Disabled since 1979. He is the leader and lay-head of St Thomas Church, Akure since 1978 and first chancellor of the Anglican Diocese of Akure since 1983. He is also a member of numerous philanthropic societies.

In 1976, he was a leading member of the committee that recommended Abuja as the capital of Nigeria. He retired from civil service in 1978 and became the director of the newly created Nigerian Institute of Advanced Legal Studies at the University of Lagos. In 1968, in the case of Agbaje vs. the Western Government of Nigeria, he wrote a comment that is still relevant in today\\\’s Nigerian judicial system.

“In a democracy like ours, even in spite of the national emergency in which we have been for the past three years, I hold the view that it is, to say the least, high-handed for the police to hold a citizen of this country in custody in various places for over ten days without showing him the authority under which he is being held or at least informing him verbally of such authority. ”

He also sought for removal of economic barriers in the criminal justice system, concurrently with a speedy trial and to put omnipotent leaders under the law not above it.

Dr Akinola Aguda has to his credit seventeen published books that have in no small way shaped the course of legal development in Nigeria. He has delivered no less than forty five public lectures and conference papers at conferences, most of which have now been published. He has contributed chapters to many published works in addition to his innumerable articles in learned journals.

His books have been categorized into the following heads:

He has, however, used the opportunity of his writings as indeed all legal authors of repute do, as an avenue to criticize a number of decisions and a good deal of our statutes.