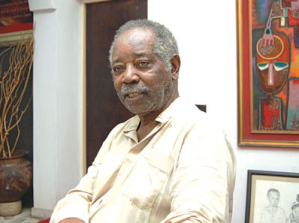 Jacob Festus Adeniyi Ajayi, commonly known as J. F. Ade Ajayi, was born in Ikole-Ekiti on 26 May 1929; his father was a personal assistant of the Oba of Ikole during the era of Native Authorities.

He started education at St Paul’s School, Ikole, at the age of five. He then proceeded to Ekiti Central School (now Christ’s School Ado Ekiti) for preparation as a pupil teacher. However, after hearing from a friend about Igbobi College in Lagos, he decided to try his luck and applied.

Thereafter, he gained admission into the college, equipped with a scholarship from the Ikole Ekiti Native authority. After completing his studies at Igbobi, he gained admission to the University of Ibadan, where he was to pick between History, Latin or English for his degree. He chose History.

In 1952, he travelled abroad and studied at Leicester University, under the tutelage of Professor Jack Simmons, a brilliant Oxford-trained historian. In 1956 he married Christie Ade Ajayi (née Martins). After graduation, he was a research fellow at the Institute of Historical Research, London from 1957–1958. He later returned to Nigeria and joined the history department of the University of Ibadan.

In 1993, Ajayi was awarded the “Distinguished Africanist Award” by the African Studies Association. In 1994, he became an Honorary Fellow of SOAS. Ade Ajayi favors the use of historical continuity more often than focusing on events only as powerful agents of change that can move the basic foundations of cultures and mould them into new ones. Instead, he sees many critical events in African life, sometimes as weathering episodes which still leave some parts of the core of Africans intact.

He also employs a less passionate style in his works, especially in his early writings, using subtle criticism of controversial issues of the times. As an early writer of Nigerian and African history, though not a pioneer like Kenneth
Dike, he brought considerable respect to the Ibadan School and African research.

He is known for the arduous research and rigorous effort he puts into his work. By extensive use of oral sources in some of his works such as pre-twentieth century Yoruba history, he was able to weigh, balance and analyze each and all of his
sources, uncovering a pathway towards facts in the period which was scarce in written and non-prejudiced forms.

Ajayi also tries to be dispassionate in his writings, especially when writing about controversial or passionate subjects in African history. In an article on the history of Yoruba writing, he was able to appraise critically and with resignation, Samuel Ajayi Crowther, a hero to Ade Ajayi. His style of rigorous research presented new pathways in African historiography and augmented awareness among scholarly circles outside the continent to African methodologies and perceptions. By weighing sources both written and oral, he was able to find new issues of interest that formed the basis of British colonisation of Lagos, balancing official British documentation of the event with additional material. Another theme in many of his works is nationalism.

Ajayi sees religious currents as setting the foundation for modern Nigerian nationalism. The Fulani Jihad of the early
twentieth century set a basis for a common front, while Christian missionaries such as CMS, had laid the foundation for a movement towards unity in the south. The missionaries also established schools that created a new educated class who later broke with the Europeans and fought for a new social and political order.

However, the new order embraced European contemporary social, political and economic structures as ideals of the new society. Ajayi, however, with gradation has expressed a much more critical stance on the need to embrace Pan-Africanism as the foundation of nationalism.