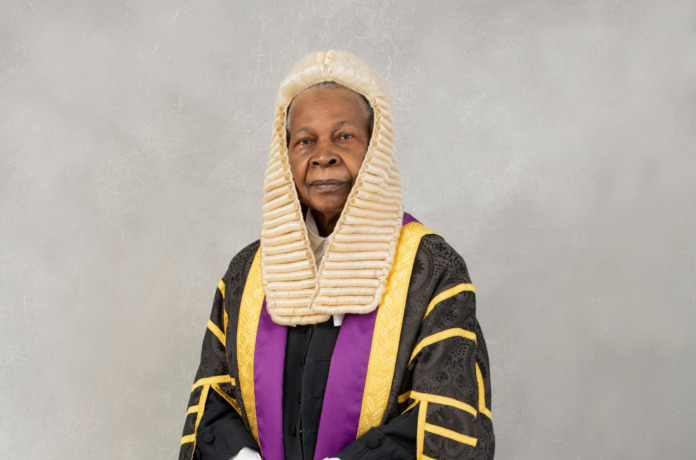 A woman of many firsts in the Legal Profession

Hairat Aderinsola Balogun was born on October 10, 1941, in Lagos, Nigeria, to the family of Alatishe of the Badewa Family of Ososa, Ogun State. She is the first child of her mother, who was the fourth wife to her father who had nine wives. Precisely ten days after her birth, she was placed in the care of her grandmother who raised her in Ijebu-Ode, Ogun State. She received her early education in Ijebu-Ode; Saint Saviour’s Primary School, Ijebu-Ode, and Christ Church Porogun Primary School, Ijebu Ode where she earned her First School Leaving Certificate. At the age of twelve, she travelled to the United Kingdom for her Secondary School Education, attending Mount School London from 1955–1960.

During a visit to Nigeria during school break, Hairat Balogun accompanied a family friend, Mr. Dayo Sonuga to the traffic court in Yaba, Lagos, and was later inspired to pursue a profession in law with the desire to serve as an aid to the people of Nigeria. She proceeded to study law at Gibson and Weldon, as well as the Inns of Court School of Law—Lincoln’s Inn. She was called to the English Bar on February 5, 1963, at the Lincoln’s Inn. She later returned to Nigeria and enrolled in the Nigerian Law School Lagos from April to July 1963, gaining admission to the Nigerian Bar on July 13, 1963.

After her call to the Nigerian Bar, she worked in the Chamber of Ogunbanjo & Co. for four years. In 1967, she established her own practice—Libra Law Office, with practice in the areas of commercial law, arbitration and family law. From 1971 to 1972 she was appointed as an Assistant Director, at the Legal Aid Council. She also served as the Secretary of the Sixth Commonwealth Law Conference from November 1978–August 1980. In August of 1980, in a keenly contested Nigerian Bar Association (NBA) national general election, Hairat was elected as the General Secretary of the Nigerian Bar Association, making her the first female to be elected to this position, a position she held for three years.

She later became the first Nigerian female to become a member of the Council of the International Bar Association, serving from 1981–1983, 1992–1994, and 1994–1996. She volunteered and taught pro bono at the Nigerian Law School from January 1979 to July 1984, teaching Law Office Management and Professional Ethics, and established an annual prize award in the Nigerian Law School for Special/Handicapped Students who performed exceptionally at the final exams. She further oversaw the compilation and publication of Laws of Lagos State for the period of 1975–1981 and undertook the translation of two edicts from the English language to the Yoruba language: The Environmental Sanitation Edict, 1984 and the Illegal Markets (Prohibition) Edict, 1984. She saw to the creation of two new Divisions; Commercial Law and Law Reform in the Ministry of Justice and ensured the inauguration of prison visits and the holding of sessions by the State Advisory Council on the prerogative of mercy in the prison yards at Apapa, Kirikiri.

Between 1984 and 1986, she recommended ten legal practitioners for appointment as High Court Judges. She initiated the Weekly Consultation/Conference session for Counsel in the Civil Litigation and Director of Public Prosecution Divisions. She also co-founded the Continuing Legal Education Association of Nigeria (CLEAN), and was a Council member until it was passed over to the Nigerian Bar Association.

She served as a member of the Governing Council of Lagos State University Council (LASU) 1987–1990, and a member of the Management Board, Center for Cultural Services, University of Lagos, 1987–1990. The former military president, General Ibrahim Babngida (rtd) appointed her a member of the Transition to Civil Rule Tribunal in 1987 in a bid to return the nation to civilian rule from 1992. She also served as a Legal Assessor for the Institute of Chartered Accountants of Nigeria (ICAN) upon her appointment by the Chief Justice of Nigeria between 1993 and 2001. Her duties included rendering advice at the sittings of the ICAN Disciplinary Committee. She voluntarily resigned to spend more time on other national assignments.

In September 2000, Hairat was nominated by President Obasanjo and approved by the Senate as a Member of the Independent Anti-Corruption Commission, where she served from February 2001 to April 2002, when she resigned voluntarily to return to legal practice. The Rotary International (District 9110 Nigeria) later honored her with an award for the most Distinguished Vocational Service for High Ethics in May 2002.

Hairat served as a United Nations International Observer at the Lockerbie Trial from 2000 to 2001 where she observed the day-to-day proceedings of the Court. That same year, she served as Honorable Member of the Independent Corrupt Practices and other Related Offenses Committee. Hairat Balogun would later become the first female member and the first female President of the Rotary Club of Lagos which she served meritoriously from 2012 to 2013.

She is a Life Member of the International Federation of Women Lawyers (FIDA) for her dedication to breaking boundaries and encouraging women to aspire to be whatever they want to be in life. In recognition of her service and steadfast dedication to the legal profession and the nation as a whole, Hairat Balogun was conferred with the highest national honor in Nigeria—Officer of the Order of the Niger (OON) on February 14, 2008.

She is the founder and Senior Partner of Libra Law Office, a medium-sized law firm in the heart of Lagos. In 2009, she authored ‘Women in Law’, a book that examined the role of gender difference in the legal profession which was an attempt to chronicle the efforts of the first women doing remarkable work in the legal profession and beyond. In a bid to chronicle and document all her achievements and set all records straight, she published ‘To Serve in Truth & Justice: Law Memoirs’ in 2010, which was published by Habiba Balogun Consulting Firm on behalf of Libra Law Office. In ‘To Serve in Truth & Justice: Law Memoirs’ (pg 151), she remarks, “it is often asked how do you want to be remembered? My answer to that question is “she did her best for the legal profession” because that’s all I strive for each and every day knowing that I only have today to do what must be done.’’

Mama Hairat is a disciplinarian; passionate about maintaining the ethos of the profession through mentorship. It is not unusual to see her correcting younger lawyers on their courtroom mannerisms, language and dressing.

DAWN Commission congratulates Mama on her many areas of achievements in the legal profession and wishes her a good health as she continues to serve as a worthy example of excellent womanhood and an OMOLUWABI.