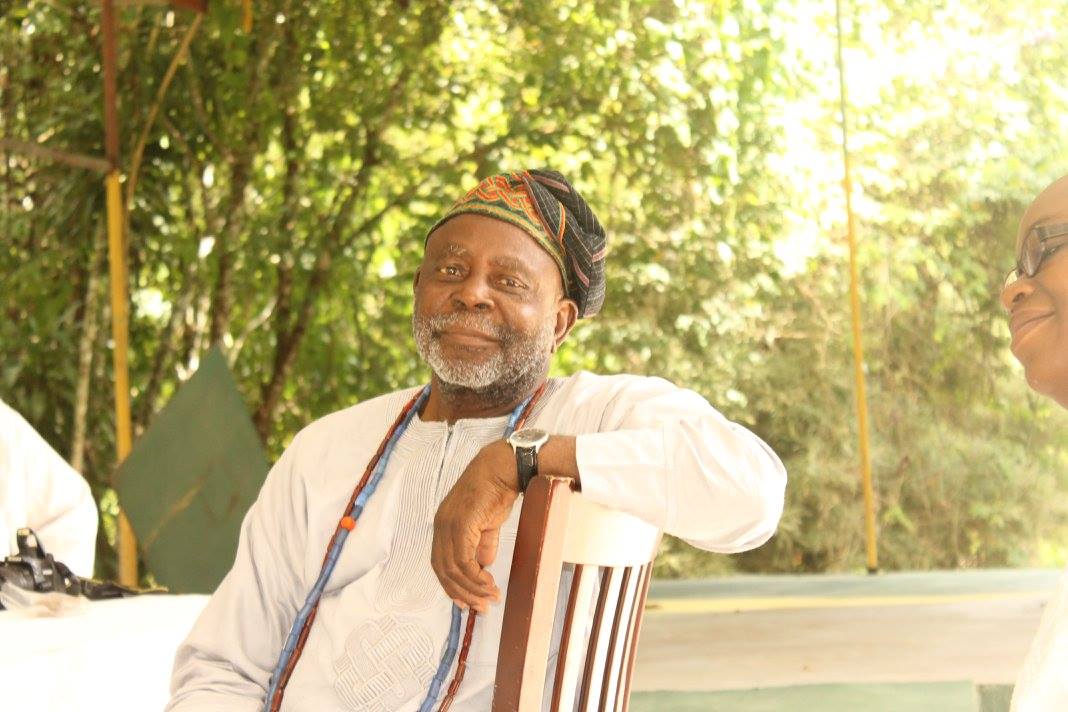 High Chief Araba Ifayemi Elebuibon, widely known as Araba Awo of Oshogbo, is a titan of the African culture, and media fixture of the early 70’s.

He is a highly respected cultural icon at home and abroad, a recording and performing artiste, and a playwright of several Yoruba poetic genre known as Ewi.

Chief Ifayemi was born in the defunct Western Region of Nigeria, into a family acclaimed to be one of the authorities on Yoruba traditional institutions. He is a direct descendant of Olutimehin, and one of the Co-founders of the City of Oshogbo. He had his formal education through correspondence and from friends, as his parent wanted him to be grounded in traditional teachings.

Chief Ifayemi is regarded as one the most distinguished traditionalists that ever came out of Africa. He is an international scholar in residence at San Francisco State University, where he lectures on African Traditional Religion and Culture, and has trained a lot of students and initiated many into the tradition.

He is the founder of Ancient Philosophy International in Osogbo, a centre dedicated to teaching African Traditional Religion and Performing Arts. He was appointed the Vice Chairman of Board of Traditional Medicine, Osun State, and he is presently the President of International Congress of Orisa Tradition and culture, Nigeria Chapter. He is an Associate staff member of the Department of African Language and Literature, at Obafemi Awolowo University, Ile-Ife Nigeria.

Chief Ifayemi is of the view that the post-modern African states have lost the essence of their being when they threw away their traditions for western civilization. To him, the place of Ifa in African society is as significant today as it was in the past. He is of the believe that the president, the governor and even the local council chairmen could achieve better administration if they consult Ifa Oracle from time to time before taking decisions.

Chief Ifayemi has published several scholarly papers on various aspects of Yoruba Traditional Religion and Culture, History, Medicine and Science. Notable among these books are: The Adventures of Obatala I & II, Apetebi Wife of Orunmila, Healing Power of Sacrifice, Poetry Voice of Ifa (Iyere Ifa), Irin Ajo Eda (Poem), the Custodian of Destiny, The Invisible Powers of the Metaphysical World: A Peep Into the World of Witches, Iyere Ifa (Tonal Poetry, the Voice of Ifa): an Exposition of Yoruba Divinational Chants, Irinajo Eda, Ogota Ewi Ogota Ajodun orikadun, New Series of Works, Soul Journeys of a Priest in the Wonderland, Water Spirit of Yorubaland, Healing Power of the Prayer, Iku the Fearful Spirit etc.

Chief Ifayemi has gone on lecture tour in United States at Wajumba Cultural Institution and national Black theatre in Harlem. In 1973, he travelled with Duro Ladipo to Paris to perform at festival mudial du theatre; went with him to Brazil for the performance of Obakoso in 1975; three months after Araba attended Mel Howord Production of Obakoso and also travelled to many parts of the USA. After the Festac”77, Araba travelled to Brazil on invitation of Opo Axe Afonja in Balia Sauador in 1977.

In 1983, Araba wrote thirteen episodes presentations of drama to BCOS Ile Akede, the drama of mythology and divinities, orisas and their mission on the planet. Also in 1989, Chief Araba presented a new recording of Ewi Baba Oniwogbe Poetry that mirrored the ills of the society; he and his Ancient Philosophy International Troupe represented Oyo State Government at the festival held at Bauchi State. The troupe performed Yoruba traditional music and was awarded. He also lectured and toured the USA, while he attended the Alfia International Conference on Trace in Marrakesh, Morocco. He has travelled to many parts of the world at the invitation of organizations, institutions, colleges, Universities and local Government

Chief Ifayemi has garnered several awards and recognitions, which include the lifetime achievement chieftaincy, recently conferred on him as the Araba of Osogbo a title that elevated him to a venerated position in the priesthood hierarchy. He has also been honored with a doctorate degree of the Brandice University USA, Associate staff at Institute of Cultural, Vice Chairman of Board of Traditional Medicine, Osun State, Merit Award, Justice of Peace, Government of Osun State, Merit Award Osogbo Progressive Union, Silver Trophy Government of Oyo State by Sasa Eniyan, Ore Sanya; An honourary decorated degree of traditional religion upon the Recommendation (USA 27-7-1993). He is also the current president of International Congress of Orisa tradition and culture, Nigeria Chapter.

He maintains a botanical and mini-museum at his House of Culture that has become a must stop for visitors to Osogbo for the city annual Osun Festival.

Elebuibon: Ifa Has Ordained That My Children Take After Me… Like I Took After My Own Father