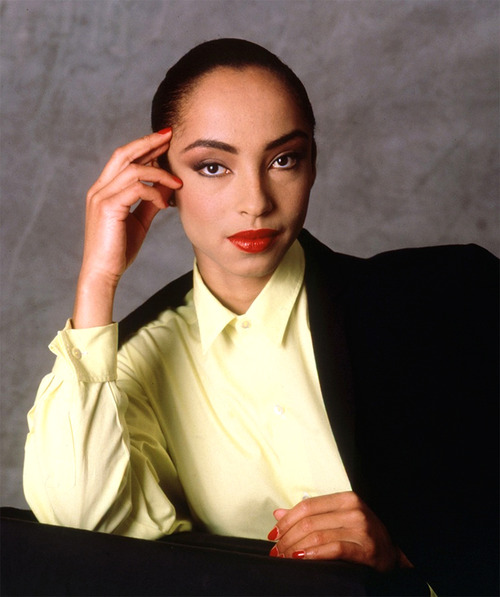 * Agelesss Beauty and Beautiful Music Maker
* Born 57 Years Ago, precisely on the 16th of January 1959

Helen Folasade Adu is a Nigerian-born English pop star with background rooted in Southwest Nigeria. She gained worldwide fame as the lead vocalist of the English band with members Paul S. Denman, Andrew Hale, and Stuart Matthewman (Sade) in the early 1980s.

Her father was a University Teacher of Economics from Nigerian; her mother Anne was an English nurse. The couple met in London while he was studying at the LSE and moved to Nigeria shortly after getting married. When their daughter was born, nobody locally was prepared to call her by her English name, and a shortened version of Folasade stuck.

Sade was born on January 16, 1959 in the ancient city of Ibadan. Her parents separated when she was four years old, however, her mother returned to England, taking her and her elder brother Banji back to England, where they initially lived with their grandparents just outside Colchester, Essex. Sade moved to Holland-on-Sea, Essex, to live with her mother at age 11. She completing her education at Clacton County High School at age 18 and then moved to London where she studied fashion design at Saint Martin’s School of Art.

Sade loved American soul music which she often listened to, particularly the wave led in the 1970’s by artists such as Curtis Mayfield, Donny Hathaway, and Bill Withers. As a teenager, she saw the Jackson 5 at the Rainbow theatre in Finsbury Park, where she worked behind the bar at weekends.

After completing a three-year course work in fashion design, and later modeling briefly, Sade began backup singing with British band known as Pride. During this, she formed a songwriting partnership with Pride’s guitarist/saxophonist Stuart Matthewman and together, backed by Pride’s rhythm section, they began doing their own sets at Pride gigs.

Although, music wasn’t her first choice as a career. She Somewhat found that while the singing made her nervous, she enjoyed writing songs. Two years later she had overcome her stage fright and was regularly singing back up.
Sade served a long apprenticeship on the road with Pride. For three years, from 1981, she and the other seven members of the band toured the UK, often with her driving. Pride’s shows featured a segment in which Sade fronted a quartet that played quieter, jazzier numbers.

One of these, a song called Smooth Operator, which Sade had co-written herself, attracted the attention of record company talent scouts. Soon, everybody wanted to sign her, but not the rest of Pride. Obstinately loyal to her friends in the group, she refused to leave them. 18 months later she relented and signed to Epic records – on condition that she took with her the three band mates who still comprise the entity known as Sade: saxophonist Stuart Matthewman, keyboard player Andrew Hale, and bassist Paul Denman.

Sade’s first single, Your Love Is King, became a top 10 British hit in February 1984, and with that her life, and that of the band, changed tremendously. The unstressed, understated elegance of the music in conjunction with her look – unspecifically exotic and effortlessly sophisticated – launched Sade as the female face of the style decade. Magazines queued to put her on the cover. “It wasn’t marketing,” she says, wearily. “It was just me. And I wasn’t trying to promote an image.”

At the time of her first album, Diamond Life, her actual life was anything but diamond-like. Sade was living in a converted fire station in Finsbury Park with her then boyfriend, the style journalist Robert Elms. There was no heating, which meant that she had to get dressed in bed. The loo, which used to ice over in winter, was on the fire escape.

The bath was in the kitchen. For the remainder of the 1980’s, as the first three albums sold by the million around the world, Sade toured more or less constantly.
In late 1985, the band released their second album, Promise, which peaked at number one in both the UK and the US and became the band’s first album to reach number one on the US Billboard 200. The album topped the chart in 1986 and spent two weeks at the peak position. Eventually, the album went on to sell four million copies in the region and was certified four times platinum by the Recording Industry Association of America (RIAA).

The album spawned two singles “Never as Good as the First Time” and “The Sweetest Taboo,” the latter of which was released as the album’s lead single and stayed on the US Hot 100 for six months.
“The Sweetest Taboo” peaked at number five on the US Billboard Hot 100, number one on the US adult Contemporary chart, and number-three on the US Hot R&B/Hip-Hop Singles & Tracks. Sade was so popular that some radio stations reinstated the ’70s practice of playing album tracks, adding “Is It a Crime” and “Tar Baby” to their playlists. The following year in 1986 the band won a Grammy Award for Best New Artist.

In 1986, Sade made her acting debut in Absolute Beginners, a film adapted from the Colin MacInnes book of the same name about life in late-1950s London. Sade played the role of Athene Duncannon and lent her vocals to the film’s accompanying soundtrack. The film was screened out of competition at the 1986 Cannes Film Festival and grossed £1.8 million in the UK.

Sade’s third album, Stronger Than Pride, was released on 3 May 1988, and like Sade’s previous album Stronger Than Pride became a commercial success and certified three times platinum in the US.
The album was popularized by four singles, most notably the album’s second single “Paradise” which peaked at number 16 on the US Billboard Hot 100 and peaked at number one on the US Billboard Hot R&B/Hip-Hop Songs, becoming the band’s first single to do so.

Love Deluxe was released as the band’s fourth studio album on 26 October 1992. The album peaked at number three on the US Billboard 200 and sold 3.4 million copies in the United States. The album was later certified four times platinum by the RIAA for shipments of four million copies.

The album was also commercially successful elsewhere reaching number-one in France, and reaching the top ten in New Zealand, Sweden, Switzerland and the UK. The album went on to be certified gold in the United Kingdom. In November 1994, the group released their first compilation album, The Best of Sade.

The album was another top ten hit in both the United Kingdom and the United States, certified platinum and four times platinum, respectively. The compilation album included material from Sade’s previous albums as well as a cover version of “Please Send Me Someone to Love” (1950) originally by Percy Mayfield.

(RIAA), having sold 3.9 million copies in the United States by February 2010. On 27 February 2002, the album earned Sade the Grammy Award for Best Pop Vocal Album and the lead single “By Your Side” was nominated for the 2002 Grammy Award for Best Female Pop Vocal Performance. Although the single lost out to Nelly Furtado’s “I’m Like a Bird”, it has been listed as the 48th greatest love song of all time by VH1.

To promote the album Sade and the band embarked on their fifth concert tour entitled Lovers Rock Tour. Following the tour, the band released their first live album, Lovers Live on 5 February 2002 by Epic Records. Lovers Live reached number-ten on the US Billboard 200 and number 51 on the UK Albums Chart, the band’s first album to miss the top twenty in the UK.

The album was certified gold by the RIAA on 7 March 2002, having sold US sales of 562,000 copies, while the DVD was certified platinum on 30 January 2003 for shipping 100,000 copies.
Following the release of Lovers Rock, Sade took a ten-year hiatus, during which she raised her daughter and moved to the Caribbean. During this time, she made a rare public appearance for an award ceremony that took place in 2002 to accept an Order of the British Empire (OBE) at Buckingham Palace for services to music.

In 2002, she appeared on the Red-Hot Organization album, Red Hot + Riot, a compilation CD in tribute to the music of fellow Nigerian musician, Fela Kuti. She recorded a remix of her hit single, “By Your Side” for the album and was billed as a co-producer.

The band’s sixth studio album, Soldier of Love, was released worldwide on 8 February 2010 and was the most recent album in ten years to contain new material. Upon release the album received positive reviews and became a success. The album debuted atop the Billboard 200 in the United States with first-week sales of 502,000 copies.
Soldier of Love became the band’s first album to debut at number-one and the band’s second album to peak at number-one on the chart. The album also had the best sales week by a group since Australian band AC/DC released their album, Black Ice and entered the Billboard 200 at number-one in November 2008. Consequently, the band became the act with the longest hiatus between number-one albums, as the band’s Promise (1985) and Soldier of Love were separated by 24 years, 10 months and 2 weeks.

The first single and title track, “Soldier of Love”, premiered on US radio on 8 December 2009 and was released digitally on 11 January 2010. Subsequent singles, “Babyfather” and “The Moon and the Sky”, were played by US urban adult contemporary radio on 13 April and 24 August 2010, respectively.

At the 53rd Annual Grammy Awards in 2011, the title track won Best R&B Performance by a Duo or Group with Vocals, while the song, “Baby father”, was nominated for Best Pop Performance by a Duo or Group with Vocals.
In April 2011, the band began their Sade Live tour (also known as the “Once in a Lifetime Tour” or the “Soldier of Love Tour”). The band toured Europe, the Americas, Australia, Asia to promote the band’s sixth studio album and their second compilation album, The Ultimate Collection (2011). This trek marked the band’s first tour in nearly a decade and ranked 27th in Pollstar’s “Top 50 Worldwide Tour (Mid-Year)”, earning over 20 million dollars.

At the conclusion of 2011, the tour placed tenth on Billboard’s annual, “Top 25 Tours”, earning over $50 million with 59 shows.
Sade’s work has influenced numerous musical artists. Rapper Rakim of Eric B. & Rakim stated he grew up listening to Sade’s soul music and was influenced by her voice and style. Sade’s work has also been recognized by many musical artists such as Rapper Missy Elliott, Beyonce, Kelly Rowland, Kanye West, Rick Ross etc.

Intrusive media interest in her private life has inspired a continuing reluctance on her part to participate in the promotional game. Having been travestied in print on many occasions, Sade rarely gives interviews. For most of the past 20 years, Sade prioritised her personal life over her professional career, releasing only three studio albums of new material during that period.

Her marriage to the Spanish film director Carlos Scola Pliego in 1989; the birth of her daughter in 1996 and her early 21st century move from North London to rural Gloucestershire, where she now lives with a new partner, have consumed much of her time and attention.