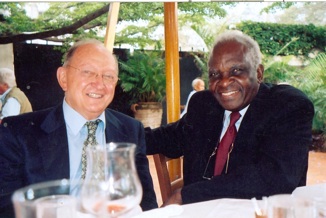 Emeritus Professor Adelola Adeloye, who was born some eighty (80) years ago, precisely on the 18th of July 1935, in the defunct Western Region of Nigeria, is one of the most revered neurosurgeons in Africa.

He had his Training at the Medical School, University College, Ibadan. He was the House Officer, Obstetrics-Gynaecology Adeoyo Hospital, Ibadan in 1960. His Surgical and Neurosurgical education were completed in the United Kingdom, culminating in his fellowship of the Royal College of Surgeons of England. He was appointed the House Surgeon at St. Martin’s Hospital, Bath, England in 1961; and House Physician, Weymouth and District Hospital, Dorset, England 1962. He was the senior house officer of various hospitals in England from 1963-1966.

Prof Adelola completed his MSc thesis in Neurological Surgery and was appointed a Registrar at the National Hospital, Queen’s Square, London, before returning to Nigeria in 1967 as a Senior Registrar (Neurosurgery).

Upon his return to Nigeria, he served with distinction during the Nigerian Civil War, at the Base Hospital, organized by the University College Hospital, Ibadan. Between 1968 and 1972, he was employed as a lecturer and the Senior Lecturer of Neurological Surgery also at the University of Ibadan.

Thereafter, he was appointed a Professor and Chair of Neurological Surgery in 1972. This experience was the foundation for his world renowned expertise in missile wounds and head injury. He obtained a Master of Surgery degree from University of London, 1973, and was later appointed head, department of surgery from 1974 -1977.

Prof. Adeloye’s wealth of experience and expertise was what gave him the edge of being conferred Doctor of Science (honoris causa), International University Foundation, in 1987; before he was later appointed a Foundation Professor, Head Surgery University, Malawi in1991; and also the Acting Principal, College of Medicine in1994.

This renowned Professor was also Head, Neurosurgery unit Al Adan Government Hospital in Kuwait from 1988-1990, until his retirement in 1995. He has also worked in Britain, America, Middle East, the Oceania, Africa and Nigeria where he worked with the foremost Neurosurgeon in Africa, Prof Odeku. He has been recognized across the globe for his long term service and the development of Neuroscience in Africa.

He made significant achievements in his career and has published several books, research notes, and scholarly articles, while contributing to numerous professional journals worldwide in the field of Neurosurgery. Some of his books include; Henry Dallimore: Founder of Christ’s School Ado Ekiti, 1970, E Latunde Odeku: An African Neurosurgeon, 1976, Missile Head Injuries in Nigerian Soldiers, 1976, Nigerian Pioneers of Modern Medicine, 1977, African Pioneers of Modern Medicine: Nigerian Doctors of the Nineteenth Century, 1985 (Concord Press award 1985), Care of the Injured, 1977, Central Nervous System Plasticity and Repair, 1985, Davey’s Companion to Surgery in Africa, second edition, 1987, Neurosurgery in Africa, 1989, Doctor James Africanus Beale Horton: West African Medical Scientist of the 19th Century, 1992, Early Medical Schools in Nigeria, 1998, Practice and Practitioners of Medicine in Nigeria, 2004, Trauma Care, 2004, A Village Genius, 2004, Current Status of Neurological Surgery in Africa, 2006, Inside Occupied Kuwait, 2006 and many others.

Professor Adelola Adeloye is indeed a Good Ambassador of Nigeria.

As you look forward to celebrating your 80th birthday in a couple of days, we earnestly pray that the rest of your years will be the best of your years.God bless you as you clock 80 Emeritus Professor Adelola Adeloye!