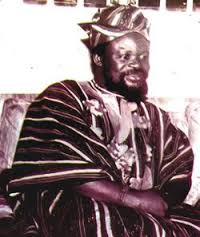 Duro Ladipo was an exceptional Yoruba movie producer, who emerged from the postcolonial Africa.
Duro, through his plays, contributed immensely to the revival of traditional theatre in Nigeria in the mid-twentieth century. His innovative folk operas incorporate ritual poetry and traditional rhythms performed with indigenous instruments based on Yoruba history.
His Writings, solely in the Yoruba language, captivated the symbolic spirit of Yoruba mythologies, which were later adapted to other media such as photography, television and cinema.

Duro Ladipo was born in the defunct Western Region of Nigeria 85 years ago on the 18th of December 1931 and died 47 years late in March 1978. His love for theatre was thought to have been influenced by his grandfather, who was well versed in Yoruba mythology, especially those emanating from Old Oyo, and was known to have worshipped Shango and Oya. At a young age, Duro Ladipo would sneak out of the vicarage to watch Yoruba festivals. This fascination with his culture goaded him into researching and experimenting with theatrical drama and writing.

Duro Ladipo attended the Missionary School, and became a teacher at the Holy Trinity School, Ilesha in the 1950s. He later moved to Kaduna as a teacher at the United Native Anglican School whose drama society he founded and launched with a production of his interpretation of Shakespeare’s As You Like It. He returned to Osogbo still as a teacher with a profound interest in drama productions.

In June 1960, he produced his Easter Cantata at the All Saints Church in Osogbo. The church however hardly appreciated the importance and significance of his work due to his use of traditional rituals and incantations.

He established a theatre group in 1961 but became fully established with the founding of the Mbari Mbayo Club in Osogbo, which was later transformed into a cultural center. Having launched the centre with his first musical play Oba Moro in 1962, Ladipo celebrated Mbari-Mbayo’s first and second anniversaries with the production of Oba Koso and Oba Waja respectively. A story based on the the trilogy of the Oyo empire, Oba Koso is best known, having been performed more than 2,000 times in at least fifteen countries before Ladipo’s death. Oba Koso won the first prize at the 1964 Berlin Theatre Festival and was enthusiastically received in Britain the following year at the Commonwealth Arts Festival.

Also that same year, 1965, Ladipo himself was made a member of the order of the Niger by his country’s Government, in recognition of his impressive contribution of some twenty full-lenght plays and over fifty sketches to the Nigerian theatre. The Oba Koso, Oba Waja and Oba Moro trilogy has become classics of the Nigerian traditional theatre, expounding Yoruba dramatic ideas and rituals to an increasing international audience through world-wide productions and literary criticism.

Duro Oladipo has written quite a number of plays. e.g.; Suru Baba Iwa, Tanimowo, Iku, Moremi etc; some of his plays such as ‘Bode Wasinimi’ were produced for N.T.A Ibadan. His most famous play, Ọba kò so (The king did not hang), a dramatization of the traditional Yoruba story on how Shango became the God of Thunder, received international acclaim at the first Commonwealth Arts Festival in 1965.

In 1977, Ladipo participated in Festac ’77, the Second World Festival of Black and African Arts and Culture, in Lagos, Nigeria. True to his dedication to growth and promotion of the traditional theatre, Ladipo in the later part of his life, took up a research appointment with the Institute of African Studies, University of Ibadan, where he engaged in research work on mythologies; which he did alongside with the running of the Ladipo theatre company, before his death in March, 1978 at the age of 47.