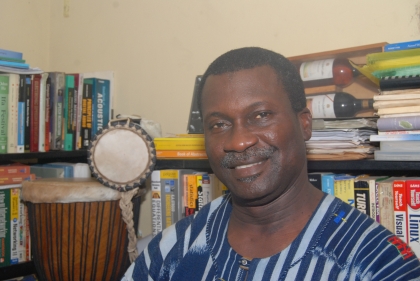 Dr. Tunde Adegbola, a Research Scientist, Consulting Engineer and Cultural Activist with vast experience in information and communication media systems, was born in the defunct Western Region of Nigeria on the 1st of August 1955.

After completing his Secondary School education, he gained admission into the University of Lagos (UNILAG), where he obtained his B.sc Degree in Electrical Engineering. His interest and passion for Engineering led him to the shore of the University of Wales, where he earned his Master’s Degree (M.Sc.) in Computer Science.

Dr. Adegbola has an extensive teaching experience, having taught at the tertiary level from 1982 to present. He taught Telecommunications for many years at the Ogun State Polytechnic (now Moshood Abiola Polytechnic) Abeokuta, Ogun State and has been teaching Artificial Intelligence and Information Networking at the post-graduate level in the Africa Regional Center for Information Science at the University of Ibadan since 1991.

Prior to his present position as the Executive Director of African Languages Technology Initiative (Alt-I), he had contributed to the development of Cellular Automata Transform (CAT) as a Research Fellow at Innovative Computing Group Inc. Ohio, USA, as one of the most advanced compression technologies employed on the global information infrastructure today.
As the Executive Director of African Languages Technology Initiative (Alt-i), Dr. Adegbola leads a team of researchers in adapting human language technologies (HLT’s) for African languages. His research focus is on the tonology of African languages through which he adapts various HLT’s to accommodate the tonality of African languages.
Alt-I, the organisation he leads, (the only private research organisation in HLT in the whole of West Africa) works in Automatic Speech Recognition, Text-To-Speech Synthesis, Machine Translation and other HLT’s for African languages. As a member of the African Network for Localisation, Alt-I developed a Yoruba spelling checker for Open Office in 2008 and an automatic diacritiser for Yoruba texts in 2009. Alt-i is at present working in projects on Igbo-English and Yoruba-English Machine Translation as well as Hausa spelling checker among other projects. Alt-I is a Microsoft partner in the Local Language Program (LLP), working on the localisation of Microsoft Windows and Office Suite and other software for Hausa, Igbo and Yoruba.

In an effort to harness technology to preserve rather than erode indigenous languages, the African Languages Institute, headed by Dr. Tunde Adegbola, developed a keyboard for the Yoruba language that won the IICD Award on Local Content Applications of Information Communication Technologies.

As an outstanding ICT professional, he has made notable contributions in the design and installation of various audio and video production and post-production facilities as well as Radio and TV stations in Nigeria and beyond.

Dr. Adegbola has consulted for various international and multilateral development agencies including the Open Society Initiative for West Africa (OSIWA), Panos Institute West Africa (PIWA), UNICEF, UNDP, International Alert, and West Africa democracy Radio (WADR) as a hub of radio stations in West Africa. He is currently a member of The Digital; the group overseeing the transition to digital broadcasting. He was engaged by UNICEF to evaluate and upgrade the National Radio and Television of Sao Tome.

Dr. Adegbola taught in the capacity of an Associate Lecturer at the Africa Regional Center for Information Science (ARCIS) at the University of Ibadan, he also taught postgraduate courses in Artificial Intelligence and Information Networking.
His present research interests lie in the area of ICT for development, particularly in developing speech technologies for tone African Languages. He also teaches at the University of Lagos as a part-time postgraduate lecturer in the department of Computer Science.

Dr. Adegbola has published several articles and journals; and he has presented at notable international conferences.

Dr. Adegbola is a recipient of multiple awards. He received the British Chevening Scholarship; he is also a recipient of the 2011 Unsung Hero Award of the Change A Life Foundation for “taking African cultures into the knowledge era”. He is a former national athlete, a lover of music and an accomplished musician.

DAWN Commission celebrates you for your contribution through innovative technology for transforming education in Nigeria; economic development and safeguard of indigenous languages within Nigerian and beyond.