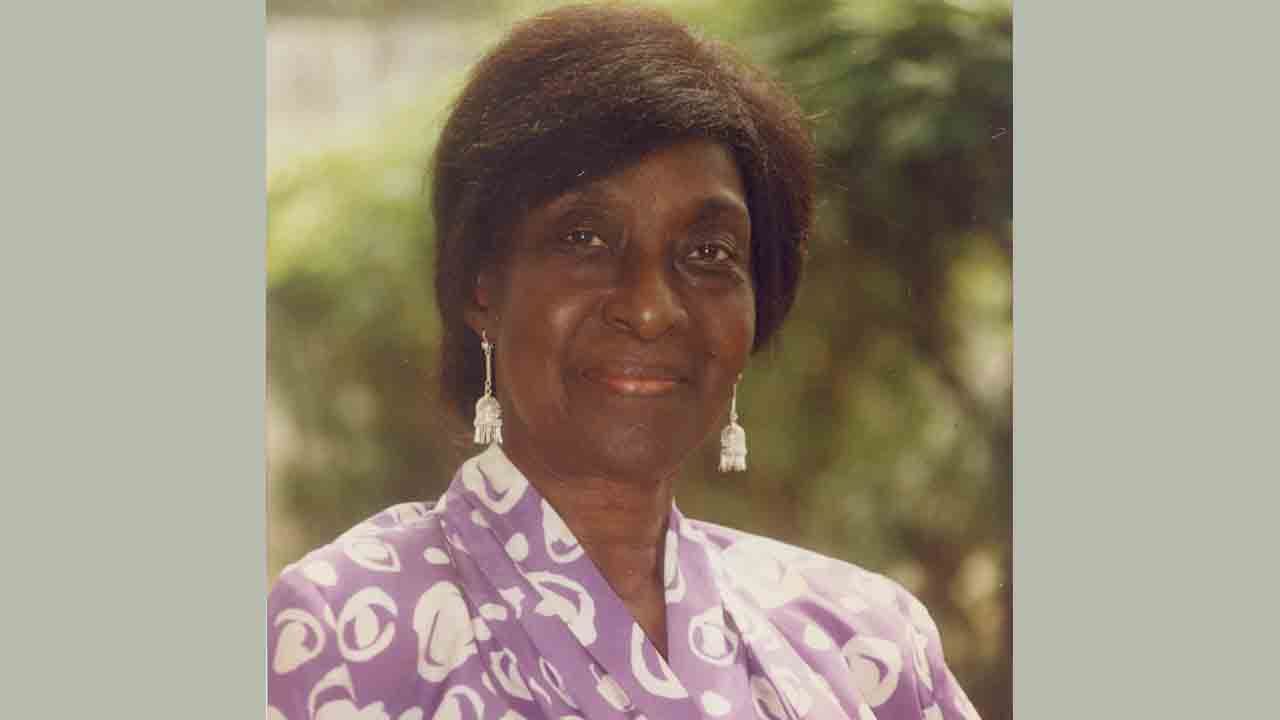 DAWN Commission mourns the passage of Dr. (Mrs) Iphigenia Efunjoke Coker MFR, DSc who died on Monday, 23rd December, 2019 at the age of 95.

In January 1929, at the age of three, she started infant schooling at St. Mary’s Convent School, Broad Street. After St. Mary’s, she attended St. Theresa’s High School for a year, and later St. Agnes’s Teacher Training College. She attended Queen’s College from January 1941 to December 1942.

She taught Mathematics, Geography, and Yoruba at St. Theresa’s High School in Lagos and Ibadan, and at St. Agnes’s in Lagos from 1943 to 1949.

From 1952 to 1956, she attended the National University in Dublin (aka University College Dublin), Ireland, obtaining Bachelor’s degrees in Mathematics and English, and a Master’s degree in English.

Back in Nigeria, she taught at Queen’s School, Ede and Government College, Ibadan, and then took up a posting to Queen’s College, Yaba, Lagos as Vice Principal in 1962. She became the 9th and the 1st African /Nigerian and youngest Principal of Queen’s College since its inception in 1927.  Principal of Queen’s College in 1963 and voluntarily retired from there in 1977 after fourteen years as Principal. She brought dignity, poise, and elegance to the office. Her name became synonymous with the college. She lived for it and remained passionate about it till the very end. She etched Queen’s College on the global map to become the foremost girls’ college in Nigeria.

A Queens College Old Girl (QCOG) herself, she nurtured her students with firm hand but loving care. She inculcated in them the culture of excellence by providing an enabling environment for them to thrive and attain their optimal. Mrs. Coker exuded discipline, diligence and a sense of self-worth: values imbibed by her students which motivated and propelled them to be great achievers in their various fields of endeavours. Her long tenure and motherly care gave the students a sense of belonging and a cord of love and unity which still transcend the barriers of creed, tribe or tongue.

Mrs. Coker was and remains a model of leadership, forming the character and building the competence of thousands of girls who went through her tutelage and an exemplary teacher to teachers. She molded the lives of generations of women who are themselves trendsetters in their various fields and endeared herself to everyone who crossed her path, including those who never met her but knew her through others who did. In her older years, she relaxed a little bit more and had a lot of ‘gist’ for her students who she knew by name, even when they had become grandmothers and teachers in their own right.

The history of education in Nigeria, particularly that of the girl-child is not complete without reference to her. She bestrode the education sector like a colossus. She was a great teacher, mother and mentor who encouraged her students to aspire to great heights.

In appreciation of her contribution to the development of Queens College, a house, EFUNJOKE HOUSE was named after her.

In 1979, she was conferred with the national award of Member of the Order of the Federal Republic (MFR) by General Olusegun Obasanjo for her immense contribution in the field of education as “a dedicated teacher, moral tutor, respected educationist, and a pace-setter in the emancipation of Nigerian womanhood”. In 2016, she clinched the highly exalted 2016 KARIS award. At the awards ceremony, Mike Igbokwe, a Senior Advocate of Nigeria (SAN), said Coker “transformed Queen’s College, Lagos into that premier school for girls in Nigeria, training the girls to become ladies and installing, with a very firm but loving hand, the values of integrity, hard work, honesty and respect.”

In 2017, she was conferred with an honorary doctorate degree in educational management from the Federal University Oye-Ekiti, Ekiti State.

Mrs. Coker enjoyed music, films, and, until old age caught up with her, travelling.

Dr (Mrs.) Iphigenia Efunjoke Coker was a woman of impeccable and outstanding character.