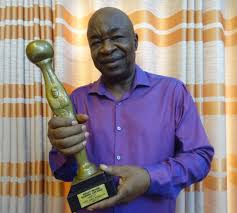 Wale Adenuga is a Nigerian series producer, who is popular for his productions; Ikebe Super, Binta and Friends, Papa Ajasco and Super Story. He was once a cartoonist and a publisher.

He was born on the 24th of September 1950, in Gbongan, to Chief J.A. Adenuga, a big businessman in Ile-Ife. At age 10, he moved to Ile-Ife, where he grew up. He attended St Luke, Gbongan, for his primary education, before moving to Ile-Ife, where he furthered his educational pursuits. When he moved to Ile-Ife, his parents enrolled him at the Ibadan City Academy, where he obtained his O-Level certificate. His academic prowess earned him a scholarship to King’s College, Lagos, where he obtained his higher school certificate. In 1971, he got admission into the University of Lagos (UNILAG), where he obtained a Bachelor of Science degree (BSc) in Business Administration in the year 1974.

As a child, he wanted to be another Jossy Ajiboye, who was a very popular cartoonist with the Daily Times, before he went into TV. He equally wanted to be like the late Doyen of Theatre in Nigeria, Chief Herbert Ogunde, Ade Love and Wole Soyinka, because they were great filmmakers, but life had another purpose for him.

While he was in Ibadan City Academy, he formed a pop band called the Social Brothers Band. They usually sang Ebenezer Obey and Sunny Ade’s songs to entertain the school. His interest in music died down in the University because not many people were interested in his music. As a student, who was interested in art and drawing, he worked for the cartoon section of the institution’s campus magazines. The experience inspired him to publish his own magazine as he was highly involved in the two major campus magazines and was the chief cartoonist for both.

In 1975 after graduation and youth service in the then Bendel State, his comic Ikebe Super Magazine was launched. Despite tough competition with other magazines, Ikebe Super proved to be popular among Nigerian readers due to the characters — womaniser Papa Ajasco, illiterate Pa Jimoh, and playboy Boy Alinco. A leading female character, promiscuous gold-digger Miss Pepeiye, was later introduced. Adenuga’s other magazines were Super Story, which focused on satirical issues and Binta, a children’s publication.

In the late 80s, Nigerian publications were affected by the economic depression, leaving Adenuga with the decision to move from print to electronic. Before the growth of the film industry, Adenuga had released the celluloid movie, Papa Ajasco, which was based on the main character in Ikebe Super, in 1983. Papa Ajasco made history as the first English comedy in an industry, which had been dominated by Yoruba productions.

On September 24, 1994, Adenuga and his wife, Ehiwenma, who met as students at the University of Lagos, in 1971, founded Binta International School in Lagos. In 2004, Adenuga opened the Pencil Film and Television Institute (PEFTI). Its courses include Producing, Directing, and Cinematography. The school was recently featured in De Film Industries van Nigeria, a Danish documentary on the Nigerian film industry.

In 2001, he won the Success Digest Enterprise Award for the Most Creative Business Owner of the year. At the Nigeria Film Festival in 2002, he won five awards for Best Producer, Best Script Writer, Best Director, Best Television Drama and Best Socially Relevant Television Production. He was also awarded by the City People Magazine as the Best Movie Producer of the Year (English) in 2019.

In 2009, he was conferred with the Member of the Order of the Federal Republic of Nigeria honour (MFR), as acknowledgement of his immense contribution to the growth and development of Nigeria. He has produced several TV shows, which include:

He is also the founder and Chairman of Wale Adenuga Productions, WAP TV, and the PEFTI Film Institute. He is also the co-founder (with his wife) of Binta International School.

He is an embodiment of intellectualism, dedication, hard work, and the community spirit; ever willing to give back his intellect, time and resources for the greater good of the country and humanity.