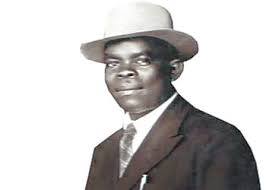 An exceptionally gifted man whose name and work echo into eternity. He exemplifies the hallmark of industry and entrepreneurial spirit of the Yoruba.
This great man toiled in his laboratory, writing the notes which contained the formula for what would ultimately be known as his famous patented medicine, ALABUKUN Powder. Alabukun means ‘Giver of Grace’.

The year was 1918. It was early in the evening of another hectic day at his place of work, a functional combination of office, consulting room and laboratory-cum workshop. His single minded pursuit of the goal of establishing an indigenous medical/pharmaceutical brand was legendary. He had displayed the same purposeful determination when at the age of 14, he decided to uproot himself from his ancestral town of Ikorodu and he had embarked on an exploratory journey which took him three months on foot to establish a domestic and commercial base in Abeokuta. His very modest, but cherished “headquarters” was built in the Sapon area of Abeokuta, a mere walking distance from the site of his future three-storey landmark home in Ijemo Agbadu.

A black man and member of the Yoruba ethnic group had triumphed against the seemingly insurmountable obstacles that the British colonial authorities had placed in the path of ambitious “natives”. He had penetrated the fortress of British-dominated commercial enterprise in nascent Nigeria, to become one of a very small group of Nigerian entrepreneurs in the colony. He had reasons to smile.

From the modest, but gradually escalating proceeds of the sale of Alabukun Powder, Alabukun Mentholine and other locally made products – all produced by him – the Blessed Jacob was able to realize his overarching desire, which was to underwrite all the expenses associated with sending his children to the land of the erstwhile colonial rulers, Britain, to further their education. One after the other, his offspring went off to study at Durham, Newcastle, USA and London to qualify as educationists, medical doctors, lawyers and engineers. They returned to Nigeria to join the pool of highly educated and successful professionals for which Abeokuta has been particularly famed in Nigeria history.

Alabukun’s offsprings have prospered and have made immense contributions to Yorubaland and to Nigeria in their various professions and spheres of endeavour. Amongst his children is Chief Folake Solanke SAN,who is the first Nigerian female to wear silk, became the first female Senior Advocate of Nigeria (SAN). She also established the first law firm by a Nigerian female at Ibadan in 1966, named ‘Alabukun Chambers’.

The enduring success of the Alabukun brand is now interwoven into the fabric of modern Nigeria medical history. The Alabukun Powder in particular is displayed and sold in thousands of pharmacies, markets and roadside stalls all over Nigeria. In many states in Nigeria, Alabukun powder is considered to be the obligatory cure-all for almost every ailment. In neighbouring countries such as Benin Republic, Ghana and Cameroon, the eye-catching Alabukun brand is to be seen advertised everywhere. Alabukun products are sold in several towns and cities in the USA, the UK, in Europe, Brazil, Jamaica, and yes, even as far away as China. You can buy Alabukun products on-line, off-line, under-bridges and over-expressways.
What a man! What a hero! What a legacy!

Blessed Jacob of blessed memory, DAWN Commission salutes and celebrates you as a foremost Yoruba inventor and pioneer in the healthcare sector. Your values and ethics live long after you.

Extracts from “The happy life of a pioneer” and culled from Nigerian Tribune. The writer, Chief (Mrs.) Stella O. Odesanya, MFR, is the eldest surviving child of Chief J. S. Odulate – Alabukun – The blessed Jacob.