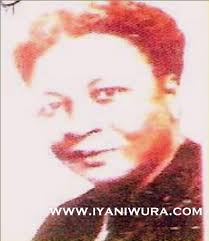 Women of Yoruba origin have been shattering glass ceilings for decades. Their influence can be felt in different facets of human endeavor and they continue to provide inspiration for generations of female inventors, influencers and pacesetters.
In the advancement of medicine in our society, the essence of the Yoruba woman is registered in the person of CHIEF DR. (MRS.) ELIZABETH ABIMBOLA AWOLIYI.

Chief DR. (MRS.) ELIZABETH ABIMBOLA AWOLIYI is the first female physician in Nigeria. In West Africa, women did not become medical doctors until after the first quarter of the twentieth century, some seven decades after their male counterparts.

Dr. Awoliyi who was born on November 10, 1910, in the defunct western region began her elementary school at the St. Mary’s Convent in Lagos State and from there to Queen’s College, Lagos. She proceeded to Dublin, Ireland to study medicine in 1929 after getting the Cambridge Examination Certificate.
She graduated as the first West Africa woman medical doctor with licentiate of the royal surgeon from university of Dublin, Cafrey’s College, (former College of Surgeon) with first class honors and a medal in medicine. She bagged a diploma in gynecology and obstetrics, diploma in child health and an additional diploma in midwifery.

She was a member of the Royal College of Physicians (United Kingdom), Royal College of Obstetricians and Gynaecologists (MRCOG) and President of Child Care Voluntary Association. Once a junior medical officer at the Massey Street Hospital, she later became the Chief Consultant and Medical Director for almost 10 years (1960-1969). The federal ministry of health appointed Awoliyi as a senior specialist gynecologist and obstetrician in 1962. As an outstanding philanthropist and a religious woman, she belonged to a number of charity organisations, which include;
Girls Association of Nigeria, The Catholic Women’s Association, Old Girl’s Association of St. Mary’s Convent School, St. Anthony’s Guild, Holy Cross Cathedral, Lagos (she was the first President of the Holy Cross Parish Women Council), Catholic Ladies Friendly Society, Motherless Babies Home Governing Council, Business and Professional Women’s Association (she was also the President), Child Care Voluntary Association (President), Young Women’s Christian Association, Lagos Colony Red Cross, National Council of Women’s Society (she was the first president of the Lagos Branch).

Professor Awoliyi in private practice excelled as a surgeon. She was also an avid business woman, who owned a 27-acre poultry and citrus farm in Agege, Lagos State. She was a director of the Commercial Medical Store, Lagos State which she meticulously administered. Dr. Abimbola Awoliyi Memorial Hospital is located on Lagos Island, Lagos, Nigeria.

She has acquired several awards and titles such as the Member of the Most Excellent Order of the British Empire (MBE), Iya Abiye of Lagos State (1962) and the Iyalaje of Oyo Empire. She was also awarded the Nigerian national honour, Officer of the Order of the Federal Republic (OFR).

The novel Return to Life, by her son Tunji Awoliyi, is dedicated to her. He is also mentioned in “Chapter Six: Nigerian Heroines of the 20th Century” in the book Nigerian heroes and heroines: and other issues in citizenship education, by Godwin Chukwuemeka Ezeh.