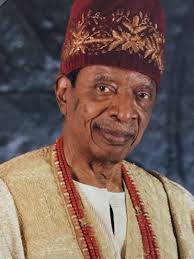 Christopher Oladipo Ogunbajo was born to the family of Daniel Ajayi Ogunbanjo a catechist from Erunwon, Ijebu Ode, Ogun State on December 12th, 1923 in Ijebu Ode, Ogun State, Nigeria. He is a corporate lawyer, business man and philanthropist. His father, Daniel Ajayi Ogunbanjo, was a Headmaster, a Deacon and later became a very prominent Pastor and Canon around the Old Western Region. His mother, the late Madam Towobola, hailed from a neighbouring village, Ijebu-Imushin.

He was educated at St Phillips Primary School, Aiyetoro, Ile-Ife before proceeding to Oduduwa College, Ife for his secondary education in 1936. Two years later, he transferred to Igbobi College in Lagos. He began work in 1942 as a junior clerk in the Judicial Department in Enugu and was subsequently transferred to Port Harcourt. He left the civil service in 1946 to study law at the University of London. He obtained a law degree in 1949 and was called to the bar in 1950. On his return from London, he worked briefly for the law firm of H.O. Davies before establishing his own private practice. His firm added two more partners, Samuel Ladoke Akintola and Michael Odesanya in 1952 to become Samuel, Chris and Michael Solicitors. The partnership was dissolved in 1960 and his practice became Chris Ogunbanjo & Co. The new practice specialized in corporate law and its one of the pacesetters in the building of platforms for many successful luminaries in Nigerian legal practice.
Within a few years of specialising in Corporate Law, he was spotted and appointed “Retainer-Solicitor” to the NIDB Project by the Federal Government and International Finance Corporation. Chief Ogunbanjo employed his profession, law, as a veritable instrument of change in the Nigerian Legal, Corporate, Industrial and Management Practice. His familiarity with corporate law led him to be a significant shareholder in various Nigerian companies like: West African Batteries, Metal Box Toyo, Union Securities, 3M Nigeria, ABB Nigeria, Roche Nigeria and Chemical and Allied Products Ltd.
Chief Christopher Ogunbanjo is often described in Nigeria as a Captain of Industry. He has established a reputation for promoting and nurturing industrial ventures. He was an early advocate of domiciliary accounts in Nigeria, which later came to existence through the promulgation of the Foreign Currency Decree 18 of 1985. In the late 1960s, he was among the group of businessmen who supported local equity participation in foreign firms operating in Nigeria.
As a business leader in Nigeria, he has been an articulate spokesman for the organised private sector and has over the years displayed good judgement in his various comments on the direction of the Nigerian economy. Chief Christopher Ogunbanjo has served Nigeria in various public capacities.
These include but are not limited to:
• The first Chairman of the Nigerian Council for Management Education and Training
• The first Chairman of the governing body of the Centre for Management Development
• The Chairman of the Study Group on Industrial Policy (set up by the Federal Government to examine industrial development in Nigeria in 1984).
• The Chairman of the Consultative Assembly on the Review of Company Law in Nigeria.
His traditional titles include: Asiwaju Ijebu-Imushin, Larinja of Egbaland, Bab Ijo, Church of Epiphany, Eruwon, Ijebu Ode, Bagbimo of Ilugun, Abeokuta, Olotu of Ijebuland. In 1982, He was conferred with the award of the Order of the Federal Republic (OFR) and Commander of the Niger (CON) in 2001.

DAWN Commission celebrates you Sir!
You are an AKINKANJU.