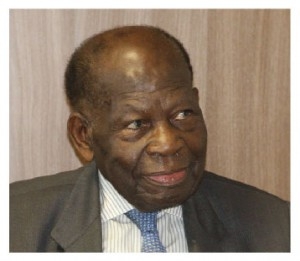 He was born in Lagos on August 9, 1919. He is the second son of Thomas Ekundayo Williams. He is the elder brother of late Chief Fredrick Rotimi Alade Williams (FRA), aka Timi the Law, who would go on to become one of Nigeria’s most famous lawyers. His formal education began at Baptist Academy, Lagos, in 1927. Following the completion of his secondary school education at CMS Grammar School in 1938, Akintola Williams went on to attend Yaba Higher College on a United African Company (UAC) scholarship from 1939 to 1941 where he attained a Diploma in Commerce.

As a student at Yaba Higher College, he was not interested in pursuing a career in accountancy: surveying was what had piqued his interest, but he found that he was unable to explore this avenue of learning because the College did not offer courses in surveying. He then entertained the idea of studying actuarial science and was preparing to move to England in order to take the course when he met an expatriate named John Selby.

Selby was a chartered accountant working for the Inland Revenue Department in Lagos who counselled and convinced Williams to seriously consider a career in accountancy. Both Williams and Nigeria would forever be grateful to Selby for his advice. In 1944, Williams would leave Nigeria on a government scholarship for the United Kingdom in order to train as a chartered accountant. The first few months in England were an ordeal for the young man as the Second World War raged on and racial prejudice reigned. Very few accountancy firms were willing to take on coloured articled clerks. After months of searching for a job, Williams joined the firm of Binder Hamlyn & Co. as an articled clerk.

In 1946 whilst serving his articles and studying for his accountancy examinations, he completed his degree in Commerce at the University of London. In December 1949 Williams passed the final examinations of the Institute of Chartered Accountants in England and Wales and was admitted as a member of the Institute early in 1950. With this achievement he became the first Nigerian chartered accountant.

After qualifying as a chartered accountant, Williams took up employment with the Colonial office in London and was posted to Nigeria. He returned home in 1950 to take the post of Inspector of Taxes where he would work with John Selby, whose advice years earlier had prompted him to consider accountancy.

Williams soon resigned from his post at the Inland Revenue Department and set up his own firm. The firm of Akintola Williams & Co. was founded in May 1952 and was the first indigenous firm of accountants in Nigeria. This decision was a bold one, as he left behind a high salaried job with benefits such as free accommodation for a post with no assurance of steady income and intense competition with established international firms.

Operating out of his home in Obalende, the firm managed to survive its early years through the patronage of highly successful Nigerian entrepreneurs such as Dr Nnamdi Azikiwe, Chief Timothy Odutola, Sir Odumegu Ojukwu and Sir Mobolaji Bank-Anthony. In October 1957, having grown steadily, Akintola Williams & Co. was able to admit its first partner: Charles Sankey. The firm would go from strength to strength, eventually becoming Nigeria\’s largest professional services firm following two mergers between April 1999 and May 2004. The firm today has more than 600 members of staff and operates under the name of Akintola Williams Deloitte.

Akintola Williams motivated and mentored many young Nigerians who followed in his footsteps and became qualified chartered accountants in the late 1950s and early 1960s. In December 1960 he co-founded and was named the first President of the Association of Accountants in Nigeria. A strong believer in one unified body of accountants in Nigeria, he was one of those who worked tirelessly to achieve the incorporation of the Institute of Chartered Accountants of Nigeria (ICAN) through an Act of Parliament in September 1965.

The Nigerian Government honored Williams with the Order of the Federal Republic (OFR) in 1982 and Commander of Federal Republic (CFR) in 2001. In 1997, Queen Elizabeth II conferred the title of Commander of the British Empire (CBE) on him in recognition of his services to the accountancy profession and for his promotion of arts, culture and music through the Musical Society of Nigeria (MUSON), a project he began in 1993. He retired from his firm in 1983 and was awarded ICAN’s first ever Gold Medal Merit Award in 1988.

Chief Akintola Williams, who clocked 100 on Friday, August 9, 2019, has been described by many as a true Nigerian who has actually contributed to the development of Nigeria.