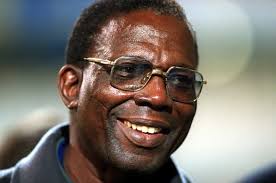 Chief Adegboye Onigbinde was born in Modakeke town (present day Osun State) to the Jagun Omode dynasty on March 5, 1938. His mother was a petty trader who was involved in many trades, while his father, Akintunde Omode Lola was a farmer. Because of his peculiar background, he did not start primary education until he was 10 in 1948 due to his late arrival. He was called an omo ayo, meaning a child that was late in coming to the world. So, he was overprotected from danger and undue exposure.

He started playing football while he was in primary school. His teachers usually selected him for training after school, but because he had to go to either the farm or for drumming, which was his family business, there was no time for me to attend training after school. When he got to Teachers College in Ilesa, he had enough time for sports. He was part of the first football team at that college. From then, he began to display his dexterity in sports and to receive awards. After graduation as a Grade Three teacher from training college, he went back to his old primary school and became a games master there. He was also invited to the Ile-Ife divisional team.

Meanwhile, by 1957, there was a prominent footballer in Nigeria called Teslim Akanni Balogun, popularly called Thunder Balogun because of the power of his shots. After playing for some clubs in Nigeria and the national team, Balogun decided to go to England to play his football. He was doing well at Queen’s Park Rangers and other clubs he played for in England when the then Premier of the Western Region, Chief Obafemi Awolowo, got to England to attend the Constitutional Conference.

Chief Awolowo got across to Thunder Balogun and urged him to return to Nigeria as a coach with the Western Region Sport Council. When Balogun was touring the old Western Region in 1958 looking for talents, he spotted Onigbinde in Ile-Ife and asked him to join a football team in Ibadan. He rejected this offer because he was already a Grade 3 teacher earning 10 pounds per month.

He later reunited with Teslim Balogun at St Luke’s Teacher Training College, Ibadan. One day, in 1960, while training with the senior students at the college, they discovered that he was better than the school goalkeeper and that was how he became the goalkeeper throughout 1960. In 1961, he became the captain of the team, as well as its coach. He was inviting Teslim Balogun occasionally to supervise his coaching. As the chief coach at the Sport Council, Teslim Balogun organized a coaching course and invited the then national chief coach, Mr Bet Hallevy, to conduct the course. Onigbinde was part of the potential coaches invited for that course. At the end of the course, he was among the 12 people who obtained the coaching certificate in 1961.

In 1962, he was posted to the Ilesa Secondary Modern School. That year, the Ijesa Divisional Sport Council held their annual meeting and Onigbinde was appointed a coach/player with the Ijesa divisional team. After a year, he took the entrance examination course to the Rural Education College, Akure. There was no sport in that school’s curriculum until he got there and set up a school team.

He also taught at a staff school at the then University of Ife (now Obafemi Awolowo University), where he coached the university workers’ club from 1971 to 1974. Coincidentally, it was during the time that he got involved in drama. The director of the drama group was the late Ola Rotimi. In Kurunmi, which he produced, Onigbinde acted as Balogun Ibikunle. In Rere run, he acted as Lawuwo and in Ogun, he was the Onimogun, the Oba.

Chief Onigbinde became Head Coach of Shooting Stars FC following his stint as coach of the national team that led the country to the finals of the 1984 African Champions League. In that year Shooting Stars had their best attempt to win the African trophy that had eluded the country since Independence for the very first time.

He is also a professional match referee. He became a registered referee in 1958 and later rose to the level of a Grade 1 referee. In 1971, he was appointed as the National Training Officer for Nigerian referees.

Even at this age Chief Onigbinde who is also the Ekerin Balogun of Modakeke, remains a solid voice in Nigerian football, looking as if he can still take on the responsibility yet again of handling the national team if given a chance. He remains one of a very few Nigerians that have had the privilege to manage the Super Eagles twice. In 1984, he took Nigeria into the final match of the 1984 Africa Nations Cup. Nigeria lost 1-3 to Cameroun in that match. Again in 2002, he coached the Nigerian national team at the 2002 FIFA World Cup in South Kore/Japan.

Chief Adegboye Onigbinde and football are like Siamese twins. They go together hand in hand. Discussing football is his cup of tea, anywhere, any time. He would always mesmerize any audience with the quality of his elocution and depth in the knowledge of the game. Several players do not agree with his football philosophy or style, but that he worked longer than any other African in the technical committees of both CAF and FIFA, speak volumes about what the rest of the world thinks of him.

DAWN Commission celebrates Chief Adegboye Onigbinde, a great patriot, an accomplished football technician, a foremost sports administrator, a teacher of the beautiful game and an epitome of Omoluwabi.