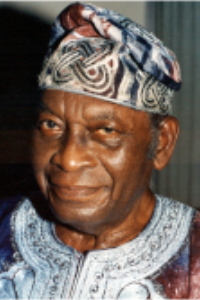 …the First Nigerian Professor of Education

He was the first Nigerian Professor of Education.

He was a Nigerian educationist, a scholar and a former Minister for Education.

As a Minister, he was in charge of the biggest school system in Africa. He was known for his early writings on the need to re-appraise the inherited colonial epistemological system in Nigeria and to introduce relevant cultural goals, subjects and local languages into the system, in order to accommodate the developmental and cultural pattern of the country. He was also a notable authority on the history of educational planning in Nigeria.

He started his career in 1961 at the University of Nigeria (UNN), Nsukka. During the Nigerian Civil War, he left the East and moved to Ile-Ife, and taught at the Obafemi Awolowo University.

He was also Pro-Chancellor and Chairman of Governing Council, University of Calabar. He was at several times, President, Association of Teachers Education in Africa, Director, International Council on Education for Teaching, Washington D C. He retired from active teaching service in 1978 to start the first tutorial college in Nigeria in 1982 and was Minister of Education between 1990 and 1992.

While at Nsukka, in collaboration with his colleagues at the education department, the department drafted a proposal to admit Grade II teachers into a new two year degree program at the Faculty of Education. The proposal was subsequently adopted and in a few years led to the emergence of the Nigerian Certificate of Education and further broadened the acceptance of Colleges of Education in the university system; today a lot of the colleges are affiliated with universities. He also continued an innovative tradition, already in existence at Nsukka, when he began to implement a curriculum for granting a bachelor’s degree in education, the first faculty in the country to do so.

In 1977, a long time proposal of his to incorporate native languages into pedagogy was finally accepted. Today, most Nigerians learn at least one Nigerian language. Fafunwa and a few other African educationists had argued that embracing wholeheartedly without evaluation foreign systems of education and epistemology, can create the potential for epistemological dis-orientation. Introducing, cultural objectives and environmental familiarity will provide a continuity and balance into the educational advancement of a child and his place in his community.

Babs Fafunwa died in the early hours of 11 October 2010, at a hospital in Abuja, the Nigerian Federal Capital Territory and was buried in Lagos.