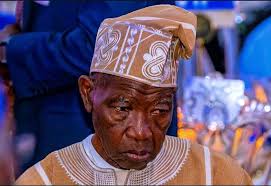 DAWN Commission mourns the passage of Alhaji Lateef Kayode JAKANDE who died after a brief illness on Thursday, 11th  February, 2021 at the age of 91.

Alhaji Lateef Kayode Jakande was a renowned journalist and the first civilian Governor of Lagos State. He began his career in journalism with The Daily Service in the late 1940s and later joined the Nigerian Tribune.

Lateef Jakande was born in the Epetedo area of Lagos State on the 29th of July, 1929. He attended a public primary school in Lagos Island before moving to Bunham Memorial Methodist School, Port Harcourt. He returned to King’s College, Lagos State to continue his Secondary School which he later completed at Ilesha Grammar School in 1945, where he edited a literary paper called The Quarterly Mirror. Two years after this, 1949 to be precise, he was through with his secondary education and thus, ventured into his dream career, Journalism, at the age of twenty.

In 1956 he was appointed editor-in-chief of The Nigerian Tribune. His editorials were factual and forthright, and were treated by the colonial powers with respect. Shortly after he left The Nigerian Tribune, he established John West Publications and began to publish The Lagos News in the 1970s. Due to his eloquence and commitment, he was appointed the first President of the Newspaper Proprietors Association of Nigeria (NPAN). Being an editor of Tribune which happened to be the mouthpiece of the Action Group and the Nigerian Youth Movement, he was literarily got introduced to politics a decision which he did not regret.

In 1979, Jakande was inspired by the Late Chief Obafemi Awolowo to contest for the Lagos State governorship election on the Unity Party of Nigeria platform in an election which he defeated his opponents, Adeniran Ogunsanya of NPP and Sultan Ladega Adeniji Adele of National Party of Nigeria and was subsequently sworn in as Governor. Lateef Jakande had made a good name and reputation for himself, in the popular Yoruba phrase, as Omoluabi. Hence his popularity among the low and high cabins of the society was enhanced. He led a very successful administration as he opened and implemented the cardinal policies of his party. He introduced housing and educational programs targeting the poor, building new neighbourhood primary and secondary schools and providing free primary and secondary education. As Governor, he also established the Lagos State University and then constructed over 30,000 housing units. The schools and housing units were built cheaply, but were of great value. Some of the housing units include low cost estates in Abesan, Abule Nla, Amuwo-Odofin, Anikantamo, Badagry, Dolphin, Epe, Iba, Ijaiye, Ije, Ikorodu, Ipaja, Iponri, Oke-Afa, and Surulere. He increased the tenement rates and price of plots of land in affluent areas of Victoria Island and Lekki Peninsula and the processing fees for lottery, pools and gaming licenses so as to be able to fund some of his projects. He also completed the construction of the General Hospital in Gbagada and Ikorodu and built about 20 health centres within the state thereby improving on the state of the health sector, in the early Eighties.

Today, these hospitals are providing the needed medical attention to patients experiencing various medical challenges. He also encouraged the development of traditional medicine and its application for the treatment of patients when his government established the Traditional Medicine Board. This initiative expanded the choice of the people of the state to seek the type of medical services that suit them.

In spite of the huge cost of building materials at that time, his government was able to achieve its objective through some creative ideas. This includes the creation of a State Bulk Purchase Corporation and a Works Management Board which bought buildings and other materials in bulk and local contractors, amidst competition. Other notable ideas include the establishment of Asphalt Plant for the Department of Public Works as well as Electricity Board for Rural Electrification.
In addition to these projects, his government constructed the Adiyan Water Works to increase water supply in the state to 18.16 million litres per day. It modernized and expanded the Iju Water Works which was first commissioned in 1915 which led to an increase in daily capacity from 159 million to 204 million litres per day.

The Lateef Jakande government was responsible for the building of the Lagos State House of Assembly complex, the Lagos State Television, and the Lagos Radio. The footprint of the Jakande government could also be seen in the area of transportation. Similarly, the government was responsible for tackling the ODD/EVEN Traffic System problem in the state. He established the first State Traffic Management Authority (Road Marshals under the headship of Chief S. O Ige a distinguished Lagos Lawyer). The government also boosted Water Transportation when it established the State Ferry Services Corporation which immediately acquired its own fleet of boats.

Lateef Jakande also made an attempt to develop an effective Civil Service system. Recognising that the Civic Service plays a significant role in the provision of public goods and facilitation of government functions, his administration tried as much as possible to improve the service delivery of this institution. He encouraged staff development and training programmes which was vigorously pursued for both the senior and junior staff in the service of the state. Admission process for Administrative Officers was developed in such a way that allows them to pass through various tests, including written aptitude test and extended interview by the Civil Service Commission.

Local government administration was another area where the Lateef Jakande led-administration left an indelible mark. He brought an innovation into this tier of government when he created the post of Heads of Local Government Service; e.g. Head of Service, the Heads of Local Governments were charged with such duties as: staff development and training, provision of leadership and direction for the LGs, advice on the appointment and deployment of Council Managers, among others.
It is noteworthy to remember that Lateef Jakande matched his achievements with good moral values and discipline, and his policy was beneficial to the poor and to the nation at large. He was not given to ostentatious lifestyles. As Governor, he barely travelled out of the country since he was convinced that the resources and talents needed for his job were all in the country. He also showed that his work as governor of the state does not necessarily mean he has to live on the resources of the state. He demonstrated this when he refused to move into the comforts of the governor’s official residence. He opted to live in his private residence located at Ilupeju and commuted to work in his private car. He also showed this attitude in relation to his family. As a father, he ensured that members of his family went to the same state-run schools and hospitals provided by the government.

He started a metroline project to facilitate mass transit. The project was halted and his tenure as Governor ended when the military seized power on 31 December 1983. After the Military take-over, Lateef Jakande was appointed Minister of Works under the Sani Abacha military regime.

Lateef Jakande’s sterling qualities and records of achievement should serve as a compass for the promotion of purposeful leadership, good governance and the development of the Southwest Region of Nigeria and by extension, Nigeria at large.

Alhaji Lateef Jakande remained an embodiment of intellectualism, dedication, hard work, and the community spirit; ever willing to give back his intellect, time and resources for the greater good of his State, country and humanity.
Alhaji Lateef Jakande … a big loss to Lagos and Nigeria at large. A man of impeccable character and an outstanding gentleman.