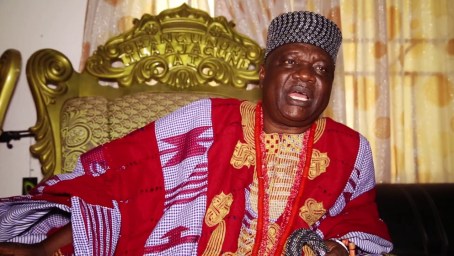 Oba Adedokun Abolarin was born on September 24, 1958 into the Obasolo Ruling House, one of the three ruling houses in Òkè-Ìlá-Òràngún, Ifedayo Local Government area of Osun State.

He obtained his First Degree in Political Science from the University of Ife (formerly University of Ife). Upon completion of his mandatory one-year service, he took up a lecturing job at the now defunct Oyo State College of Arts and Science (OSCAS), Ile-Ife. Where he taught Government as a subject.

His teaching prowess endeared him to all students that even those in other disciplines will sneak into his classroom to hear him teach. He went back to the University to pick up a Law Degree and after leaving the Nigerian Law school, he set up his own practice. He later moved to Abuja and became the legal adviser to Senator Anyim Pius Ayim, the then Senate President of the Federal Republic of Nigeria.

Until his installation, the new Òràngún of Òkè-Ìlá, Oba Adedokun Abolarin, a professional lawyer licensed to practice law in the Supreme Court of Nigeria, was the principal partner of Dokun Abolarin & Co., a firm of Solicitors and Legal Consultants, which had served as Company Secretary to various corporations among whom are Tell Publications (Publishers of Tell Magazine), Pacific Holdings, Peachtree Communications Ltd, Sportsmark International and Springtime Development Foundation.

Oba Adedokun Abolarin is an academic authority on Nigerian government and politics having researched and written on the period from the 1914 amalgamation to recent times, in which he evaluated component elements of federal, regional/state, and local government administration, analyzed Nigerian foreign policy, political parties and pressure groups. As is traditional among the Yoruba for a new king or monarch, Oba Adedokun Abolarin chose at his installation the “reign name” Aroyinkeye I, translating as “one who finds honey to tend the title”.

Citizens of this ancient Igbomina-Yoruba kingdom across Nigeria, and especially Europe and the Americas often express their thrill and excitement at the prospect of the development which the well-educated king promises for the city and its satellite towns.

Oba Abolarin was the former Chairman of the Osun State Council of Arts and Culture. He is also a member of the 15-member committee of the Osun State Directorate of Amotekun (a security network based in all the six States of Western Nigeria, which is responsible for curbing insecurity in the Region)

Oba Abolarin is the Founder of Abolarin College, Oke-Ila-Orangun, State of Osun, a school set up to fight poverty through education and strictly for indigent students of Nigeria. He is also a member of the college’s teaching staff and he teaches Government as a subject to Senior Secondary students, who he also instructs on styles and etiquette.

Kabiyesi has contributed to the improvement of lives of people within and outside his domain. His culture of teaching, counselling and mobilizing everyone for civic responsibilities can never be overemphasized.

DAWN Commission salutes the courage, wisdom and wealth of experience that he has brought to his people and the high standard of consistently leading by example.