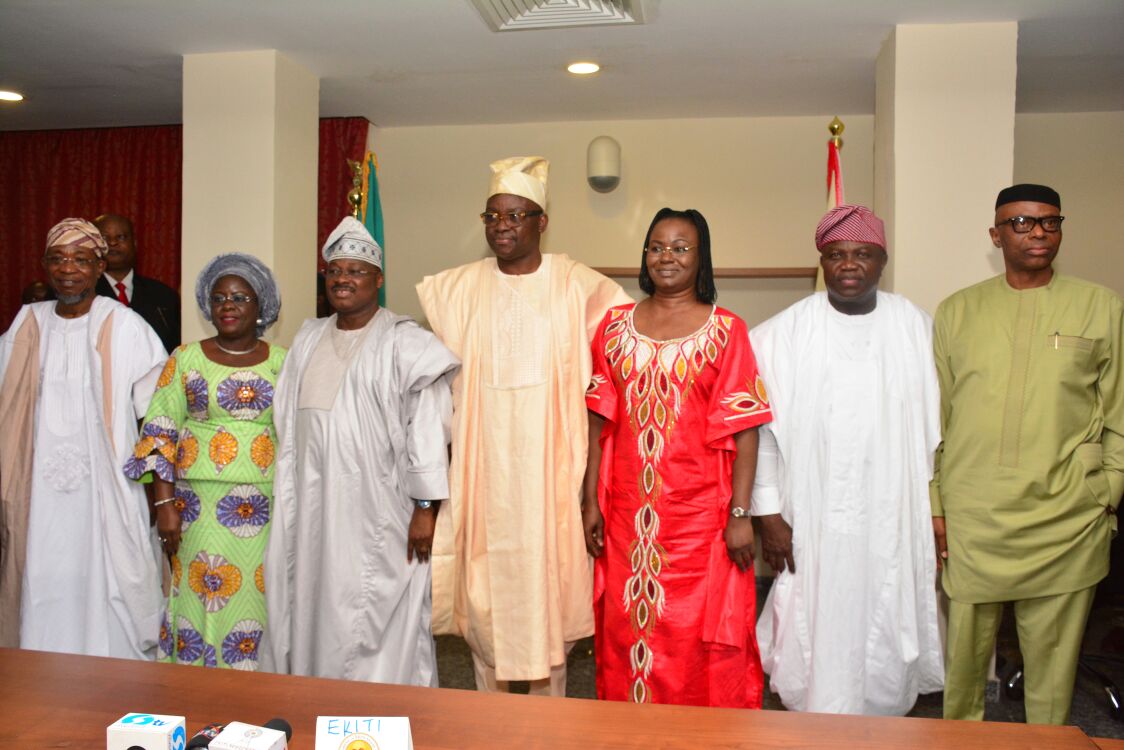 WELCOME ADDRESS BY THE EKITI STATE GOVERNOR, MR AYODELE FAYOSE AT THE QUATERLY MEETING OF THE SOUTHWEST GOVERNORS’ECONOMIC FORUM HELD AT THE GOVERNMENT HOUSE, ADO EKITI ON MONDAY, FEBRUARY 13, 2017

I welcome you specially, to this very important meeting, which is aimed at fostering unity and development in the Southwest States.

Particularly, I appreciate my brother governors for this visit, which to me and the people of Ekiti, is historic. It is historic because the meeting is holding in my state, not minding that the last meeting was my first attendance. I appreciate you.

I also acknowledge our collective patriotism in fostering unity and development in the Southwest States. No doubt, your sincerity at the last meeting held in Ibadan, Oyo State won me over and I am now more than ever before, committed to the integration and collaboration of the Southwest States.

Most importantly, it is not our own making that we are brothers from the same zone, and if we are serious about developing this zone, we have no option than to be our brothers’ keeper.

Therefore, to move the Southwest zone forward, we must respect the political beliefs and opinions of others and we must not do anything that will undermine one another.

To me, national politics should add value to us, and not divide us.

Americans go about fighting their political battles without undermining the collective interests of their country, and that is the kind of spirit with which we must operate if the Yoruba nation must regain its pride of place in the Nigeria nation.

We must constantly ask ourselves; where is the Southwest in the scheme of things in Nigeria?

This gathering must however not be about talk, talk and talk all the time. There must be affirmative actions; else, we will lose the confidence repose in us by our people. We must take decisions on what to do that will make the difference in the lives of our people in the immediate.

With the present economic realities, it has become pertinent that the necessary political will is put behind agriculture, education, security and physical infrastructures on the long run.

For Instance, in the area of education, it is time for us to have a common curriculum.

Also, we must ensure cooperation among our security chiefs, such that if a car is stolen anywhere in the region, it will be found before being taken out of the region.

This task may appear enormous, but if we are determined and speak with one voice, as a people, it is achievable.

However, in promoting agriculture, we must take into consideration the menace of herdsmen, which has become major impediment. The question is, how do we continue to encourage our people to embrace farming when their investments are being lost daily?

We must therefore adopt a common strategy to curb this menace before we are consumed by hunger.

Apart from the herdsmen, there is also need for us to use our influence to secure assistance from the federal government in the area of construction of dams for irrigation as well as storage facilities. No doubt, if we must make agriculture the mainstay of our economy, as in the time of old, it must be mechanised and we must use our reach and influence to get the federal government to do the needful in the Southwest, as being done in other zones.

History will forever remain kind to the late sage, Chief Obafemi Awolowo for his leadership role and developmental strides.

He was the rallying point for the Yoruba nation because of his selflessness and sense of patriotism. We must take a cue from him.

We must be reminded that even though the then Yoruba nation was balkanised into states, which we are privileged to lead at this time, we still remain one entity, with common language, tradition and culture. I therefore want to appeal that for this Regional Integration to achieve the desired objectives, politics must play the back role while we collectively determine our place, benefits and status as Yoruba nation in the Nigerian nation.

For instance, in the 2017 federal government budget, the Southwest is one of the least beneficiaries.

The federal government 2017 budget is about N7 trillion and the only capital project allocated to Ekiti State is the Akure – Ado Ekiti road to which N250 million was earmarked. What can N250 million do on Akure – Ado road that is begging for reconstruction? There is even no guarantee that the N250 million budgetary provision will be made available at the end of the day. I am sure this is applicable to other states too compared to other zones.

We must therefore ask pertinent questions. How much did the federal government allocate to irrigation, construction of dams and storage facilities to boast agriculture in the Southwest?

We must equally take collective interest in the annual national budget to ensure that states in the Southwest are adequately catered for. This we must do by using our technical people to study the budget and make inputs on our behalf.

One other germane issue I will want us to look into is the federal government $1 Billion Eurobond, re-payment of which is to be made from source (before accruing to the federation account) and expected to last till 2032.

As representatives of the people of the Southwest, whose future will be affected by this $1 billion Eurobond, I expect that we look beyond party politics and ask questions as to the beneficiaries of the bond, its repayment and what the Southwest will benefit from it.

We must therefore constantly engage our representatives in the Federal Executive Council (FEC) and the National Assembly and impress it upon them that they must use their positions positively for the zone.

I must not end this address without mentioning the rail project that we discussed in our last meeting. This project will go a long way in changing the economic fortune of the zone and this initiative must not be allowed to die.

In closing, while appreciating the efforts of the Development Agenda for Western Nigeria (DAWN) Commission, it is my pleasure to welcome you all to Ekiti where we always come first in education. I thank you for conceding the hosting of this meeting to my state, not minding that I have only attended once. This brotherly love, I will not take for granted. I see this as the new beginning for the Southwest.

Thank you, and God bless you all.