Paradoxes of Natural Resources in Africa 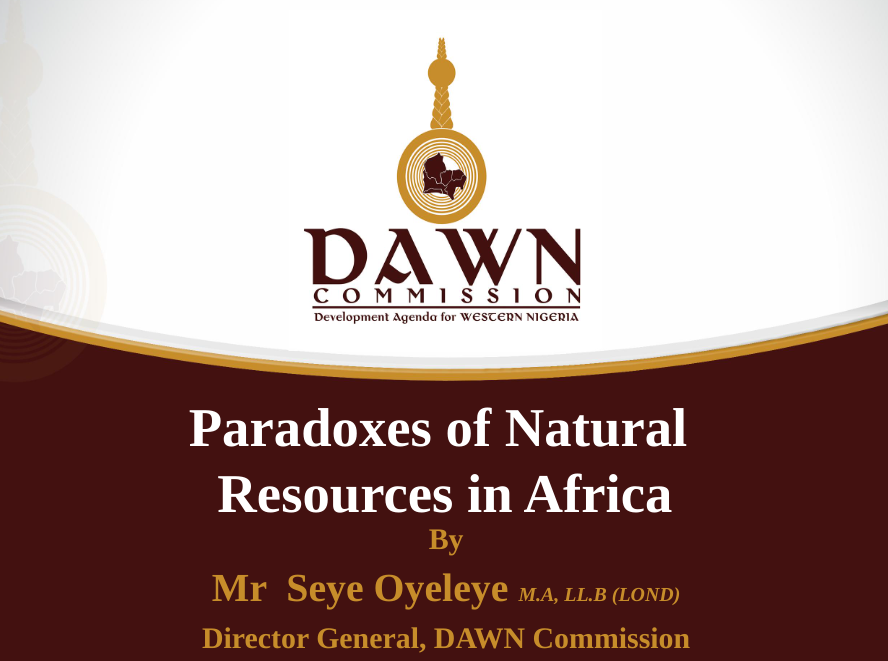 Paradoxes of Natural Resources in Africa

Being a presentation delivered virtually by the Director-General of DAWN Commission, Mr. Seye Oyeleye at the 3rd Circularity Africa Week 2022 at the International Conference Centre, University of Ibadan, Ibadan on Thursday, May 12, 2022.

Since the formation of the earliest human communities and societies, resources drawn from nature have been a source of income and livelihood.

However, with the advent of the 1st industrial revolution in Europe, North America and Japan in the mid 18th century, these natural resources were transformed into finished and semi-finished products with the use of newly invented machines.

The industrial revolution increased wealth and distributed it more widely than had previously been the case, helping to enlarge the middle class in the aforementioned countries.

Unfortunately, due to increased demand and the need to power emerging industries in Europe and the Americas, the pursuit to colonize territories was amplified.

Global powers in the late 18th and early 19th century through mercantile companies (e.g. Royal Niger Company, the East Indian Company, Dutch East India Company) established colonies in much of the global south and began the systemic exploitation and exportation of these territories’ resources to power the ongoing industrial revolutions in their home countries.

Amongst the many effects and legacies of colonialism on these territories is what is known as the resource curse.

Colonialism dismantled existing structures and institutions that were already utilizing some of these natural resources for the good and welfare of their people.

It instead created systems that encouraged the extraction of natural resources with little to no focus on host communities.

What is the Natural Resource Curse?

It is a situation in which countries with an abundance of non-renewable natural resources experience stagnant economic growth or even economic contraction (Fernando, 2020).

Although it seems logical for one to expect better development outcomes after countries discover natural resources, resource-rich countries tend to have higher rates of conflict, authoritarianism, and lower rates of economic stability, and economic growth, compared to their non-resource rich counterparts.