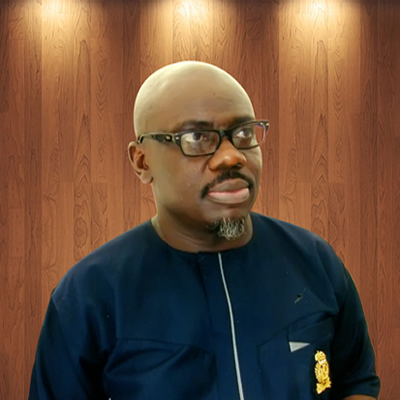 Mr. Seye Oyeleye is the Acting Director General, Development Agenda for Western Nigeria (DAWN) Commission, a think-tank dedicated to the ideas and ideals of socio-economic development of the six states within southwest Nigeria. In this interview with Ibrahim Apekhade Yusuf he speaks on concerted efforts to turnaround the fortunes of the region. Excerpts:

The only politics we play is politics of development.

Whatever benefit people get is what we are after. So as an example, in the area of agriculture, we are linking the six states now to work together. Cocoa used to be our mainstay in this region; we have revived it working in tandem with the Nigeria Incentive-Based Risk Sharing System for Agricultural Lending (NIRSAL) and the Central Bank of Nigeria (CBN). We’re equally working with Lagos state on the rice project.

Lagos is in the process of acquiring land across the six states to feed the rice mill that is being established in Lagos. DAWN is the organisation putting these things together to make sure that all the states benefit from these business ventures. So Lagos is going to have the market and the other five states will be supplying rice into that market.

As I said, Lagos is going round at the moment using land and we’re just making sure those farmers in those states benefit from Lagos market. Truth is, if as a country we expend over N2b annually on rice and Lagos alone consumes up to 35% of these rice, we think that if these five states can tap into a fraction of that billion, it brings prosperity back into the region, in terms of economic development.

We’re also talking of having a transport hub in the region. The designs are there. We’re thinking of linking all the state capitals on rail. It might sound long-term and utopian, but trust me, the plans are there. We have drawn the maps and seen how doable this is. These are some of the things we do as a Commission.

In the past, we have been asked what projects have you done? We don’t implement projects; we only think through the ideas and see how it’s going to work and then make sure that the six states seat together to achieve their set objectives. And we have been able to do that in the last four years. Whatever is good in Ogun state that can be replicated elsewhere, we take it there. That is our job.

We’re setting purely economic development agenda for the region because we think it’s the way to go. At the moment, all the states still come to Abuja cap in hand before they can survive. They go to Abuja for monthly allocations. But what we are doing is try to move or to change that story that instead of relying solely on a monocultural commodity called oil and everybody now becomes an oil features marketer that looks at the oil prices every day, we can look inwards and see what we can do within our region that can ensure economic stability and sustainability.

The way we are, we are not a commercial organisation, although we do some other consultancy services. But primarily, our source of funding is through the six states. They have an agreed amount that they allocate to the Commission on yearly basis. DAWN is their baby so by and large, the six states have been faithful, making sure that things work. Even though they are funding us, they don’t interfere, down to the recruitment process.

They tell us just get the best and thankfully, all the tasks they’ve given to us have been helpful and we have tried to meet all their expectations.

On building synergy of cooperation with other organisations

Last month, our brothers from the southeast spent days with us just trying to understand what we’ve been doing. They too have already started that. I told you earlier on that we’re doing something for cocoa and we were told to involve other cocoa-producing states outside the six southwest states. We started with Edo, and we have had meeting together and they see what we are doing as fantastic. Even our brothers in Kwara, Kogi applauded us because they know that the only thing we are doing is primarily development.

As I said earlier, we are apolitical and that means that we don’t get involved at that level. Our main concern is how to grow the economic fortunes and restore the past glory of the region as a strong economic bloc contributing its own quota to the development of the country as best as it can.

Of course, we enjoy the cooperation of a lot of organisations whether in the organised private sector or the public and we are equally open to partnerships as well. And I believe it is the way to go because nobody is an island. I believe strongly that as individuals, state or nation, we all can work together to achieve the common good instead of working at cross purpose. That’s what I call politics of development.

On making the region investor-friendly

At DAWN, our vision is to make our region the first place to live, to work and to invest. One critical area that we are working on with the states is in the area of security. I always say that you can go abroad and showcase your state as investor-friendly and all that; it only takes the investors to open his laptop or phone and look at the security situation in the area. So we are thinking as a region holistically, we have regular meetings of security agencies and even security apparatus of the states, we regularly meet and come together and map out strategies.

Recently we were having Badoo crisis in Ikorodu. But today now, it has died down due to the concerted efforts of the states within the region are working in collaboration. Security is not just one state issue. There is no point in Lagos state chasing out armed robbers and kidnappers out of the state to Ogun and vice versa. So we are jointly working with other commissions, security is just only state affairs.

Relatively in the country, infrastructure wise, this is most advantageous region. So infrastructure wise, investors will come, they want to be sure that their investment is safe. We are also working with federal government on the Ease of Doing Business. We do that again in the Commission so that investor that is coming in will know that even if he invests, his investment is safe. He has recourse to law in case there is any infraction.

If he needs access to anything it’s easier than having all the obstacles along the way. Again, we are working with the six states on the area of Ease of Doing Business. Ogun state is showcasing that, they used to be over 21plus in the national ranking but today they are number three. So these are the things that we are doing to make sure that as long as it works well in one state, we don’t find it difficult to achieve in other states. So we are trying to make ourselves investment-friendly as a region. And also we are encouraging our states to invest in infrastructure, particularly roads, railway. Yes the federal government roads are bad, but there are roads that states government can construct and link each other up.

For instance, even on the airport matter I have heard people tell us that why is Osun state constructing an airport? My question is, why not? The challenge we have as a country, I have said this several times, is that we are too short-term in our thinking. The state of Osun said categorically that this airport what they are looking at is that they want it to be more of a cargo airport than a passenger airport. We might be thinking that why did the state had to do that? But 10 years from now, what we are thinking is foolish today will be wisdom when the country becomes the hub of aviation in West Africa.

Then why can’t Osun position itself as an airport maintenance point? Why should our aircrafts fly to South Africa to do C or E checks their? That is what they are actually doing there they are also building what they called theme parks. So it’s a holistic development. We shouldn’t just look at the headlines alone, but look at other pictures. This is 2017, in 2027 in 10 years down the line, that airport would have been a good idea for that state. For me, I say it repeatedly, if you want to attract investors into your state, please don’t think of now; your vision should be out of this world-beyond now. If your vision is still very small, you find it difficult to bring investors. I believe that is the thinking behind what the State of Osun is building the airport. To us, we might think it’s not necessary but I disagree. The Commission is doing a lot even in the area of sports and in the next few weeks, there is something we call the Western Nigeria Cup which will bring together all the football clubs in the region for a seasoned football tournament. It’s going to be held in Lagos. About 16 clubs from the six states will be participating. You recall that in the past, this region produced the likes of Segun Odegbami and all that. But we know we’re not there today. Apart from sports, think of the employment opportunity. In the area of sports, we are doing a lot to energise our youths by giving them gainful employment. We are talking of drug addictions, there a lot of things we put in place in the area of sports that will discourage them from social vices.

Culled from The Nation Newspaper