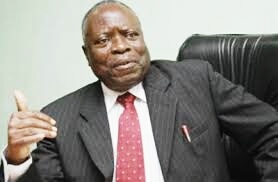 Hon. Justice Emmanuel Olayinka Ayoola (CON) was born on October 27, 1933 at Ilesa, Osun State and attended Temidire Model School from 1939 to 1943 for his primary education and Ilesa Grammar School from 1944 to 1950 for his secondary education. He studied as an external student of the University of London and was a full-time undergraduate at Oxford University London from 1957 to 1959.

He obtained the Bachelor of Laws degree, LLB, from the University of London in 1957 and the Bachelor of Arts degree from Oxford with Honours in Jurisprudence. In May 1957 he passed the Bar Final Examination of the Council of Legal Education, London and was called to the English Bar at the Lincoln’s Inn, London, on 25th November 1958. He was admitted as Barrister and Solicitor of the Supreme Court of Nigeria on the 4th of September 1959 and started private legal practice that same year.

He was a partner in the firm of Ayoola Brothers (Barristers and Solicitors) from 1962 to 1967 and from 1967 to 1972 was the principal of the firm of legal practitioners of Ayoola & Co. It was during that period that he was retained by the University of Ibadan from 1972 to 1976. After 17 eventful years as a legal practitioner, Hon. Justice Ayoola was appointed a judge of the High Court in the defunct Western Nigeria on 1st February 1976.

Three months later, he became a judge of the High Court of Oyo State following the creation of 19 States by the then Head of State, Gen. Yakubu Gowon’s administration. From then on, Hon. Justice Ayoola has bestrode the legal profession both at home and international levels like a colossus. Due to the brilliance displaced by Hon. Justice Ayoola on the bench within four years, he was seconded by the Federal Government of Nigeria to the Gambia in 1980, as a Justice of the Court of Appeal of Gambia. In 1983 he became the Chief Justice of the Gambia, a position he occupied until 1992 when his secondment to that country ended after 12 years of meritorious service that earned him the Gambian “National Honour of the Commander of the National Order of the Republic of the Gambia” (CRG) in 1990.

He was elected as the Vice-president of the Special Appeal Court. In the same year 2003, Hon. Justice Ayoola was awarded the Nigerian National Honour of the Commander of the Order of the Niger (CON) for his meritorious service to Nigeria and humanity. The retired jurist ranked among the very few Nigerian judges that have shaped the course of judiciary and justice dispensation in Nigeria and by extension, the continent of Africa. Hon. Justice Ayoola’s well researched and analytical judgments and rulings in decided cases can hardly be faulted by his fellow Judges. Today, Hon. Justice Ayoola is one of the incorruptible judges to have emerged from the Nigerian bench. He is a Jurist of international repute who has remained a consistent advocate of law and justice both at the Bar and the Bench for more than 30 years.

Hon. Justice Mohammed Uwais, a one-time Chief Justice of Nigeria has this to say about Hon. Justice Ayoola. “In the extensive and varied appellate work, which Hon. Justice Ayoola was called upon to perform in the Supreme Court, his ability for calm and incisive analysis of the facts of a case and his percipience in identifying the legal principles, which were apposite to the resolution of the case, became apparent. His judgments written in cases before this Court illuminated the subject matter with which they dealt and gained currency amongst those practicing and those teaching the law as enlightening and authoritative expositions”. “His knowledge of the law over a very wide field, his long and extensive experience in its administration and capacity for quiet consideration and sound judgment have been of great value to this Court and its work. Always willing to play his part, his contribution to discussion of matters both in and out of the court room has always been helpful and appreciated by his brother justices”.

Apart from being a member of the Editorial Board of the Nigerian Bar Journal, in 1971, Hon. Justice Ayoola was a member of the Editorial Board of the now defunct Nigeria Monthly Law Reports (NMLR) from 1964 to 1977. He compiled the Law Reports of the Gambia and authored the Seychelles Law Digest. In 2001, he was appointed Chairman of the Committee for the Revision of Laws of the Federation of Nigeria, 1990. Since his retirement from the Bench in 2003, Hon. Justice Ayoola has been one of the vocal voices against corrupt practices both in the private and public sectors of the economy. Thus, it was not surprising when in the month of September, 2005 President Olusegun Obasanjo recommended Hon. Justice Ayoola to the Senate as Chairman of ICPC following the expiration of the tenure of Hon. Justice Mustapha Akanbi, the first Chairman of the Commission.

The former Chairman of the Independent Corrupt Practices and Other Related Offences Commission (ICPC), Hon. Justice Emmanuel Olayinka Ayoola (CON) was until his appointment, the National Human Rights Commission Chairman. Justice Ayoola retired from the nation’s Apex Court, the Supreme Court on 27th October 2003 having attained the mandatory retirement age of 70.

Hon. Justice Ayoola, who is also a renowned and respected arbitrator, still possesses the alertness, energy and intellectual capacity which stood out as his distinguishing characteristics throughout the span of his very rich career.