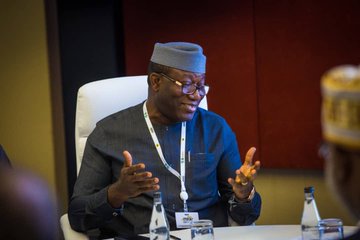 The Governor of Ekiti State, Kayode Fayemi, has tasked the Heads of Service in the six states of the Southwest to work hard and ensure the restoration of the lost glory of the civil service.

Fayemi urged them to use their positions as the number one civil servants and one of the policymakers in their respective states to return the civil service to its old functional and efficient one.

The Governor spoke on Tuesday at the opening session of a three-day Summit of the Heads of Service of Southwest holding at Lady Jibowu Hall of the Government House, Ado-Ekiti, the state capital, recalled that “the civil service used to be the pride of all in the region.”

Represented by the Deputy Governor, Otunba Bisi Egbeyemi, Fayemi urged the Heads of Service to utilize the opportunity offered by the forum to work out feasibility modalities that would strengthen the civil service.

According to a statement by the Special Assistant (Media) to the Deputy Governor, Odunayo Ogunmola, the Summit was sponsored by the Ekiti State Government in collaboration with the Development Agenda for Western Nigeria (DAWN) Commission and the Department for International Development (DFID). Fayemi described the Summit as a good initiative by DAWN Commission with a focus of creating a forum for the Southwest to deliberate on developmental issues affecting the people of the region individually and collectively.

He disclosed that the DAWN Commission was created by the governments of the Southwest States of Nigeria as the technocratic institution for sustainable developmental agenda that would midwife the development of the region.

The Chairman of Nigeria Governors’ Forum (NGF) further tasked the Heads of Service to key into the development agenda of the region, which, according to him, needs rejuvenation, revitalization and recovery of the lost glory of its Civil Service.

Describing the public service as the wheels on which government run, Fayemi stressed that its critical roles in government projects and programmes from conception to implementation presupposed that policymakers must get their priorities right from the onset.

The Governor said his second tenure in office offers an opportunity for the continuous implementation of an enduring policy document known as the Civil Service Transformation Strategy (CSTS) abandoned by the immediate past administration.

He said: “The document spells out interventions for transforming the civil service into a strong, efficient, effective, dedicated and value-based institution with the capacity to assist the government in achieving its goals and objectives.

“As vital as this document was, it was clearly abandoned by the last administration, returning the public service back to the days of inefficiency, where impunity nepotism and unfairness reigned.

“But on my return to office in 2018, contents of the document have been revisited to achieve the purpose of re-engineering the Public Service, to realize the aim it was originally created for.”

Fayemi also assured on his administration’s determination to ensure improved standard of living, welfare packages and enabling environment to enhance productivity of workers in Ekiti State.

The Governor urges delegates from the six Southwest states to use the opportunity of the Summit to savour the Ekiti hospitality and visit the tourist destinations like Ikogosi Warm Spring Resort, Ikogosi Ekiti; Arinta Waterfalls, Ipole Iloro and Olosunta Hill, Ikere Ekiti.

Speaking earlier, the state Head of Service, Mr. Ayodeji Ajayi, hailed Fayemi’s support for the achievement of the goals of regional integration by approving funds to host the Summit.

Ajayi explained that Southwest Heads of Service Summit is a strategic meeting that provides platform for drivers of the public service toengage and collaboratively discuss developmental issues within the region.

The Ekiti Head of Service said Fayemi, despite the burgeoning personnel cost, has been recruiting new teachers into public primary and secondary schools and new workers into the civil service.

He disclosed that letters of appointment of new workers would be ready by the end of December after all due process might have been concluded for their absorption.

The Chairman of the State Council of Traditional Rulers and the Alawe of Ilawe Ekiti, Oba Adebanji Alabi, said the civil service is key and germane to the success of any administration.

Oba Alabi, however, advised the civil servants to be good custodians of government documents and secrets noting that it is not good enough to see sensitive document in the hands of groundnut sellers and hawkers on the streets.

While urging civil servants to be loyal to the government of the day, the monarch equally enjoined the government to give priority attention to the welfare of workers to enable them give their best.