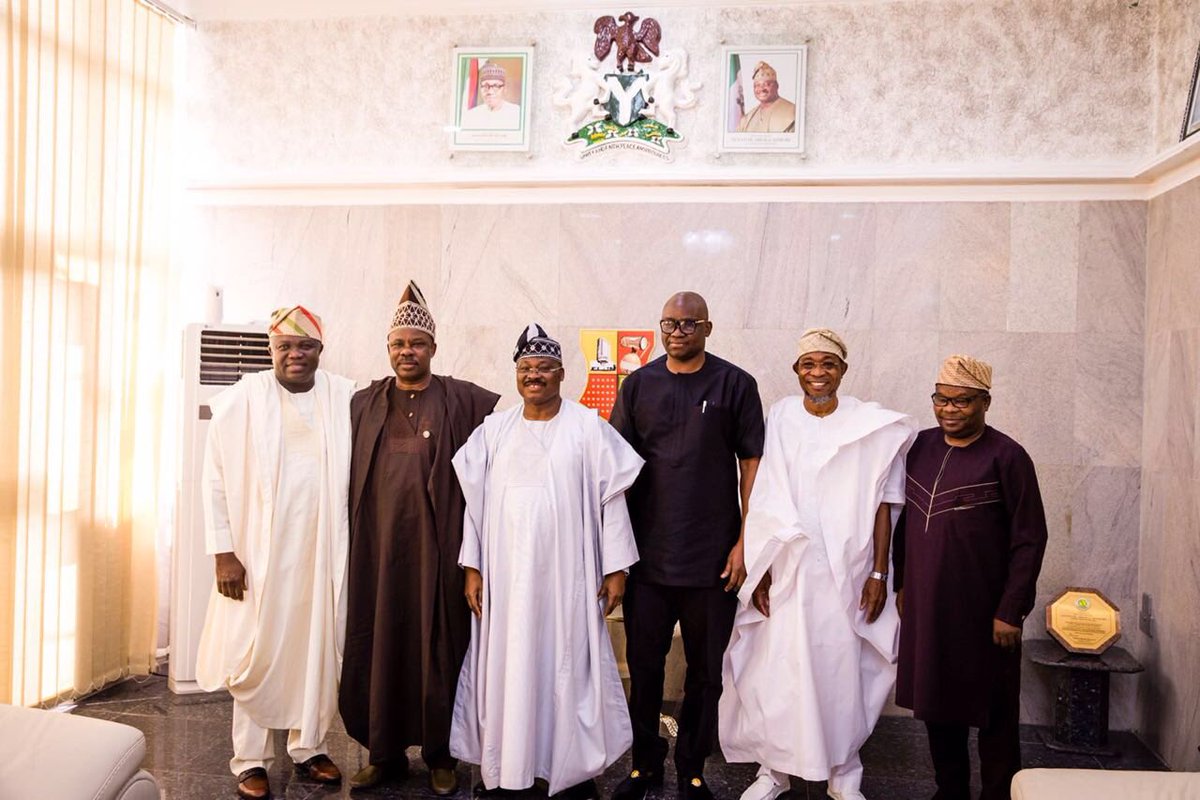 The meeting which was convened at the instance of the Governor of Oyo State, Senator Abiola Ajimobi was attended by the Governors of Ekiti, Mr. Ayodele Fayose; Lagos, Mr. Akinwunmi Ambode; Ogun, Senator Ibikunle Amosun; and Osun, Ogbeni Rauf Aregbesola; with Ondo represented by the Secretary to the State Government, Dr. Rotimi Adelola .
Also in attendance were the Director-General, NISER, Professor Victor Oladosu Adeyeye; Group Managing Director, Odua Investment Limited, Mr. Adewale Raji; the Director-General DAWN Commission, Mr. Dipo Famakinwa; and some very high level officials across the States in the Region.

Deliberations at the Forum focused on developing and agreeing on a common and integrated strategy of regional integration and economic development in Southwest Nigeria. The meeting deliberated on the need for strong and implementable decisions that would put the Southwest Region back on the path of irreversible progress.

At the end of the meeting, the Governors of the Region agreed and resolved henceforth:

1. That the optimum interest of the Yoruba people should be the prime focus of the six state governments at all times, and that all politics within the region must henceforth be guided by the philosophy of politics of development.

2. That regional cooperation, synergy and economies of scale are critical to the development of the Region.

3. That good intentions are not enough unless backed by sincerity of purpose and commitment to action.

4. That the prosperity of any constituent part of the Region is ultimately negated if other parts are not similarly
prosperous.

5. That political differences should no longer be a barrier to the economic development of the Region where the aggregate welfare of Yoruba people concerned. All the States consequently agreed to work together within the framework of a people-centred development strategy.

6. A regime of continuity, regularity and urgency of interaction was canvassed and agreed upon by the meeting. The present crop of governors therefore agreed to bequeath to their people a good legacy reflective of the visions of our founding fathers and common ancestors.

7. The States also agreed to jointly embark on collaborative programmes in areas of common interest that require immediate action in the region. These include Security, Education, Transportation infrastructure (roads, rail and water transportation), Trade, Commerce, Agriculture and Sports

10. DAWN Commission shall consequently develop programmes and activities along the identified areas of cooperation and bring them up for cooperative implementation.

At the end of the forum, all participants agreed that regional integration as a sustainable economic development paradigm presents the Southwest Region, and indeed the whole of Nigeria, a pathway out of our economic recession into economic prosperity for all.

The Forum agreed on a quarterly meeting henceforth. His Excellency, Mr. Ayodele Fayose, Governor of Ekiti State, is scheduled to host the next meeting of the Southwest Governors’ Economic Forum.