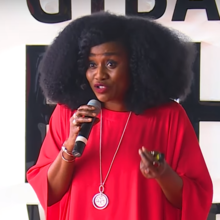 TY Bello was born on the 14th of January 1978 in Ogun State. She attained a degree in economics from the University of Lagos.

Toyin Sokefun-Bello better known as TY Bello, is a Nigerian vocalist, a song composer and an exceptional photographer. Before she dived majorly into photography and her solo music career, she was a member of the defunct gospel band Kush.

TY Bello is also a member of the Nigerian Photography Collective, Depth of Field. She is best known for her singles “Greenland”, “Ekundayo”, “This Man”, “Freedom” and “Funmise” The beautiful mother of twin boys clocked the big 40 on the 14th of January 2018.

She briefly practiced journalism and eventually ventured into photography. TY Bello emerged onto Nigeria’s musical landscape as a member of the defunct group Kush, an acronym for Kinetically Ushering Salvation into Hearts and Homes.

In October 2011, TY Bello was one of the celebrities featured in an eight-minute anti-rape video compiled by the Nigerian Ministry of Youth Development. The anti-rape video shed light on the victim of a gang rape at Abia State University in September 2011.

TY Bello organizes an annual photography exhibition to raise funds for orphans in Nigeria. She is also the director of Link-a-child, an NGO dedicated to proliferating information on orphanages in Nigeria and seeking sponsorship on their behalf.

It will be remembered that when Bello was working in Lagos where she was creating a photo shoot for the British rapper Tinie Tempah she discovered that there was a remarkable looking woman in the background.
In an attempt to find Olajumoke Orisaguna she arranged for her Orisaguna’s picture to appear on the cover of Style magazine. This kind act alone led to Ty Bello’s name being on the lips of almost everyone in and out of Nigeria.

TY Bello married Kashetu Bello in 2009. The couple welcomed twin boys named Christian and Christopher on 10 October 2014, which coincidentally marked the release of The Morning Songbook.
In July 2011, TY Bello was honored by the non-profit Communication For Change organization in a five-part documentary film series titled RedHot.

In 2009, “Ekundayo” won the Best Female Video. In 2008, she won the award for Best New Act of the Year. (Both awards were at Sound City Video Awards)