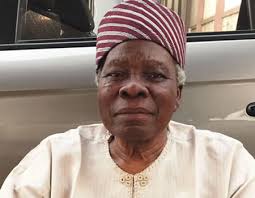 …a Scholar of Yoruba History

Prof Stephen Adebanji Akintoye is an eminent scholar of Yoruba History. He is is a Nigerian-born academic, historian and writer. It is worthy to note that Prof’s writings have been a major source of inspiration to several people across the Yoruba nation.

His most recent work, ‘A History of the Yoruba People’ (Amalion, 2010), draws on decades of new findings and thinking on Yoruba studies that challenges some previously dominant notions about the origins of the Yoruba.
Prof Banji Akintoye was born in the defunct Western Region of Nigeria in 1935. He had his secondary school education in Christ’s School, Ado Ekiti and then proceeded to study history at the University College (Overseas College of the University of London), Ibadan , which he honourably completed in 1961.

His quest for more knowledge in the field made him to pursue a doctoral degree at the University of Ibadan, where he was awarded a PhD in History in 1966. He taught at the History Department at Obafemi Awolowo University, Ile-Ife, Nigeria, where he was appointed full Professor of History and Director of the Institute of African Studies.
Prof. Akintoye has had an exemplary University teaching career spanning over decades both home and abroad. He taught African History in Universities in the United States including the University of South Florida, Tampa, Florida; Montgomery County Community College, PA, and Eastern University, St. Davids, Pennsylvania.

As a renowned Professor, he has written several books, scholarly articles as well as Journals. His most recent publication, being his highly acclaimed major work, “A History of the Yoruba People”.
As a statesman, he served as a Senator from 1979 –1983, representing the old Ondo State during the Second Republic.

He has contributed significantly to the development of the Yoruba people at large. He retired and took to writing in the United States of America where he lived after several years of lecturing.

He is currently in Nigeria and will be speaking at the second edition of the Yoruba Historical Conversations organised by DAWN Commission slated to hold on Friday the 12th of August 2016.