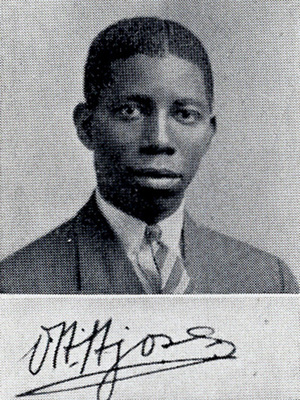 Oladele Adebayo Ajose was born in 1907 and died in 1978.
He was a Lagos prince and the Vice Chancellor of the Obafemi Awolowo University.

He was an early advocate of primary health care in Nigeria and the first tenured African professor at the University of Ibadan and in Nigeria. He was one of the earliest Africans to hold a professorial chair.

He was one of the early proponents of primary health care. This was a revolutionary idea in those days. The project served as the basis for the worldwide establishment of fish ponds.
He believed that public health issues should not only be limited to the rooms of academia but be brought to communities. He was eager and ever ready to use his professional knowledge to the advantage and benefit of the people.

Prof. Ajose based his community health care effort at Ilora, a town in the then Oyo State. There, he made sure the community was involved in every step of decision making and choice of health care service. As part of the project, the community established fish ponds mostly stocked of tilapia fish; the ponds were built to provide ample protein for the citizens.

The establishment of fish ponds around swamps later led to the creation of means of eradicating schistosomiasis in Ilora and also introduced a framework for nutrition provision in Nigeria and Africa.
Born into the Royal House of Oba Ologunkutere of Lagos in 1907. He attended Methodist Boys High School and King’s College, Lagos for secondary education. He later moved abroad and went to study at the University of Glasgow from 1927 to 1932, graduating MB ChB in 1932, taking the Diploma in Public Health in 1935 and proceeding to a MD in 1939.

He started his career as an Assistant Medical Officer for health in Lagos in 1936. He was later promoted to the position of medical officer for health. He was also the Founder of the British Red Cross Society in Nigeria. which later became the Nigerian Red Cross Society and he also founded the Infectious Disease Hospital in Lagos (commonly referred to as the IDH) through his involvement in the control of tuberculosis in Lagos.

He was Dean of the Faculty of Medicine from 1958 to 1959. After many years of splendid work at Ibadan, he was chosen and appointed as the first Vice Chancellor of Ife (now Obafemi Awolowo) University from 1961 until 1966.

Prof. Ajose’s heroic disposition and natural warmth are legendary and devoid of discrimination. He dedicated himself to serving the community at large. He had time for the Rotary Club, a club known for its services to humanity, both at Ibadan and Lagos. His altruism was also demonstrated in his concern for providing health care by founding medical clinics at Isale-Eko and Ibeshe.

In 1964, he contested the throne of Oba of Lagos with the eventual winner, the late Oba Oyekan