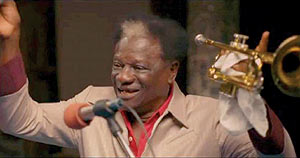 The Nucleus of Nigerian Highlife Music

DAWN Commission mourns the passage of “The Evil Genius of Highlife”, Dr. Victor Olaiya who died after a brief illness at the Lagos University Teaching Hospital on Wednesday, 12th February, 2020 at the age of 89.

Dr. Victor Abimbola Olaiya was born on December 31, 1932, in Calabar and had his elementary education in Owerri. His parents, Alfred Omolona Olaiya and Bathsheba Owolabi Motajo, came from Ijesha-Ishu in Ekiti State. He began to develop his musical talents when he joined the school band at the African College Onitsha, Eastern Nigeria, in 1946. Within a short period of time, he had mastered three different European instruments: the French horn, the B flat clarinet, and the trumpet, the instrument for which he would later become famous. Olaiya was not the first musician in his family to play a European instrument. His own father was a part-time church organist.

He moved to Lagos in the early 1950s at a time when agitation for independence by Nigerian nationalist leaders had begun to gather momentum. During this period, Olaiya played with a number of bands, including the Sam Akpabot Orchestra, the Ritz Tempo All Stars Orchestra, Bobby Benson Jam Session, and the Proper State Orchestra, in which he played the first trumpet. In 1954 he formed his own band, the Cool Cats Orchestra, which metamorphosed into the All Stars Orchestra few years later.

Many of the major highlife musicians in Lagos worked with him at one point or another. From the early 1950s to the 1960s, Olaiya played at different times with musicians including Bobby Benson, Victor Uwaifo, Bala Miller, Rex Lawson, and Fela Anikulapo-Kuti -some of Nigeria’s greatest performers of highlife music during and immediately after the colonial era. Recalling his association with Bala Miller, for example, Olaiya explained that:

“Bala Miller lived with me in my father’s house in Tinubu Square [in Lagos}. He was very highly gifted musically, a very good arranger, composer, vocalist. He played the trumpet … My mother was responsible for our meals, cooking for us. We came up together though he’s a bit older than me.”

Olaiya’s band provided the launching pad for many budding musicians of the time. One of them was Victor Uwaifo about whom Olaiya reminisced thus:

Uwaifo played the guitar in my number two band ... He was permanently playing with my number two band, while I was going around with the Miss Nigeria wagon. He was based at home with Bala Miller with my second band. He was very good, and he succeeded in creating a sound of his own. When he made his record Joromi, it catapulted him and singled him out of oblivion and shot him into limelight. He fell out with Bala Miller when I was on tour. He had
to go to central Kalkadoo where ET Arinze was playing. By the time I came back from tour he was out of the band though he had played, in the band for a very long time.

He played in my band. He was on the trumpet; he was a wonderful trumpeter. When he left my band, he succeeded [he became a great musician]. The Central Hotel management succeeded in wooing him out of my band. His sound was unique. Iworimo lworimo – it was a wonderful number. When this record came out it was a hit in all corners of Nigeria, not only in Nigeria, but West Africa.

Fela Anikulapo-Kuti, who would later evolve the Afro-beat, started his career with Victor Olaiya as a singer in the 1950s. Olaiya described his impact on Anikulapo-Kuti’s career thus:

He was in my band and he learned the trumpet. He was a vocalist in my number
two band before going overseas to continue with his musical career. Most of the early records, which he waxed in London, were some of my compositions,
“Koola O Olobito‘ and so on.

When he [Fela] created a successful sound of his own-the Afro–beat highlife, it was then that everyone started loving and knowing him. This is the secret of success in music. You want to create a distinct sound from whatever you had been playing and hearing, which is distinctive and peculiar to you alone. And once it is accepted by the general public or the music fans that means you have made it.

The closely-knit relationship amongst all these musicians in the1950s and 1960s draws attention to the relatively homogeneous nature of the idiom at its infancy, before each of the main highlife musicians of these periods went on to develop their own distinct styles. Olaiya’s Music and the Euphoria of Political Independence

As one of the personalities at the core of the emerging modem popular culture in the 1950s and 196os, Olaiya and his music thus symbolized the concept of national unity at a time when unity was a key political theme in the country. In what seemed to be an official demonstration of this belief, Victor Olaiya was chosen to perform at the independence celebrations banquet in Marina, Lagos on 1 October 1960.

He was also invited to perform the same role in October 1963 during the official celebrations that commemorated the status of Nigeria as a republic. These two events illustrate the significance of highlife music within the nationalist politics of the period.

Language and Theme in Olaiya’s Music

A good number of Olaiya’s songs are performed in indigenous Nigerian languages, with his native Yoruba language dominating. This is not surprising, considering the fact that he is fluent in the three Nigerian main languages of Hausa, Igbo, and Yoruba, a skill that has helped him to communicate across ethnic boundaries in Nigeria.

In July 2013, Victor Olaiya released a music video remix of Baby Jowo (Baby Mi Da)with 2face idibia and was received with much acclaim.

He was a man of impeccable character and an outstanding gentleman.

May his creative soul rest in perfect peace.

Reference: Politics, Identity and Nostalgia in Nigerian Music: A Study of Victor Olaiya’s Highlife on JSTOR